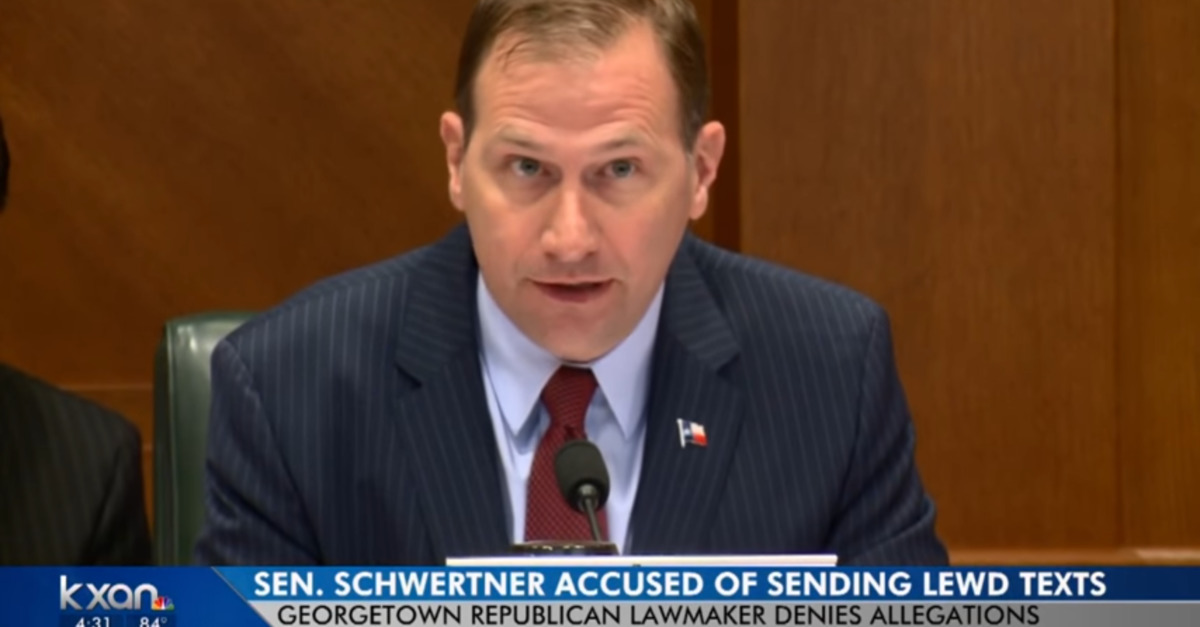 A Republican state senator’s wife filed for divorce after he was accused of sending sexually explicit text messages–including nude pics–to a University of Texas at Austin (UT) graduate student who had connected with him over an interest in healthcare policy. Nonetheless, the senator wants his constituents to know he and his wife are “reconciling.”

It seemed Charles Schwertner‘s wife Belinda might contest the idea that things are getting better, considering she just filed for divorce amidst an ongoing scandal involving her husband’s genitals. According to The Dallas Morning News, Belinda filed for divorce on January 30. Documents obtained by the outlet confirmed the divorce filing in Williamson County–where part of the City of Austin is located.

“The parties were married on or about June 7, 1997 and have ceased to live together as a married couple,” the filing notes. “The marriage has become insupportable because of discord or conflict of personalities between [both spouses] that destroys the legitimate ends of the marriage relationship and prevents any reasonable expectation of reconciliation.”

Schwertner, for his part, appears to be taking it all in stride.

“[W]e’re reconciling,” Schwertner said on Wednesday. “We love each other very much.”

The explicit text messages and nude selfies scandal erupted last September when the university announced that Schwertner was under investigation after the student in question complained. The two met at an on-campus event and university officials said they were prepared to ban Schwertner–a UT alumnus–from the campus pending the results of an investigation.

Republican Lieutenant Governor Dan Patrick subsequently complained that UT officials had confirmed the existence of the investigation to the public–after three anonymous sources leaked news of the scandal to the Austin-American Statesman.

Initial messages between the two on LinkedIn were professional in nature. But soon after that, Schwertner’s account began sending a series of sexually explicit messages and photographs that were identified as Schwertner’s penis, etc.

One series of messages reads:

Sorry. I really just wanted to fuck you. If you’d like to still sit in the audience then by all means come. This is Charles. Send a pic? I’ll send you one.

“Please stop, this is unprofessional,” the student responded. “I’m a student interested in learning about Healthcare Policy. These advances are unwanted.”

An investigation neither fully cleared nor blamed Schwertner for the messages and photographs–noting that a third party possibly had access to Schwertner’s LinkedIn account–as well as access to his Hushed account, a privacy app which allows users to send messages from various phone numbers. A forensic investigation by UT determined that Schwertner’s accounts were used but that his cell phone was not used to harass the graduate student.

Schwertner refused to fully cooperate with the investigation but did tell investigators about this alleged third party–while declining to provide their name or any other identifying information about them.

“We recognize that it is plausible that [Schwertner] sent the text messages and photograph from a device other than his personal cell phone and the third person claiming responsibility is being untruthful or does not exist,” UT’s report notes, “but we have no evidence to support those possibilities.”

Schwertner claimed vindication once the non-committal report was released.

“I do not condone sexual misconduct of any kind,” he said in the statement. “I appreciate the steadfast support of my family, friends and the voters who believed in and re-elected me… This unfortunate matter is now closed.”

Disclosure: the author attended the University of Texas at Austin. He never received nude pics from state senators.