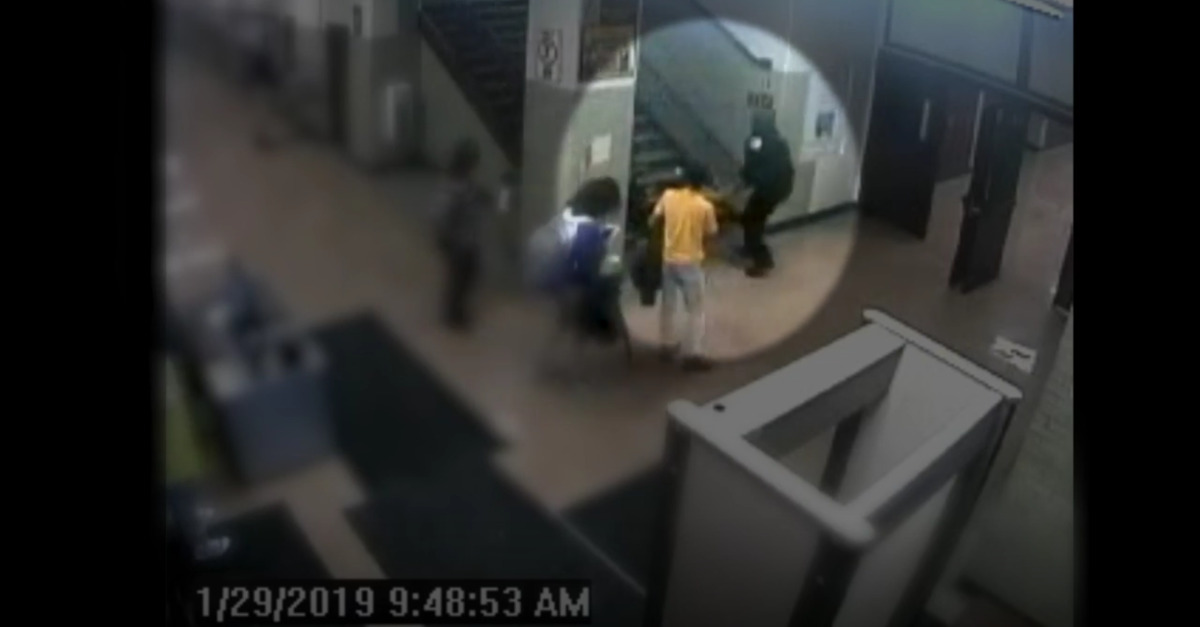 According to the Chicago Sun-Times, CPD officers push and drag the girl down a set of stairs before punching her and using a stun gun on her repeatedly. The incident occurred at Marshall High School on the West Side of the Windy City in February.

Prior to the release of the new footage, cell phone video recorded from a different angle garnered attention:

According to NBC Chicago, 16-year-old Dnigma Howard was initially charged with two counts of aggravated battery because CPD officials alleged that she was the aggressor in the situation. Howard maintained her innocence, however, telling the outlet that video actually proved it was the cops who were at fault.

“[One of the officers] forcibly put his hand, like pushed me toward the stairs, causing me to fall down the stairs,” Howard said at the time she was charged. “Which I reacted by pulling his vest. If they escorted me out the school the right way with handcuffs or something, I would have went. But [police] tried to push me down the stairs.”

Chicago area authorities under the aegis of the Cook County Juvenile Court initially took the police’s word over Howard’s–presumably because the original cell phone video of the incident only showed the aftermath of Howard fighting back–kicking the officers–in response.

Charges against Howard were dropped a week later “in the interest of justice.”

The new footage–culled from the high school’s security cameras–appears to vindicate the teenager’s story as well.

Per the Sun-Times‘ report:

The video…appears to contradict the officers’ statements that the student initiated the violent encounter after the incident to justify their use of force — again raising questions of the oversight, training and stationing of police officers in Chicago Public Schools.

In the video, one of the officers can be seen grabbing Howard and pushing her down a set of stairs. Later on, another camera captured one of the officers yanking on Howard’s leg in order to pull her down. Video eventually shows the officers punching the girl, standing on her chest and shocking her with the stun gun.

An amended lawsuit against the CPD, Chicago Public Schools and the City of Chicago was filed on Thursday.

“The Board of Education and CPD continue to fail our children,” noted her attorney Andrew Stroth. “An unarmed 16-year-old girl was beaten, kicked, punched and tasered by Officers Johnnie Pierre and Sherry Tripp.”

Stroth wasn’t quite done singling out the officers involved in the attack.

“Those officers filed a false statement,” Stroth said. “Their statements are completely untrue and are completely contradicted by what is shown on the video. The saving grace for Dnigma is that this was caught on camera.”