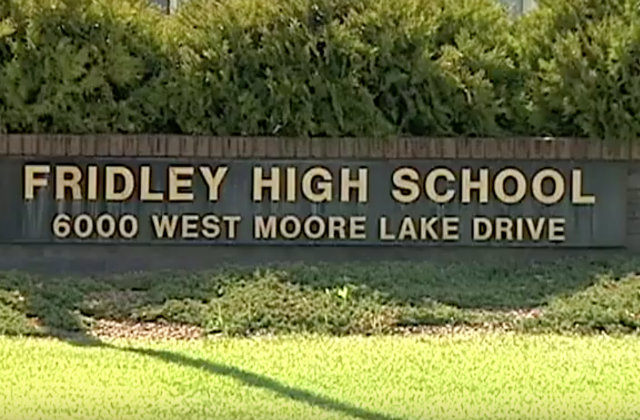 Minnesota student Chris Vasquez recently won an award, but he wasn’t happy to see how Fridley High School recognized it. Officials tweeted a group photo of winners on Thursday. That’s Vasquez on the right in the “white” t-shirt.

Look normal? Not so. Vasquez said the school edited the phrase “deport racists” from his t-shirt.

i don’t recall myself owning a white t shirt.

The shirt actually said “deport racists” and i would love know whose decision it was to edit my shirt. https://t.co/BnM69OQcDi

“FHS claims to be a school that celebrates diversity of opinion, yet censors something expressing an anti-racist viewpoint,” Vasquez wrote in a follow-up tweet.

Fridley High School apologized on Friday, saying they shouldn’t have tweeted the photo in the first place.

We sincerely apologize for the miscommunication and frustration that yesterday’s post caused our students. Please read the attached message. pic.twitter.com/svEbDJhcA1

“The intent of the edited photo was to make sure that focus remained solely on the scholastic arts awards that our outstanding students have earned,” the school said in a statement. “The communications office has acknowledged that the photo should not have been posted and apologized for the miscommunication and frustration that his has caused our students.”

This kind of thing isn’t unheard of. Two students at Wall Township High School in New Jersey said last year that officials censored their pro-Trump shirts from the yearbook. A third student said her pro-Trump quote also did not make it to publication. In that case, the district superintendent supported the teens, and said she was investigating the incident.

Two students in Missouri had a similar problem. The teens are gay, and had cheeky yearbook quotes referencing that. These didn’t make it to publication, however, and the space under their photos remained blank. In a joint statement, the principal and district superintendent admitted they removed the quotes “to err on the side of caution,” but acknowledged that they made a mistake.