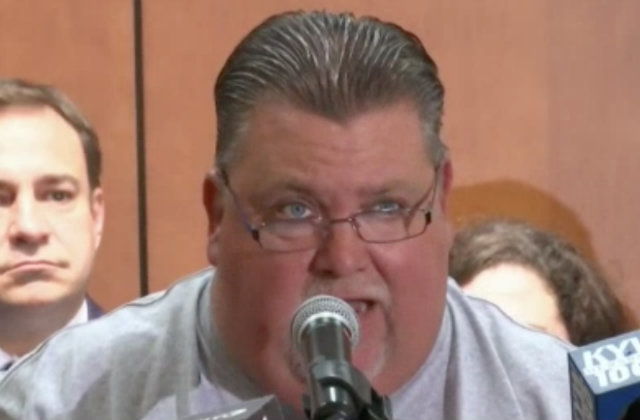 At a “Back the Blue” rally on Thursday, police union president John McNesby called Black Lives Matter activists “a pack of rabid animals.”

“When you go to work each day, you shouldn’t have to worry that a pack of rabid animals will suddenly show up at your home and openly threaten your family,” he told the crowd at the headquarters for the Fraternal Order of Police Lodge 5 in Philadelphia, according to WHYY. “These are not activists. They are racist hate groups determined to instigate violence.”

This comes after the fatal shooting of civilian David Jones, a black man who was shot in the back by a Philadelphia police officer while running from a stop. Police say Jones was armed, and had resisted commands not to touch the gun in his waistband. Reportedly, the firearm had already fallen to the ground when the cop opened fired. The officer is on desk duty, pending the results of an investigation.

Philly Police Commission Richard Ross said that the surveillance footage of the shooting “gives me pause.”

The officer in this case, identified as Ryan Pownall, also shot another black man, Carnell Williams-Carney, in the back in 2010, paralyzing him. Williams-Carney ran from police while having an illegal gun. (A federal lawsuit over the shooting failed.)

Activists, organized in part by Asa Khalif of Black Lives Matter Pennsylvania, took to Pownall’s neighborhood on August 24, posting “Wanted” signs with the officer’s face, and protesting in front of his home.

Khalif had little to say about McNesby’s “animal” statement.

“We’re not going to dignify that with an answer,” he said, according to NBC Philadelphia. “That ridiculous comment doesn’t deserve a response. I’ll simply say, ‘Justice for David Jones.'”

McNesby was recently criticized for defending an officer who had a “Fatherland” tattoo with a eagle. People worried that this was a Neo-Nazi symbol, but McNesby told Philly.com in September 2016 that it was just an eagle.