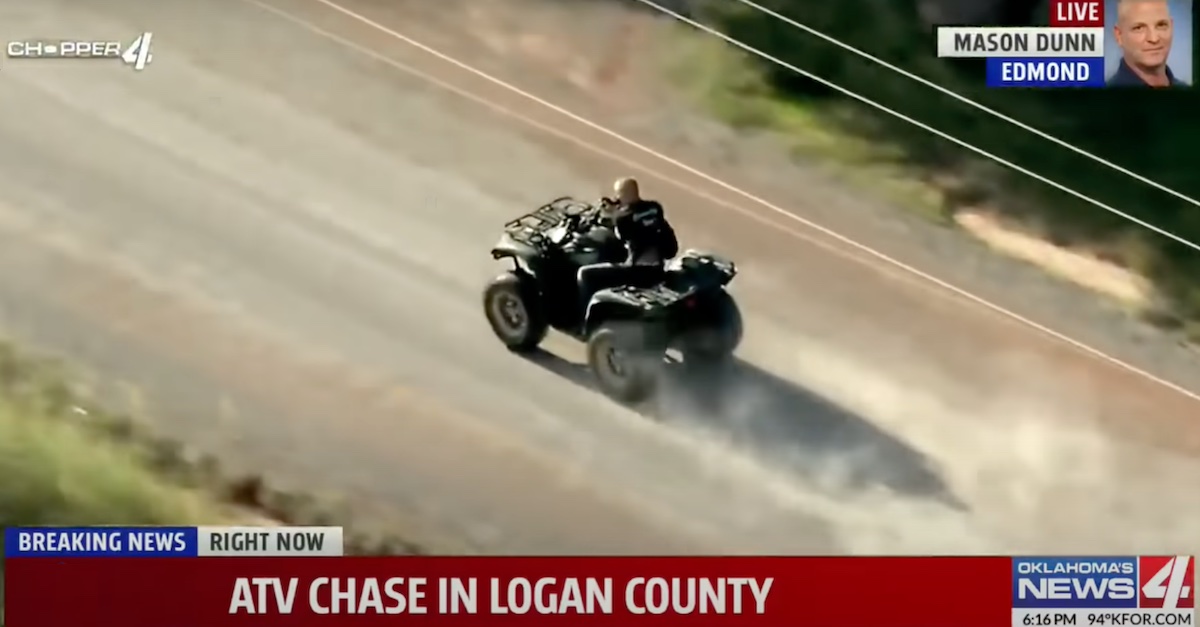 A screengrab from KFOR-TV shows a defendant identified as Lucas Strider barreling down a gravel road near Oklahoma City in what the television station’s helicopter crew described as a 70-mile-per-hour chase.

A handcuffed Oklahoma man is accused of stealing an ATV while officers were attempting to arrest him and subsequently leading authorities on a chase which reached estimated speeds of 70 miles per hour and spanned two counties. That’s according to reports from Oklahoma City NBC affiliate KFOR-TV which cited several area police jurisdictions and observed the chase from a first-hand perch.

With a KFOR television helicopter in hot pursuit, Lucas Strider led officers down paved, gravel, and red dirt roads before he wiped out on a patch of muddy water. The TV station’s chopper crew said it was at times flying the skies above at approximately 70 miles per hour while trying to keep pace with the speeding ATV. 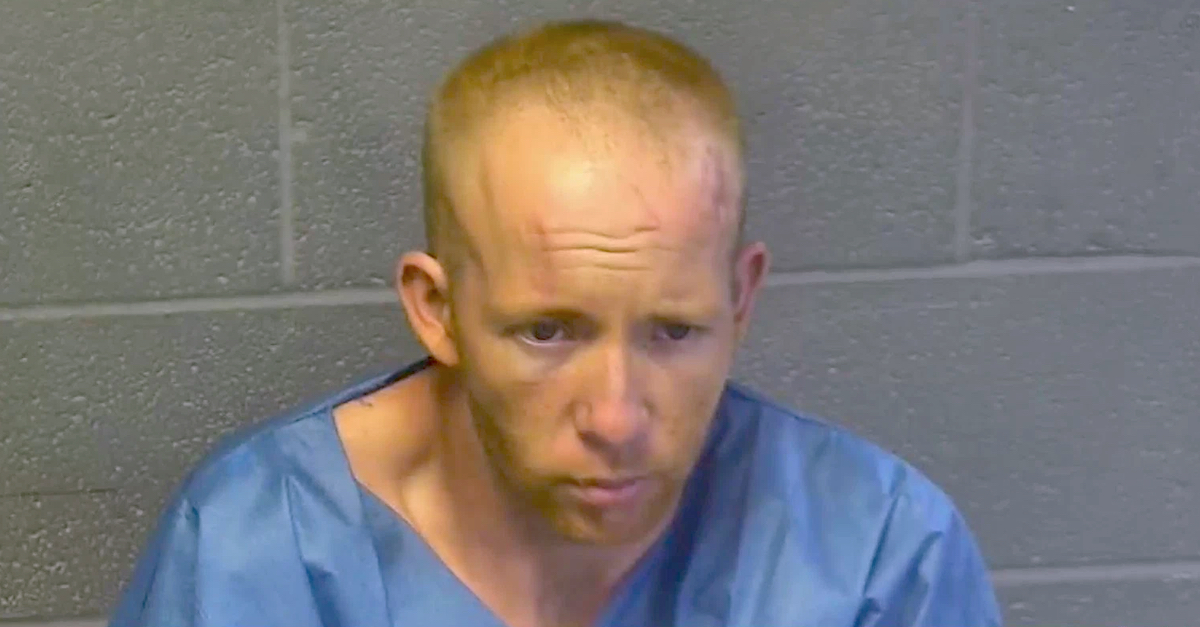 Lucas Strider appears in a mugshot provided by the Edmond, Okla. Police Department.

The Jones, Okla. Police Department was trying to transport Strider “to the Oklahoma County Detention Center on charges of grand larceny,” Officer David Cagle told KFOR. Specifically, Strider was caught on “suspicion of stealing catalytic converters and copper wire” and other such “things,” Cagle said.  (CBS affiliate KWTV backed up that account.)

But Strider took off in the process. Citing the police, KFOR said he “got the door of a patrol unit open and escaped into the woods.”

The suspect then got his handcuffed hands on an ATV and ended up in nearby Edmond, Okla., where police shared dash cam video of his the suspect’s joyride through town. That footage showed Strider cutting through parking lots, through traffic, and through a myriad of locations where the police were unable to keep up with him in regular vehicles.

“We lost him for a little bit. Ended up picking him back up and the pursuit continued,” Edmond Police Department Spokesperson Emily Ward told KFOR. “It went into Oklahoma City’s jurisdiction, back into Edmond. Ultimately, we ended up in Logan County, outside of our jurisdiction.”

During the chase, KFOR television anchors remarked that it would be difficult for police to attempt to knock Strider off course. Police oftentimes utilize so-called “PIT” maneuvers (short for Pursuit Intervention Techniques) to stop fleeing cars by nudging them off of the road. But employing such a move on Strider would almost certainly have catapulted him off the hurtling ATV and likely would have caused serious injury or death, the anchors remarked.

At one point, KFOR chopper pilot Mason Dunn noticed a car coming from the opposite direction down a dirt road. The fleeing ATV passed the car as the car’s driver appeared to slow down and veer slightly out of the way.

“He got by it okay,” one of the television anchors remarked. “It might have been a farmer going to feed, uh, the cattle — I don’t know.  It’s about that time in the evening — getting close to it.”

At one point a waiting police officer attempted to “take out” the suspect by opening a door, the television reports noted. The suspect barely slowed while skirting the vehicular obstruction. 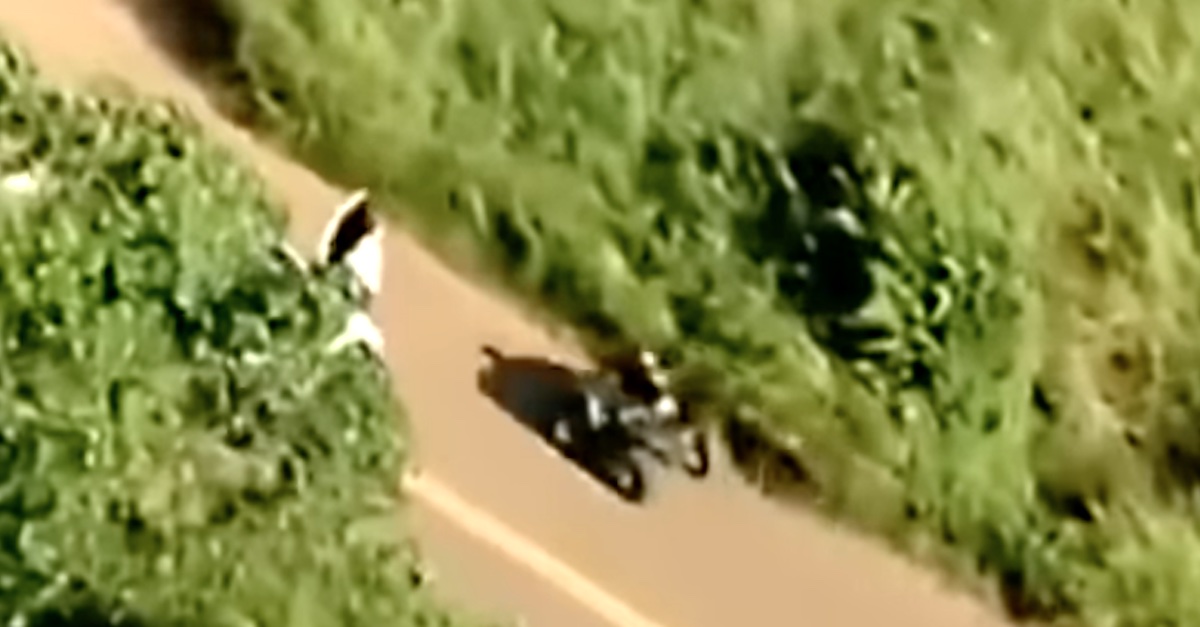 A screengrab from KFOR-TV’s coverage of the chase shows Lucas Strider barely slowing down and narrowly missing a car door a police officer swung open in an attempt to stop him.

“He got around that,” KFOR’s pilot remarked.

Various closeups of the defendant indicated he was driving the ATV using only its right handle bar — suggesting he was handcuffed. 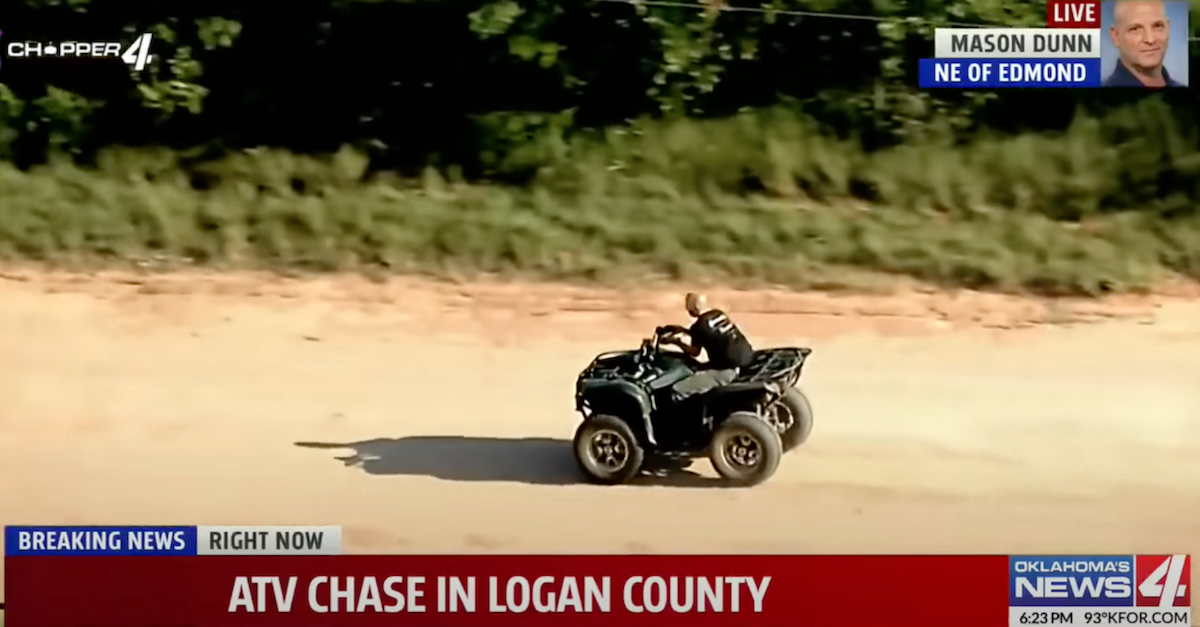 A KFOR-TV screengrab shows Lucas Strider driving an allegedly stolen ATV. The video suggests he was handcuffed, as he appears to be piloting the four-wheeler using only the right handlebar.

A mud puddle — the arch nemesis of horses and wagons and gas-powered vehicles of some (but not all) types — is what ultimately stopped the mayhem from continuing.

As the fleeing ATV rounded a bend, an officer ingeniously positioned a police department truck such that it would block a dry section of the dirt road upon which the pursuit was playing out in its final moments.  That forced Strider to steer toward a large puddle.

A massive spray of water erupted when Strider attempted to run through that puddle. And the ATV was no match for the mud. 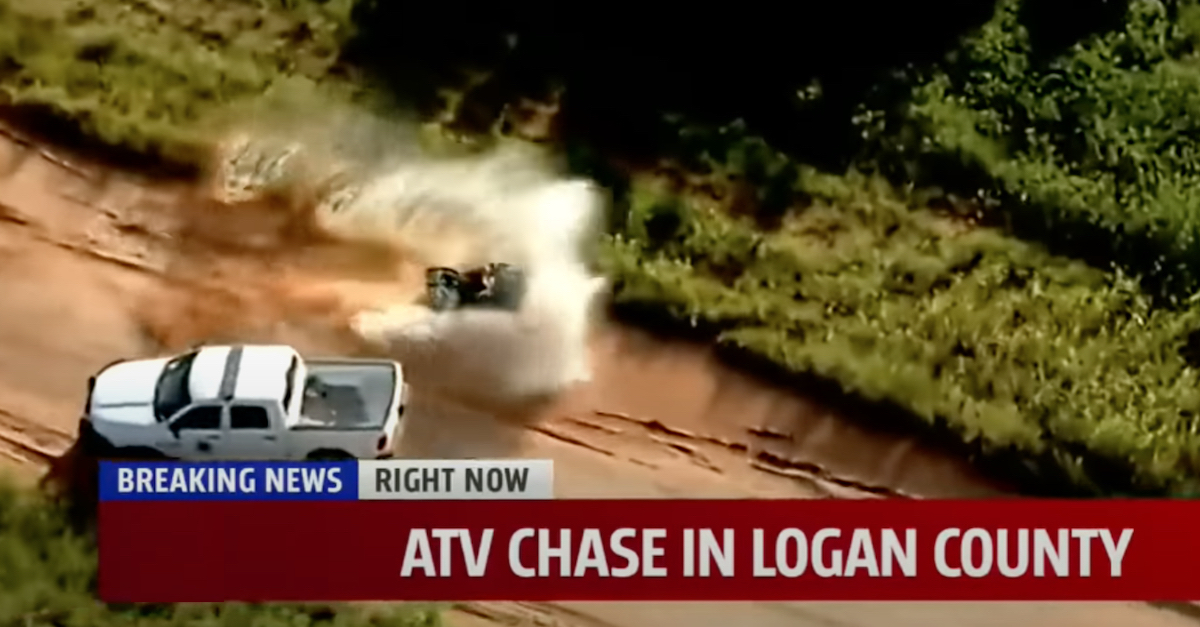 “Man down here!” said one of the anchors back at the studio.

The ATV flipped onto its right side. Strider was not thrown from the vehicle; he fell with it as it tipped into the mire of muck below. An officer with his taser drawn approached as Strider emerged from the mud puddle in a manner resembling a hippopotamus — on all fours, back to the sky, wet from head to toe, and covered with mud. 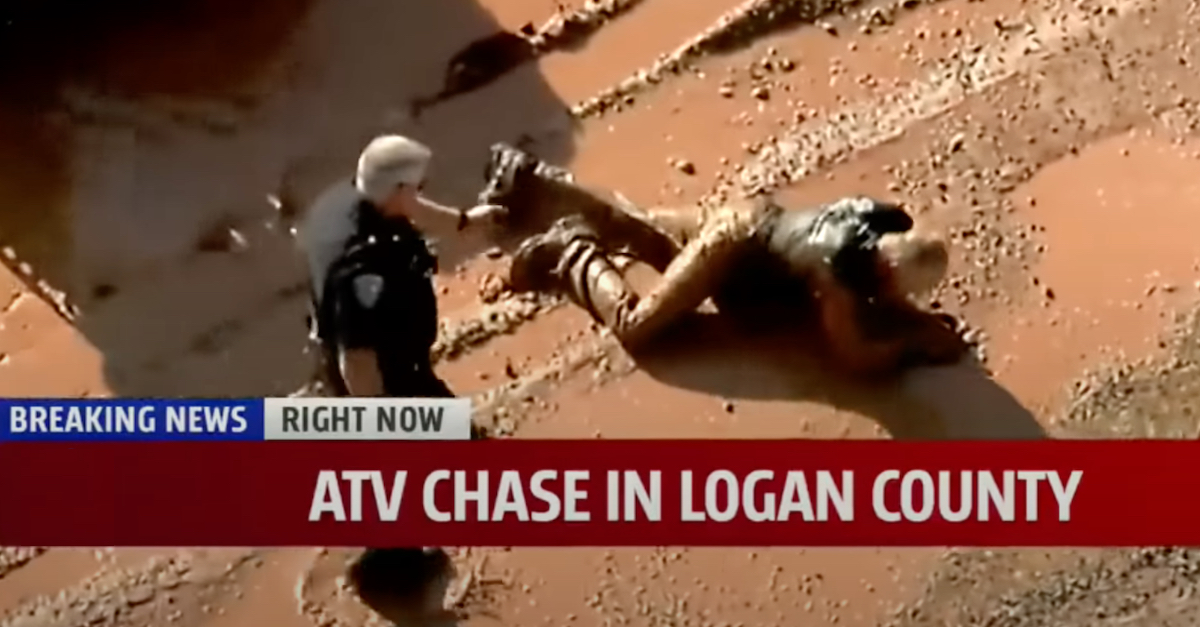 A KFOR-TV screengrab shows Lucas Strider being arrested after crashing an allegedly stolen ATV into a mud puddle.

Video of Strider’s arrest indicated that he was “fully handcuffed” during the chase, KFOR’s anchor exclaimed.

“Luckily, he didn’t get hurt; no one else got hurt,” chopper pilot Dunn observed from the skies above — while also observing that this was probably his first time covering an ATV chase.

“Hopefully he won’t get away this time,” Dunn added.

“How in the world do you stop a guy on a four-wheeler without hurting him?” one of the anchors again remarked while again pointing out the that the police made easy use of the mud puddle and not a PIT maneuver.

“His day on the run is over,” another anchor said — punctuating the situation.

Police video showed some of the man’s maneuvers through urban streets and rural roads.

Dashboard camera video from one of the pursuing squad cars showed the immediate aftermath of Strider’s wipeout. Body camera footage showed the moments of his arrest. 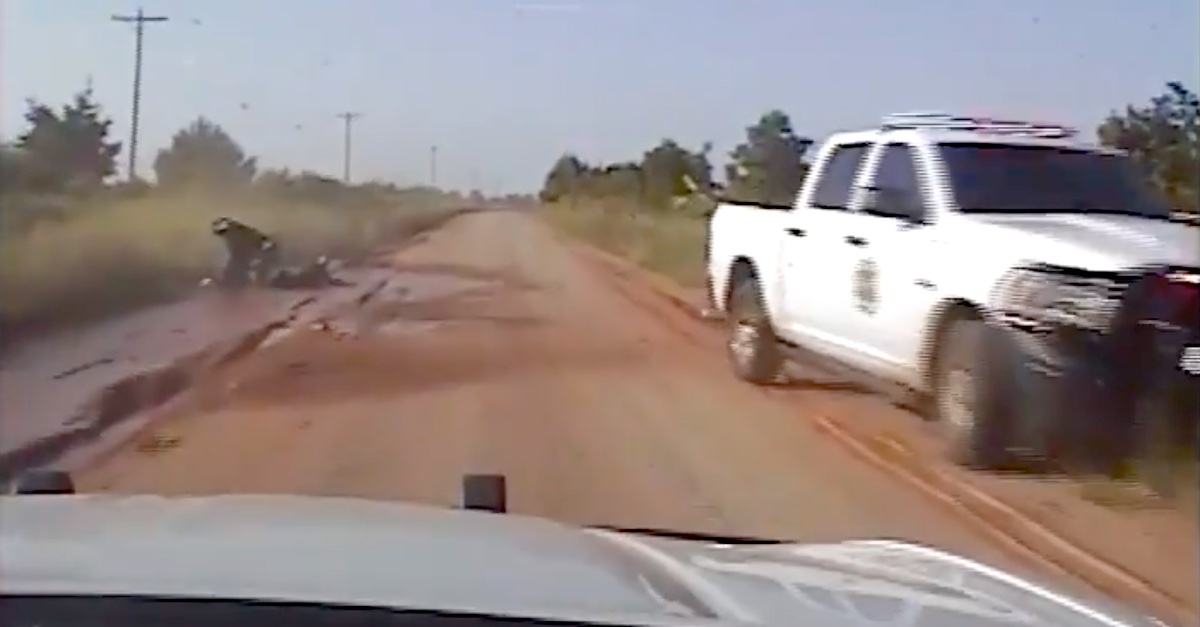 “And, he crashed,” the arresting officer said into his squad car’s radio while stopping at the scene.

“Get on the ground!” that same officer ordered after jumping out and approaching the slithering defendant. “Stick your hands straight out in front of you!” 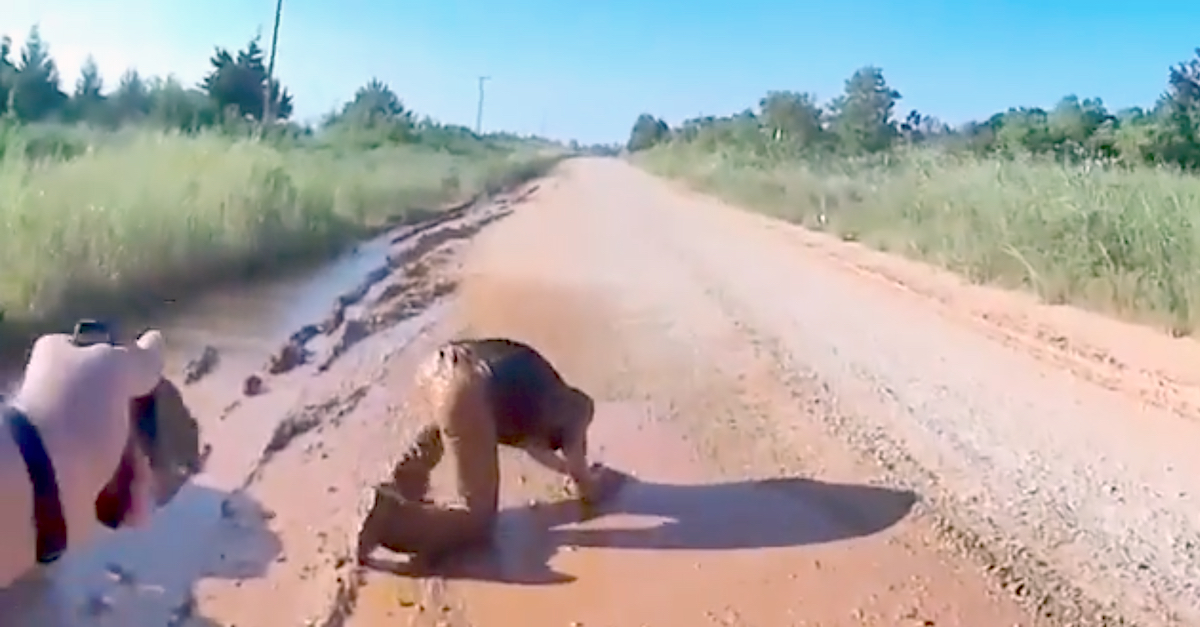 The defendant moaned something unintelligible in the process.

According to KFOR, defendant was locked up in the Oklahoma County Jail. Records reviewed by the television station indicate he had been drinking.

Watch the chase below:

Watch the body camera video below, via Fox News: