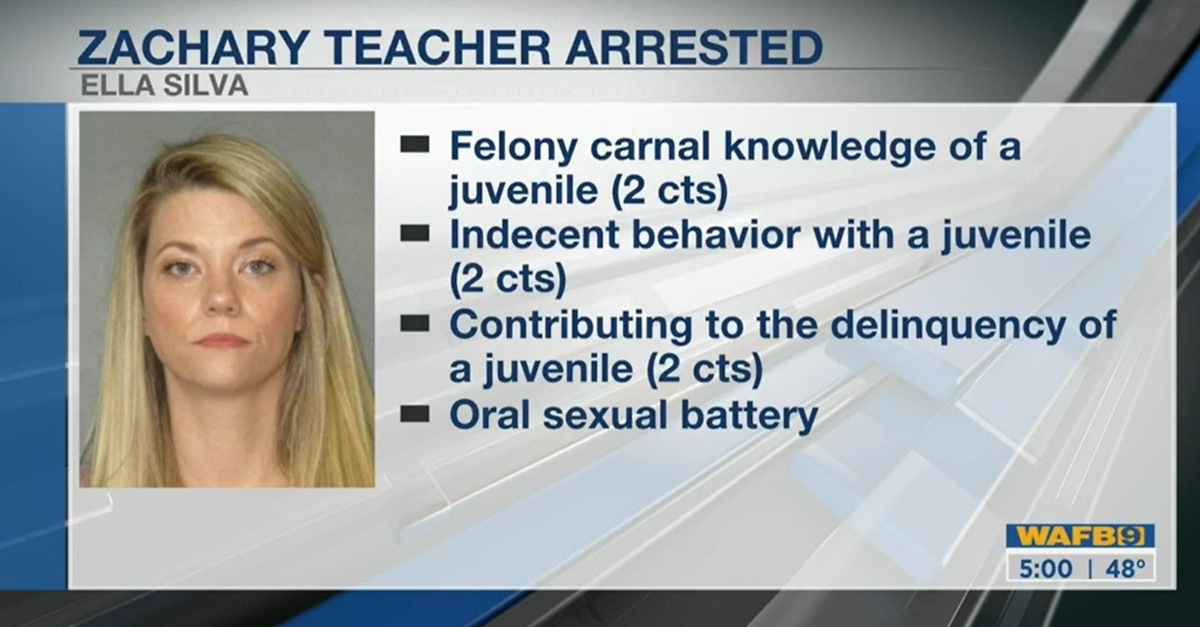 A middle school teacher in Louisiana is accused of sexually abusing a 15-year-old boy. Ellarea Breedlove Silva, 34, faces counts of felony carnal knowledge of a juvenile, indecent behavior with juveniles, and contributing to the delinquency of juveniles. All told, the alleged picture is of an adult who pursued a relationship with a minor, had sex with him at least eight times, and took steps to keep it a secret.

It turns out Silva was the teacher recently placed on leave from Northwestern Middle School in the city of Zachary. The other shoe dropped in the matter. In an affidavit (h/t WAFB), the victim said Silva first contacted him through their school email system, but they moved communication to their personal accounts so the school couldn’t track their messages. This allegedly escalated to the defendant sending nude pictures and video selfies, in which she made sure not to capture her face, the teen said according to the official account.

The boy alleged that the relationship became physical before summer 2019, according to the affidavit. He allegedly claimed that at one point, he brought him to her home without his parents’ permission, and gave him a pink E-cigarette vaping device that contained THC. The teen said they had sex a total of 8 to 9 times during that summer, authorities said.

“After the Victim decided to disclose his relationship with the Accused, the Accused and he exchanged additional text messages,” according to the affidavit. “The Accused asked the Victim not to disclose due to how his disclosure would affect her career and her family.”

A clerk with the East Baton Rogue Parish 19th Judicial District Courthouse told Law&Crime that no attorney of record is listed.

“The Zachary Police Department and the East Baton Rouge Parish Sheriff’s Office have been handling this investigation,” Zachary Schools Superintendent Scott Devillier said in a statement to WAFB. “Immediately, when it was brought to our attention, we reported it to law enforcement and placed the employee on administrative leave. No one is covering up anything, nor sweeping anything under the rug. We are following the law; and I am unable to comment beyond this information.”