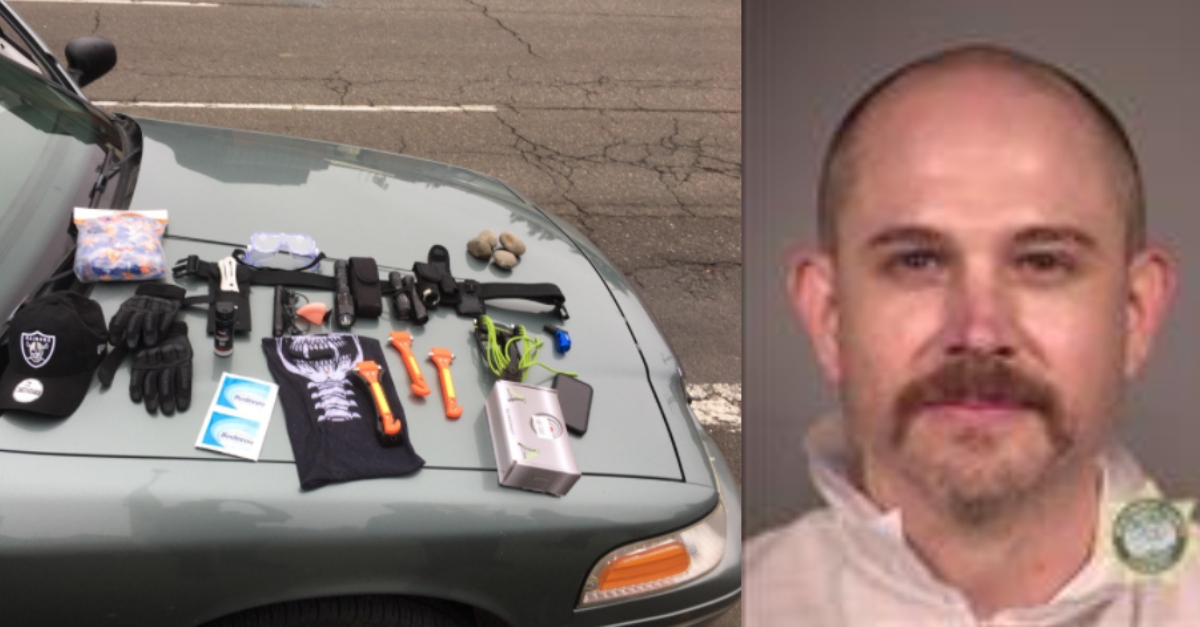 Police say this items were in the possession of John B. Russell (RIGHT) when they arrested him for pepper spraying an officer.

Police in Portland, Oregon say a man smashed a patrol car window, and pepper sprayed the interior. Now the officer who was in the vehicle is recovering, they say. The suspect was identified as local man John B. Russell, 41.

“As police officers, we know that the vast majority of community members who approach and contact us do so with no intention to do us harm,” said Chief Chuck Lovell. “However, attacks like this one remind us all that there is the potential for people to try to take direct violent action against police officers. I applaud the officer for remaining calm and locating the involved subject and thank our investigators for furthering this investigation.”

Police say that Sunday morning at 9:39 a.m., an officer at the 881 district in the Central Precinct was parked in a marked patrol vehicle. He was sitting inside going paperwork, authorities said. As this happened, the suspect allegedly approached, broke out the back window “on the hatch,” and pepper sprayed the inside. The man fled to a vehicle, and left, investigators said.

Thus ensued a brief manhunt. The victim radioed the suspect’s information, authorities said. He and other police worked together to find and stop the man six blocks away, according to this story. They say that on top of the pepper spray, Russell was in possession of items including punch tools, throwing knifes, a slingshot, rocks, and laser pointer.

Records show the defendant is locked up at the Multnomah County Jail on a count each of assault on a police officer, aggravated harassment, and criminal mischief in the first degree. He is being held on $15,000 bail. It is unclear if he has an attorney in this matter.