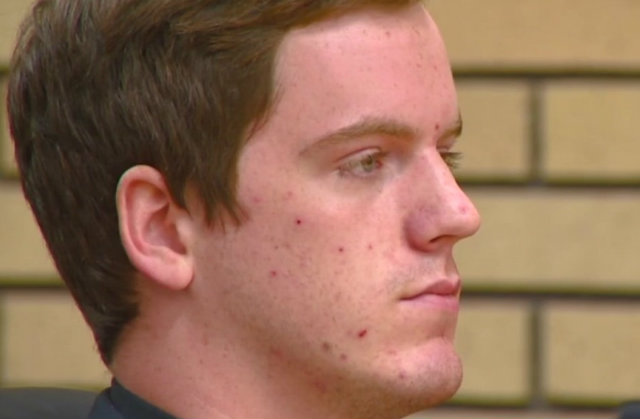 On Friday, high school football player John R.K. Howard got three years of probation and 300 hours of community service for allegedly kicking a coat hanger up a teammates’ rectum, according to The Idaho Statesman. The victim, who is black and mentally disabled, said it was the culmination of long-term bullying by coaches and other students.

But Howard has admitted to no wrongdoing. He made an Alford plea in December which is when a defendant makes a guilty plea but doesn’t admit culpability. They maintain their innocence while recognizing the prosecution has enough evidence to achieve a conviction. In this case, a rape charge was dropped in exchange for the lesser felony of injury to a child.

Howard, 19, and two other teens (whose cases are sealed in juvenile court) were charged in connection to the October 23, 2015 incident. Judge Randy J. Stoker claimed on Friday that this case was neither about racism, nor sexual assault.

“This is not a rape case,” he said, according to The Guardian. “This is not a sex case. This started out as penetration with a foreign object … Whatever happened in that locker room was not sexual. It wasn’t appropriate. There’s nothing in this record that supports anything close to the sexual allegation against this young man. In my view, this is not a case about racial bias. If I thought that you [Howard] had committed this offense for racial purposes, you would go straight to the Idaho penitentiary.”

For example, the judge argued the victim was nick-named “Fried chicken” because he said it was his favorite food.

In a deposition, the victim claimed Howard taught him a pro-KKK song, and called him the n-word as well as racially charged names like “grape soda,” “watermelon,” and “Kool-Aid.” He said the coaches called him that too “because they thought I liked it.”

Howard’s attorney Brad Calbo denies that his client racially abused the victim. He said that after the kid’s family filed a $10 million civil lawsuit against the District School District. Coaches Mike Torgerson and Rick Astle, who were named as defendants, recorded the victim. His friends and teammates were reportedly present. The teen allegedly said the lawsuit was just a money-grabbing scheme by his family. However, the teen has recanted that statement.

Lee Schlender, the family’s attorney for the civil suit, blasted the coaches for making the recording.

“Can you imagine setting a meeting with a mentally disabled child?” he told The Guardian. “And you take him and tell him, ‘We’re going to lose our farm, we’re all going to jail, you’ve got to do something for us.’ And recording it? … It’s despicable … I can’t think of a much sicker situation.”

The victim’s parents declined to speak to the outlet, but they’re apparently furious about the plea deal.

“They did not approve it,” Schlender said. “They’re outraged.” He expected the civil lawsuit to make it to trial.