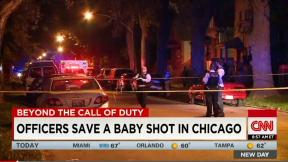 Sometimes when a life is in danger, officers must deviate from the rules. Chicago police officers John Conneely and Mike Modzelewski are surely happy they did, and now their supervisors are rewarding them for their decision to preempt protocol with judgment.

It was a fall evening in September 2015. Conneely and Modzelewski responded to a call of shots fired. As the partners descended upon the chaotic scene in the south side of Chicago, they found a neighborhood in turmoil: tears, terror and very little time.

“When we first arrived, it had to be about 100 people out on the street: screaming, yelling, people crying,” said Conneely. “The woman ran up to us with the baby, saying ‘this baby has been shot.'” Modzelewski described an unreal feeling of helplessness as they discovered the baby’s gun shot wound.

The officers broke Chicago Police Department policy when they decided to rush the 11-month-old, Princeton Chew to the hospital instead of waiting for an ambulance. Conneely and Modzelewski shared an instinctive glance that had no time for protocol. “At that time, Officer Connelly took the keys from me and got behind the wheel and I got in the backseat cradling the baby and putting pressure on its wound,” Modzelewski recounted.

The officers’ supervisors decided not to punish the partners for violating department policy. “They made a decision, and honestly it goes against protocol to remove a victim from a scene unless it’s a dire circumstance,” one supervisor said. “As it turns out it probably saved a life.”

Tragically, Princeton’s mother and grandmother each succumbed to multiple gun shot wounds. Princeton has recovered and is now being raised by family thanks to the heroic judgment of the officers.

No one has been arrested or charged in connection with the shooting.