Georgia Cops Executed No-Knock Raid on the Wrong House and Arrested 78-Year-Old Man. A Judge Said They Can’t Be Sued. 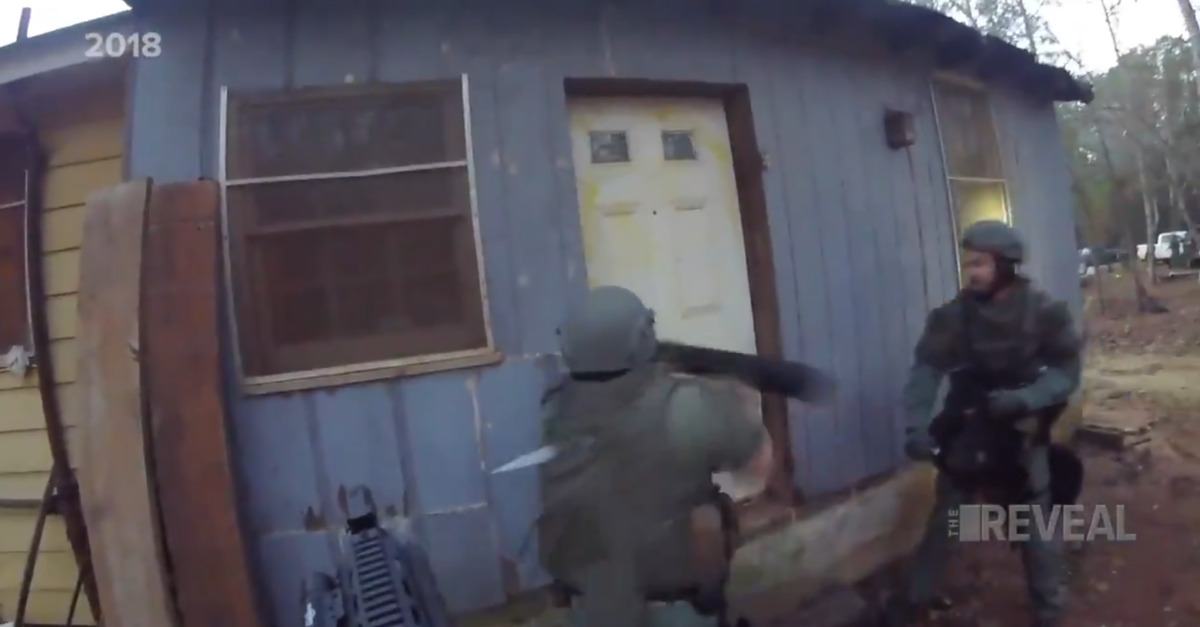 Bumbling cops in Georgia busted in and busted up the wrong house while conducting a no-knock raid in early 2018. The officers in question used flash-bang grenades moved in with guns drawn on the owner of the house, then-78-year-old Onree Norris. According to a federal judge, the officers recognized that the residence did not look like the one described in the warrant, but they took down Norris and handcuffed him. Years later, the officers may ultimately end up being immune from liability.

Norris alleged constitutional violations by way of the Fourth, Fifth, and Fourteenth Amendments as well as a statutory deprivation of Civil Rights under the color of law claim via 42 U.S.C. §1983.

When Henry [Special Response Team] members knocked in all three doors to Mr. Norris’ home simultaneously, Mr. Norris was sitting in his bedroom watching T.V. Upon hearing the thunderous sound, he immediately moved from his chair and went into the hallway. There he was met by men wearing military style gear pointing assault rifles at him.

He was then thrown to the ground, told “don’t you fucking move”, and ordered to put his hands behind his back. Given his physical condition, he was unable to do so. Officers had to force his arms behind his back to handcuff him. Weapons were aimed at Mr. Norris until the handcuffs were secured.

“Mr. Norris was then taken outside to sit on the porch of his home,” the petition continued. “After questioning Mr. Norris and demanding that he sign a document, officers removed the handcuffs. Mr. Norris is illiterate and does not know the contents of the document.”

Police were looking for a said-to-be prominent local drug dealer; instead, they arrived to find the elderly Norris.

“Something went off like a bomb in my house,” Norris told local NBC affiliate 11 Alive WXIA-TV–describing the multiple flash-bang grenades used during the SWAT raid.

Body camera footage of the raid was recently released and verifies the initial moments of the military-style operation described above:

A SWAT team raided the WRONG HOUSE with a no-knock warrant. The 79-year-old victim was watching the news in 2018 when the flash-bang grenade went off in his house. We just got the footage from a federal appeal. The full investigation Thursday after football on UpLate @11AliveNews pic.twitter.com/g9X3NQdPGs

In March of this year, U.S. District for the Northern District of Georgia Judge Michael L. Brown dismissed Norris’s complaint on the basis of qualified immunity–a controversial doctrine created by the U.S. Supreme Court that frequently shields government agents from liability for violations committed in the line of duty.

In his decision, Judge Brown conceded that the defendants acted unlawfully. The court also noted that the officers knew they entered the house that was not described on the search warrant, but proceeded on their course anyway based on prior (and ultimately incorrect) assumptions.

None of those facts weighed heavily enough in Norris’s favor, however, because the police did not violate a “clearly established” law in the same district. The “clearly established” standard is a term of art that effectively means a plaintiff must show that qualified immunity was previously denied in a case with almost exactly the same set of facts.

In Norris’s case, that means the judge wanted a citation to another instance of police breaking into someone’s home without verifying the warrant properly that resulted in a successful lawsuit. The case cited by Norris’s attorney, on the other hand, showed an officer ignoring a warrant entirely.

Onree Norris, now 81 years, old is currently appealing to the 11th Circuit Court of Appeals in the hopes that a panel of judges reaches a different conclusion.