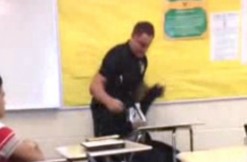 Ben Fields used to be a sheriff’s deputy in Richland County, South Carolina. That ended after he was caught on video dragging, and throwing a black high school student in October. The footage sparked national outrage, and got him fired. But now there’s been a twist in his favor. A state prosecutor declined to press charges on Friday.

“Based on all available evidence, it is my legal opinion that there is not sufficient probable cause to warrant criminal charge against Former Deputy Benjamin Fields,” Solicitor General Dan Johnson wrote in his report, obtained by The New York Daily News.

According to the report, witness testimony from students generally agreed that Fields was justified. The girl he threw had been disruptive in class, given a discipline referral, and refused to leave when ordered by the teacher. She allegedly refused to move after Field got to the classroom, and placed her under arrest for “disturbing schools.” The case against her was later dropped. The student who recorded the incident was also arrested on the same charge, but that case went nowhere, too.
–