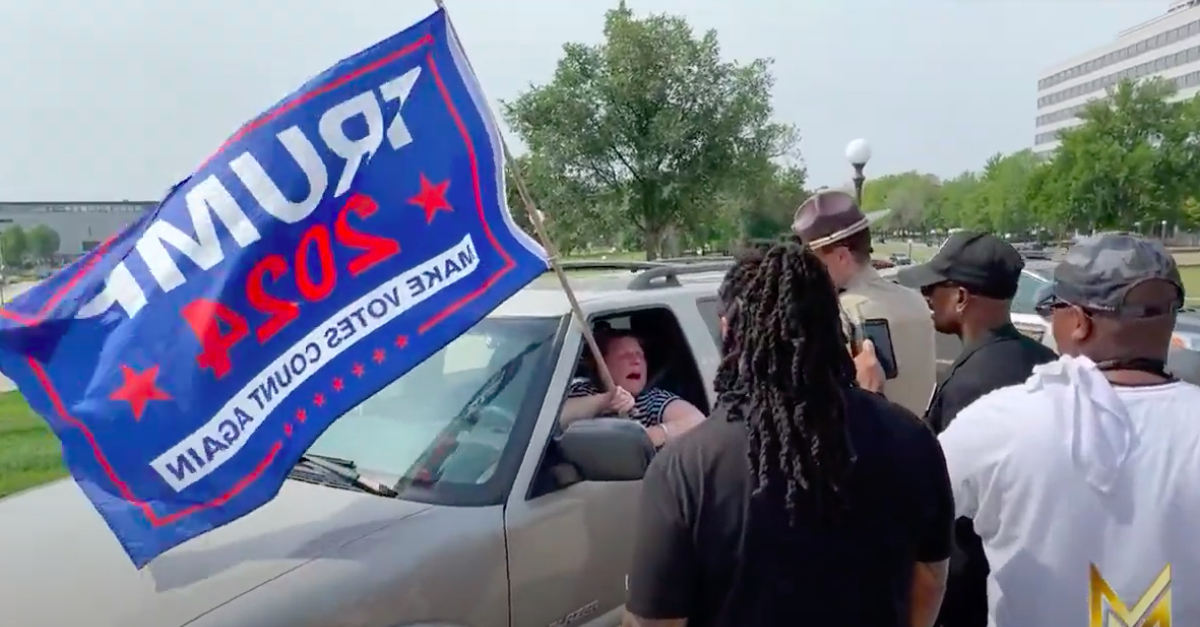 A woman identifying herself as Tammi Jo Jeka waved a Trump 2024 flag after driving on Minn. Capitol lawn

A Minnesota woman waving a “Trump 2024” out the window of an SUV drove onto the lawn of the State Capitol building Monday and interrupted a news conference being held in support of embattled Black state Democratic Rep. John Thompson, news outlets reported on Monday.

The surreal scene unfolded less than a week after a jury found Thompson guilty of misdemeanor obstruction, for resisting arrest during a 2019 disturbance at North Memorial Hospital.

Thompson reportedly said that he respected the jury’s verdict but questioned the decision to bring the case to trial. That conviction combined with prior domestic assault allegations has battered his political career.

The developments also ratcheted up racial tensions in the Twin Cities area—already stoked by George Floyd’s murder and Daunte Wright’s nearby shooting death by police—to levels further exacerbated by the reported joyride of a white woman onto restricted state Capitol grounds.

“Wild scene at the Minnesota State Capitol as a woman drives her vehicle onto the south mall, waiving a Trump flag,” Theo Keith, a journalist with FOX-affiliated news station KMSP-TV, tweeted. “The incident disrupted state Rep. John Thompson and his supporters, who are holding a news conference at the Capitol. Now the woman has fled across the Capitol’s south lawn before being stopped on MLK Blvd by police in unmarked squads.”

Wild scene at the Minnesota State Capitol as a woman drives her vehicle onto the south mall, waiving a Trump flag.

The incident disrupted state Rep. John Thompson and his supporters, who are holding a news conference at the Capitol. #mnleg pic.twitter.com/KWhmiZlFDB

Video of the incident quickly began making the rounds on social media platforms. Journalist John Croman of local news station KARE11 said the woman, who identified herself as Tammi Jo Jeka, was honking her horn and yelled at state troopers, “I’m a white woman! There is only one race!”

Woman with Trump flag pulled over by state troopers after driving across the State Capitol lawn, during pro-Thompson press conference. She’s shouting at troopers “I am a white woman! There is only one race!” pic.twitter.com/jY9iOGWGur

Footage of the incident appears to show the woman driving onto the Capitol lawn—which is a restricted area—and then parking a tan SUV at the foot of the Capitol steps. She then sticks the flag out the window and begins waving it back and forth. Thompson supporters then gather around the driver’s side window and tell her she can’t be there. When one of the supporters tries to grab the flag, the woman can be heard yelling, “You see that shit,” and repeatedly honks the horn while screaming something indecipherable.

When state troopers arrive a short while later, one of the event attendees can be heard saying, “Please get her out of here. I’m afraid for my life.”

At several points the woman compares herself to George Floyd, saying she was trying to be peaceful. She then can be seen driving away from the steps and starting to circle the Capitol lawn directly on the grass.

A Black man on the scene can be heard approaching one of the officers to ask why she was allowed to drive away without being arrested, suggesting she was being treated differently because of her race.

“What she did to us over there was extremely dangerous,” the man can be heard saying.

“I agree,” the officer can be heard replying.

“She could have run us over,” the man continued. “If she was anything other than a blond-haired white woman, she wouldn’t be having that conversation right now. She is dangerous.”

The officer responded by telling the man that they had requested a mental health unit to evaluate the woman.

Several minutes later, Jeka can be seen in her car talking to someone that may be a mental health worker. She is smoking a cigarette and holding a copy of the Bible.

“If she has mental health issues, which she probably does, this same treatment needs to be spread across the board for everybody, no matter their race or color,” a Black man can be heard saying. “They come at the car with us with guns drawn, ready for whatever, not ready to talk and listen like they did for her.”

The video’s unidentified narrator—uploaded on the YouTube channel Snack Squad—says that police told them that Jeka was being “detained” but had not been placed under arrest.

Nearly two hours after the woman drove onto the Capitol lawn, police allowed the woman to collect her belongings before walking her over to the backseat of an unmarked police car. She was not cuffed and just prior to getting in the vehicle, she turned to the crowd that had gathered and threw her hands in the air yelling, “As above, so below! Burn in hell fuckers.” She then used both hands to give the middle finger and got into the car.

“Oh they let her say that too,” a male voice can be heard saying. “This is white supremacy at its best.”

The woman then laid down across the back seat, prompting bystanders to yell, “Please treat her like she is Black,” and “White privilege lives here.”

The Minnesota Department of Public Safety did not immediately respond to Law&Crime’s questions about whether Jeka was or is likely to be charged with a crime.

Watch the full video of the incident below:

[image and video via YouTube/Snack Squad]