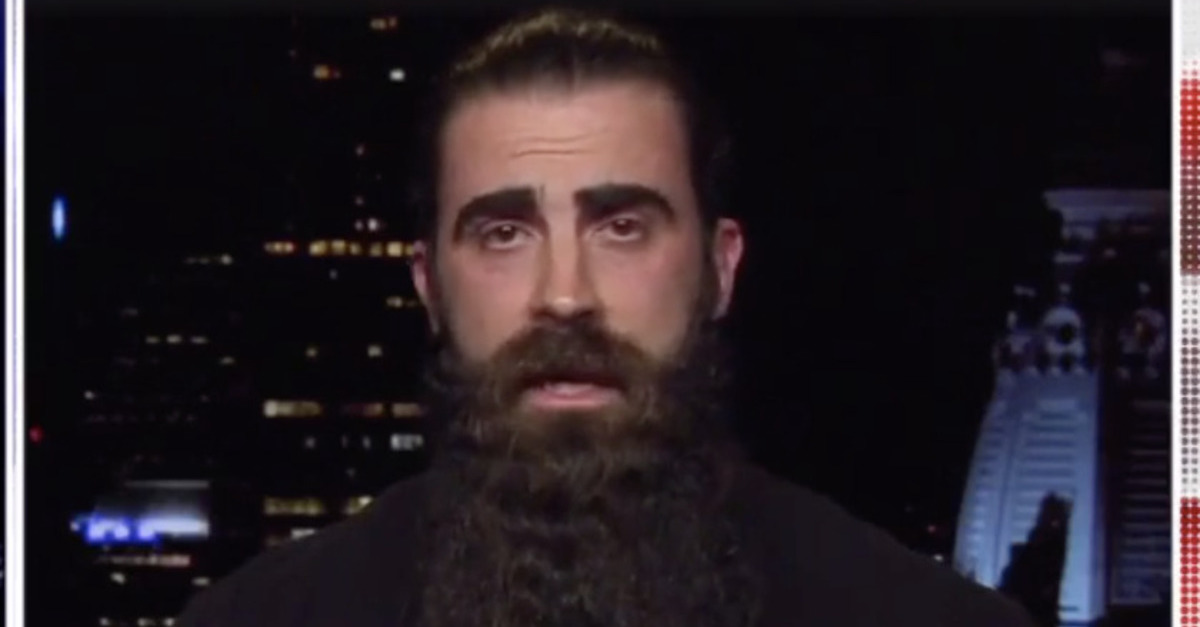 It’s been quite a week for a New Jersey gym owner determined to open his business in defiance of New Jersey’s executive orders combatting coronavirus. This is a story of a Fox guest-turned-local-celeb-and-MAGA-hero.

“So you know that your Governor Murphy who has all power and can do whatever he wants to you has said that you can’t do this. Why are you doing it anyway?” Carlson asked.

Smith, casting himself as a patriot and freedom-fighter, replied: “My business partner and I have plans to keep people safe. So far, we think this is a gross violation of Constitutional rights. The Fourteenth Amendment states that no state shall pass any law that infringes on the rights of citizens.”

(For reference, the 14th Amendment was one of three Lincoln-era Constitutional Amendments that guaranteed legal equality to former slaves, and guarantees due process rights to all people.)

Smith also told viewers that being “forced into our homes” is “not healthy for our immune systems,” and explained that his defiance of the shutdown order will be, “grounded in the ideals of civil disobedience.”

Smith had started a fundraising page shortly before his big night with Tucker Carlson. The messaging on that GoFundMe page seemed significantly less wary of government involvement. Smith focused on the lack of government assistance:

However, because Atilis Bellmawr has not been in operation for a full-year and does not have a full-time staff, we do not qualify for any bailout money from the government. In addition, our landlord and other service providers are not providing any additional relief to offset the effects of the shutdown.

Since Smith’s appearance, the page reached at least $17,000 in donations. A different GoFundMe, which focuses on covering the costs of legal fees, has raised more than $40,000 so far.

Those on the scene at Monday’s gym-opening gave Smith the celebrity treatment:

Ralliers are treating Atilis Gym owner Ian Smith like a local celebrity. People are chanting his name and taking selfies with him. pic.twitter.com/NIpUaR11oQ

Crowds support owner of @TheAtilisGym Ian Smith shouting “USA USA USA” after seeing police step aside allowing his business to open saying “Have a good day. Everybody be safe.”@TuckerCarlson deserves so much credit for highlighting this.#NewJerseyStronghttps://t.co/x4akBScm9q

And even the cops seemed to be enamored with Smith, amicably telling the crowd, “Formally, you are all in violation of the executive order,” but adding, “On that note, have a good day, everybody be safe.”

Speaking of the crowd, a few observers noticed that there appeared to be some “Three Percenters” present.

5/ The very good Fox-watching people at Atilis Gym in NJ include some Three Percenters, which is a far-right anti-government militia group pic.twitter.com/pBAOJj9tM8

Governor Murphy had some words of warning for those planning continual defiance of state law. In his daily coronavirus briefing on Monday, Murphy said, “If you show up at that gym tomorrow, there’s going to be a different reality than showing today.” Murphy added, “I also don’t want to start World War 3.”

Smith and his business partner opened the gym again on Tuesday this time sporting a T-shirt with a police logo.

Co-owners of Atilis Gym in Bellmawr, NJ displaying the summons served upon them by local police. Day 2, and counting. The man on the right, Ian Smith, appeared on Tucker Carlson last night, end of day 1. pic.twitter.com/ywQltiAXLF

Many praised Smith for sticking it to Murphy.

This time, though, the police made an arrest:

LANGUAGE WARNING: at least one person arrested when he exited Atitlis Gym in Bellmawr. The charges are unknown at this time @CBSPhilly pic.twitter.com/dv8WvVgKvP

The saga continues. Smith once again opened the gym, while the event was captured on video.

At Governor Murphy’s daily press conference, the subject of Smith’s having opened up his gym was a topic of much concern. The governor said that he expects businesses to follow what law enforcement says. A third summons was issued to the gym owners on Wednesday, and new charges were levied for causing a “public nuisance.” Murphy also mentioned that the Department of Health, in addition to local police, has some jurisdiction over Smith’s refusal to follow shuttering orders.

Smith is a convicted felon

“I’m not worried about jail,” Smith’s partner Frank Trumbetti told press earlier in the week. But Smith himself has already had a serious history with law enforcement. In 2008, Smith was convicted of vehicular homicide and sentenced to more than five years in prison. He drove the morning after a night of drinking, ran a stop sign, and killed 19-year-old Kevin Ade.

Please listen. What we stand for is far bigger than me. I understand people’s resentment and hatred towards me. All I ask is you listen to the details and make your decision based off of that. Regardless, what stand for as a community at @atilisgymbellmawr remains unchanged. Day 3 here we come.

Smith posted a video on Wednesday. He told the story of having been so drunk that he awoke in the morning without realizing he was still intoxicated. Smith explained that he’d been a victim of misinformation, saying no one had ever explained the dangers of waking up drunk. “It was always don’t drink and drive,” Smith said, “and we didn’t drink and drive.” Penitent about causing the death of a young man, Smith vowed to “try to live a good life and give back and try to promote as much love and positivity in the world as I can.”