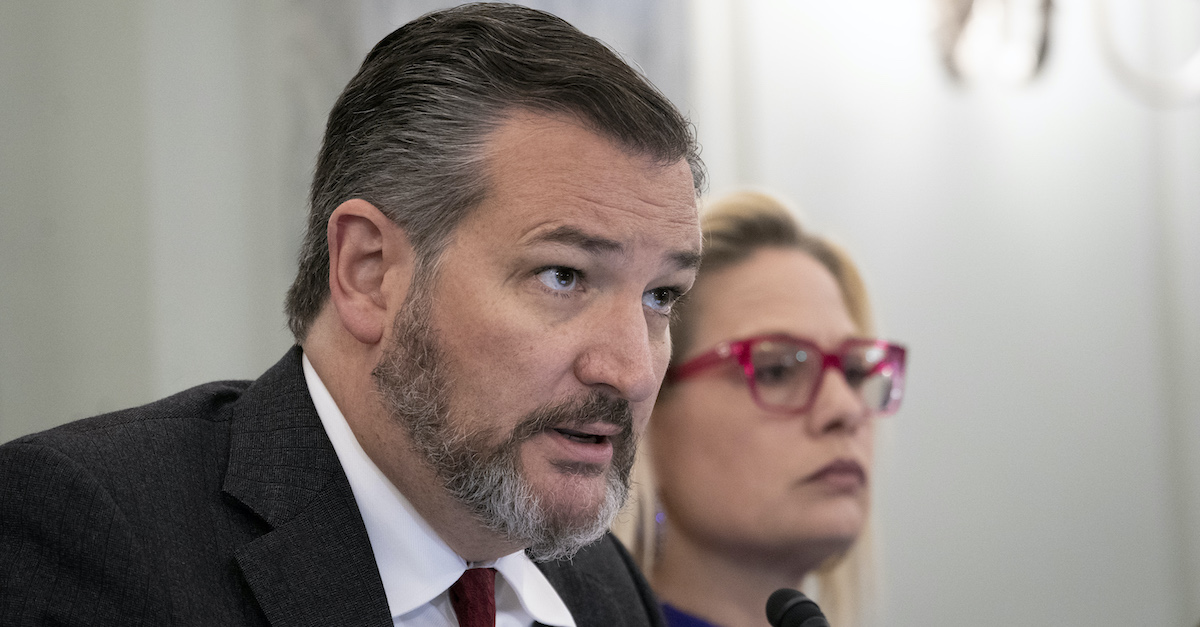 It started when Sisolak signed an emergency regulation adopted by his state’s Board of Pharmacy which limits, but does not totally ban, the “prescription and issuance” of chloroquine and hydroxychloroquine, the two drugs at issue. The purpose of the emergency regulation was to prevent hoarding and to ensure the medications remain available for “necessary medical purposes,” the governor said.  The regulation effectively bans the dispensing of the drugs to outpatients with COVID-19 diagnoses but does allow the drugs to be dispensed to inpatients “in an institutional setting.”  The emergency regulation is best summed up legally as preserving the use of the drugs for the most serious COVID-19 patients.  (Early reports which characterized the move was a “ban” appear to conflict with the clear language of the regulation.)

“At this point in time, there is no known cure for COVID-19 and we must not withhold these drugs from those who need them,” the governor said in a tweeted announcement. The chief medical officer of the Nevada Division of Public and Behavioral Health said the state needed to “deal with facts, not fiction” as to the drugs.

Today, I signed an emergency regulation limiting the prescription & issuance of two drugs that have unproven results with treating COVID-19. While these drugs serve necessary medical purposes, this regulation protects the Nevadans who need them and prevents unnecessary hoarding. pic.twitter.com/dGMDJfdNAW

Yet even in Washington, medical experts have expressed tempered expectations. On CNN, Dr. Anthony Fauci, the Director of the National Institute of Allergies and Infectious Diseases and a member of the White House Coronavirus Task Force, said that there is “anecdotal data that [the drugs] wor[k],” but there needs to be more testing. The administration’s COVID-19 response coordinator, Dr. Deborah Birx, cautioned that while some countries have had success with the new treatment, “that doesn’t mean that it will show promise in Americans. It showed promise in the test tubes.” A study of 30 patients in China indicated that hydroxychloroquine really had no effect on the treatment of coronavirus. Plus, while President Trump claimed the drugs “have been approved” by the FDA, they have not, at least to fight the novel coronavirus. Vice President Mike Pence indicated that the FDA is in the process of “approving off-label use” for hydroxychloroquine.

This was the Cruz missive that got the ball rolling:

During this crisis, we should listen to the science & the medical professionals. The opposite approach: the Governor of Nevada, practicing medicine w/o a license—trying to score political points against Trump—& prohibiting NV doctors from prescribing medicines to treat COVID19. https://t.co/D4FK51BccP

Nevada Governor Sisolak tried to break much of this down for Cruz on Twitter and pointed out that Cruz’s own state adopted tougher regulations than Nevada just did:

Hey, Senator! 👋 I’m glad we agree that it’s critical to trust science & listen to medical professionals…now and always. In a time of panic, misinformation can be dangerous, so let me help you out (make sure to read the whole thread)… https://t.co/F03B56l8L7

1. These regs were developed by the Nevada Board of Pharmacy in coordination with NV’s Chief Medical Officer and our COVID-19 Medical Advisory Team. They’re medical professionals. Really smart folks. I trust them.

2. As written in the regs, doctors can still administer these drugs to admitted patients, including #COVID19 patients, if they deem it medically necessary. Once again, leaving it to the medical professionals 🧑🏽‍⚕️👨🏼‍⚕️. Check out the regs here: https://t.co/pbY6jMZjl3

3. On March 20, the Texas State Board of Pharmacy adopted even stricter restrictions than NV for the same drugs. To help you learn how your state took stricter moves to limit these drugs (plus a couple others!), I’ve included this link: https://t.co/Yg2zbccUOA

3. On March 20, the Texas State Board of Pharmacy adopted even stricter restrictions than NV for the same drugs. To help you learn how your state took stricter moves to limit these drugs (plus a couple others!), I’ve included this link: https://t.co/Yg2zbccUOA

4. Here’s the deal: medical professionals don’t want bad actors to harm Nevadans (or Texans!) by creating a shortage of critical drugs for those that need it the most.

We’re in a pandemic. As leaders, let’s stand together as Americans to forget the partisan politics, put the health & safety of our citizens first, & commit to sharing accurate information. We can mitigate and stop #COVID19 if we do it together.

On March 13, 2020, Governor Sisolak declared a state of emergency in response to the coronavirus crisis. Under Nevada law, the Governor has broad powers during a state of emergency, including the ability to “perform and exercise such other functions, powers and duties as are necessary to promote and secure the safety and protection of the civilian population.” The Governor has wide authority to direct the State’s response to an emergency, such as a viral outbreak, including having medical personnel who are not even licensed in Nevada come to his state to provide aid without the fear of violating the law. Restricting the prescription and potential uses of medication because their safety and effect hasn’t been validated, and even doubted in the medical community, would seem to make Sisolak’s decision not only legal, but perhaps, correct.

The Board of Pharmacy, where this issue started, has the authority to”[a]dopt regulations governing the dispensing of poisons, drugs, chemicals and medicines.”  Under Nevada’s Administrative Procedure Act, the Board of Pharmacy, like all state agencies, has the power to enact emergency rules.  The governor, rather than the commissioner or head of the agency, has to sign off on all Nevada emergency regulations.  Emergency regulations are of limited duration.

The emergency regulation may cause friction with Nevada’s 2015 “right to try” law. (President Trump signed the federal equivalent of the law in 2018.)  Nevada’s laws allow for terminally ill patients to have access to certain drugs if particular conditions are met. First, a person must be in “terminal condition,” which means he or she must have “an incurable and irreversible condition that, without the administration of life-sustaining treatment, will, in the opinion of the attending physician, result in death within 1 year.” Some COVID-19 patients arguably meet that definition.  The law allows such patients access to experimental drugs which do not have FDA approval, but the drugs must have “successfully completed Phase 1 of a clinical trial.” Chloroquine and hydroxychloroquine have been approved as legitimate treatments for other illnesses, but not COVID-19.  The “right to try” statute is short and contains little immediate guidance on whether the “clinical trial” must be directly related to the illness the drug is sought to treat or whether any such trial or approval is sufficient.

Not every state is clamping down on the drugs in question. Gov. Andrew Cuomo (D-N.Y.) announced that the FDA gave New York the green light to start testing hydroxycholorquine with zithromax as a way to treat those diagnosed with COVID-19.