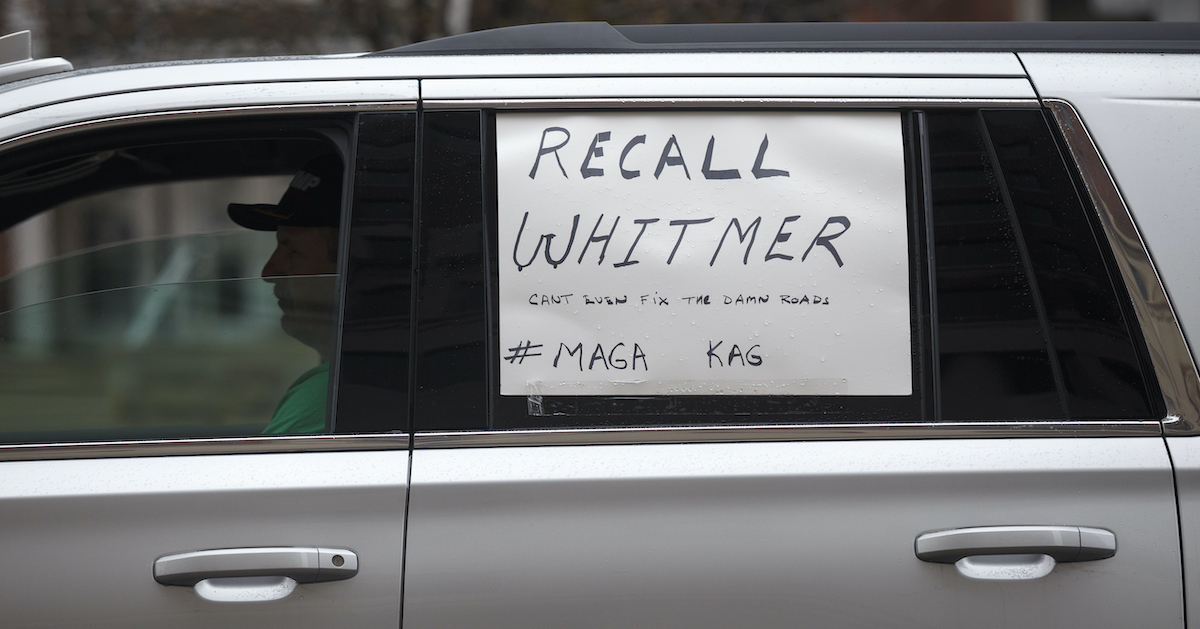 A man sits in his car while driving toward the Capitol along with many others to express their unhappiness with Governor Gretchen Whitmer’s Stay Safe, Stay Home executive order on April 15, 2020 in Lansing, Michigan. Governor Whitmer issued the order which was expanded until April 30 to continue to help slow the spread of coronavirus (COVID-19).

Michigan Gov. Gretchen Whitmer, a Democrat whose COVID-19 shutdown executive orders have faced challenges on multiple fronts for the past several months, got some bad news from the Michigan Supreme Court on Friday.

Justice Stephen Markman was clear on this point after acknowledging, right out of the gate, that the COVID-19 pandemic is “one of the most threatening public-health crises of modern times.”

Markman wrote that the court concluded that Whitmer “did not possess the authority under the Emergency Management Act of 1976 (the EMA), MCL 30.401 et seq., to declare a ‘state of emergency’ or ‘state of disaster’ based on the COVID-19 pandemic after April 30, 2020.”

Secondly, the justice wrote, Whitmer “does not possess the authority to exercise emergency powers under the Emergency Powers of the Governor Act of 1945 (the EPGA), MCL 10.31 et seq., because that act is an unlawful delegation of legislative power to the executive branch in violation of the Michigan Constitution.”

As a result, the state’s high court noted, Whitmer’s executive orders in response to the COVID-19 pandemic “now lack any basis under Michigan law.”

At the end of that line, Markman added a footnote citing Supreme Court Justice Neil Gorsuch.

Our decision leaves open many avenues for the Governor and Legislature to work together to address this challenge and we hope that this will take place. See Gundy v United States, 588 US ___, ___; 139 S Ct 2116, 2145; 204 L Ed 2d 522 (2019) (Gorsuch, J., dissenting) (“Respecting the separation of powers forecloses no substantive outcomes. It only requires us to respect along the way one of the most vital of the procedural protections of individual liberty found in our Constitution.”).

In closing, the Michigan Supreme Court reiterated that Whitmer lacked the authority under the Emergency Management to declare a state of emergency due to COVID-19 after April 30. In addition, the court said that Emergency Powers of the Governor Act violates the state’s Constitution because it “purports to delegate to the executive branch the legislative powers of state government–including its plenary police powers–and to allow the exercise of such powers indefinitely.”

“As a consequence, the EPGA cannot continue to provide a basis for the Governor to exercise emergency powers,” the court said.