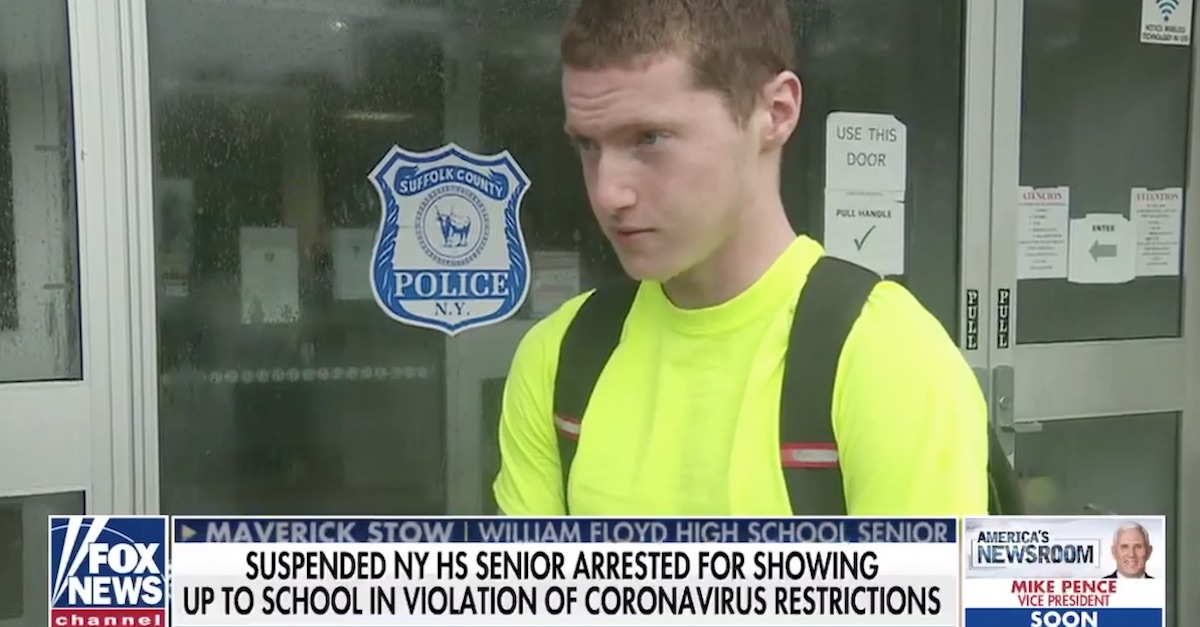 It appears we have reached the “get arrested at school to own the libs” stage of the coronavirus pandemic.

Maverick Stow, a 17-year-old high school senior, first showed up at school on Long Island for in-person class on Tuesday despite the fact that there was no such thing available to him given the quirks of sometimes remote and sometimes in-person scheduling—as dictated by the Empire State, where COVID-19 hit hardest. Tuesday was a remote school day, but Stow went to school at William Floyd High School in Mastic, New York anyway.

This led to a five-day suspension, but Stow was undeterred. He went back to school on Wednesday and the William Floyd School District threatened Suffolk County Police involvement. The district claimed that Stow “at one point squar[ed] up to a district official and stating that the district would have to ‘forcibly remove’ him from school grounds.”

According to Patch, a trespass notice warning was sent to Stow’s parents, warning that if their son showed up again on school grounds he would be prosecuted.

“Your child is hereby warned that on the next occasion he is found illegally on any William Floyd School District property, the police will be notified and he will be prosecuted for third degree criminal trespass,” that notice said.

Stow once again made an appearance on school grounds on Thursday, resulting in the arrest that was promised and prompting the district to call him “irresponsible and selfish.”

“Mr. Stow continues to display irresponsible and selfish behavior with today’s latest publicity stunt,” the district said. “He arrived wearing a neon green shirt – for high visibility – with a contingent of media just outside the fence line trying to capture him getting arrested as he entered the building. He entered the building and was immediately arrested by the Suffolk County Police Department without incident and transported to the police station.”

“However, we must follow the social distancing requirements set forth by the state; and, when it is deemed safe to do so by our government and health officials, we will gladly welcome all of our 8,800 students back,” Montalto said. “It is important for Maverick and his family to understand that we do not set state policy, enact laws or write executive orders, but we do abide by them. We cannot have students showing up to school on their non-scheduled in-person days and when requested to leave displaying insubordinate behavior to multiple school officials and refusing to follow their instructions.”

Stow reacted to his arrest during an interview with Fox News from outside of the police station.

“I feel that I was arrested for going to school. That’s all I ever actually did,” he said. “I just went to school. And I just walked out of the 7th Precinct because of wanting to go to school.”

Stow was charged with third-degree criminal trespass, a misdemeanor. A court date has been set for Sept. 24.

Stow’s dad Richard Stow supported his son, calling him a “very smart kid” who “knows what he’s doing.” According to Fox News, Maverick’s mother Nora Stow “supports her son 1,000-percent,” saying they “knew this was going to happen” and that they were “ready for it.”

She said her son was doing this for all students who want full-time, in-person classes now. She anticipated that her son would “picket” the school next week.