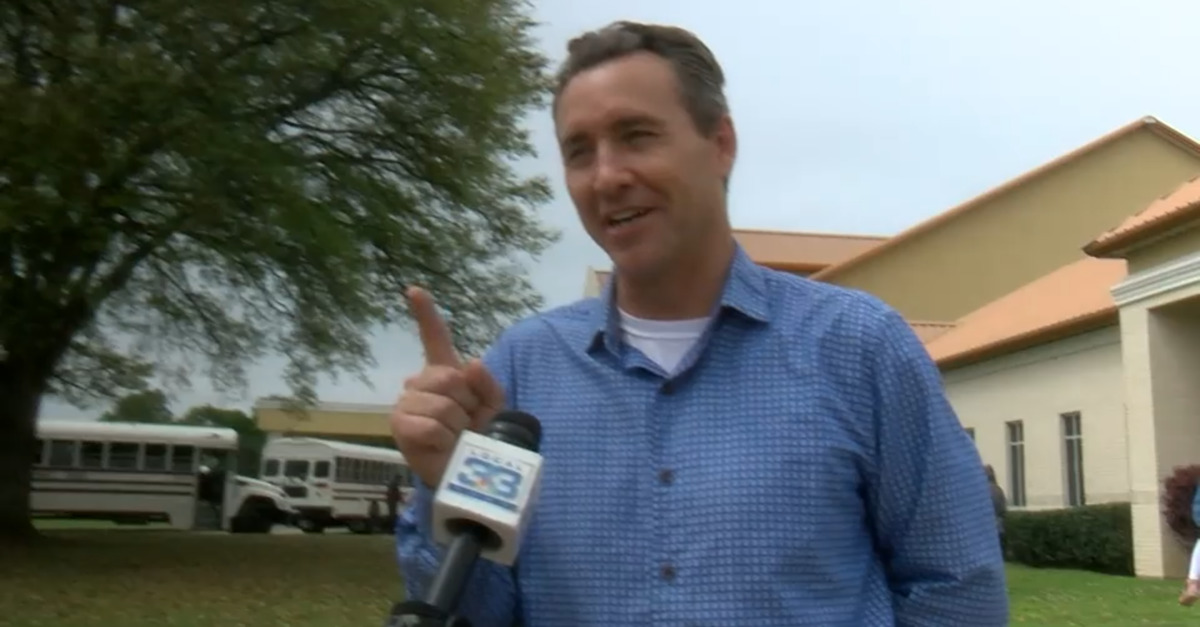 The governor of Louisiana, concerned about the novel coronavirus pandemic in early March, relied on the authority of long-existing state law to issue an executive order which banned large gatherings. But Tony Spell didn’t listen. His orders came from a higher authority.

Spell has defiantly been hosting religious ceremonies in the Baton Rouge area at his Life Tabernacle Church.

Last last week, the Apostolic denominated flock played host to some 1,800 parishioners — well in excess of the large gatherings ban. Masks and gloves were reportedly few and far between. Spell, for his part, said he and his flock had God on their side.

“That is our command. ‘They shall lay hands on the sick and they shall recover,'” Spell told local Fox affiliate WGMB. “When the paramedics can’t get there, when the law enforcement can’t get there, the Holy Ghost can get there it will make a difference in someone’s life.”

The pastor also expressly dismissed concerns about the need for medicine if anyone in his congregation takes ill with COVID-19. “I’m going to address that by laying hands on them and praying for them and depending on God to heal their body,” he said, social distancing be damned.

Central Police Department Chief Roger Corcoran had man’s laws on his side. Corcoran slammed Spell as little more than a reckless self-promoter:

Over the last two weeks I have worked with the sheriff, state police, the state fire marshal, Reverend Tony Perkins, and others to address this matter outside of legal action. Mr. Spell made his intentions to continue to violate the law clear. Instead of showing the strength and resilience of our community during this difficult time, Mr. Spell has chosen to embarrass us for his own self-promotion.

“Mr. Spell will have his day in court where he will be held responsible for his reckless and irresponsible decisions that endangered the health of his congregation and our community,” Corcoran continued. “This is not an issue over religious liberty, and it’s not about politics. We are facing a public health crisis and expect our community’s leaders to set a positive example and follow the law.”

Under the law in question, if an “emergency [is] declared by the governor . . . any person or representative of any firm, partnership, or corporation violating any order, rule, or regulation promulgated [by the governor] shall be fined not more than five hundred dollars or confined in the parish jail for not more than six months, or both.”

Louisiana law enforcement presaged the harsh clampdown on the state’s would-be scofflaws in a joint statement issued earlier this month.

“Louisiana State Law (RS 29:724) gives the Governor authority to set restrictions on gatherings and businesses in the interest of public safety and to prevent spread of COVID-19. These proclamations and declarations have the power of law,” the statement notes. “As such, local, parish, and state law enforcement agencies as well as other state authorities including [Alcohol and Tobacco Control] and the State Fire Marshal, will be acting to enforce these rules set by the Governor.”

“I’m a person of faith,” Gov. Edwards said during a press conference after the charges were filed against Spell. “I happen to believe very much in the awesome power of prayer. I also believe in science, and the scientists at the CDC say that the measures we are taking will minimize the spread.”

Spell apparently doesn’t have any plans of complying with the governor’s order–“Because the Lord told us to” ignore it, he said.

“We’re still here and still assembling and having church,” he said Tuesday.