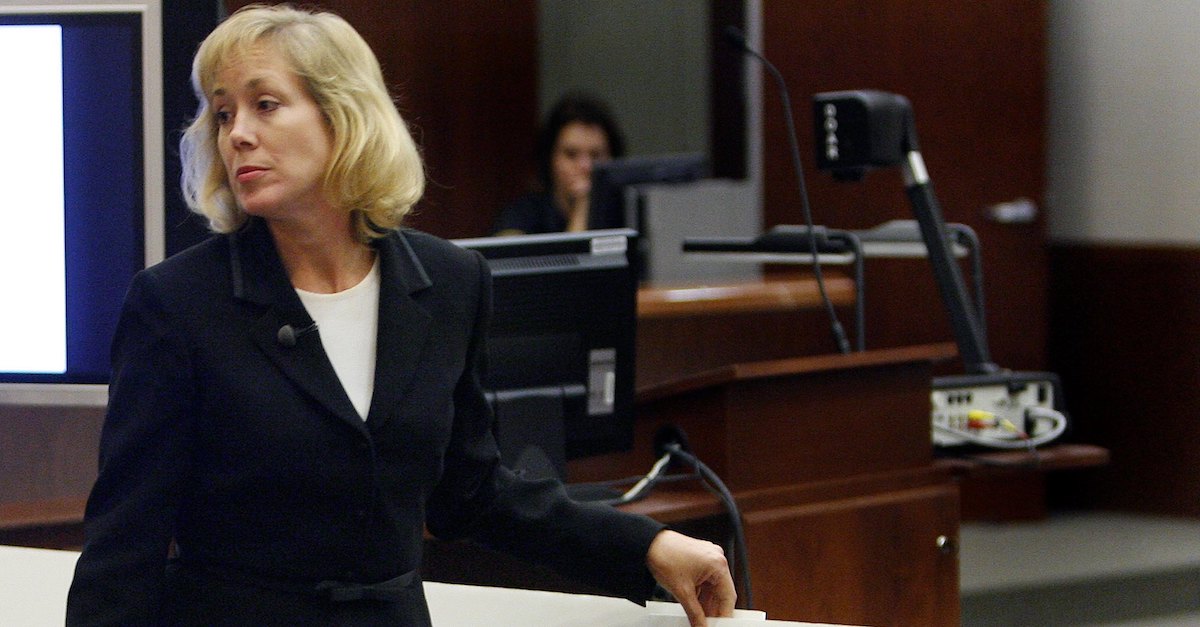 One of the top prosecutors in Houston is being heavily criticized after sharing a post on Facebook equating Black Lives Matter protesters with Nazi jewelry plunderers during the Shoah.

The caption above the photo reads: “Wedding bands that were removed from Holocaust victims prior to being executed, 1945. Each ring represents a destroyed family. Never forget, Nazis tore down statues. Banned free speech. Blamed economic hardships on one group of people. Instituted gun control. Sound familiar?”

Williford is one of the leading attorneys with the DA’s office and has previously prosecuted death penalty cases. She also somewhat famously cross-examined Patti LaBelle when the singer’s bodyguard was on trial for assault in 2013.

“Hey, fellow Harris County attorneys,” he wrote. “Here’s a screenshot of the HCDAO’s Trial Bureau Chief being racist as fuck (and publicly embarrassing themselves while also letting everyone know they’re a huge piece of shit). This person thinks protestors and BLM and people that want to tear down Confederate-loser-statues are the same as Nazis. Y’all know what to do.”

“Thank you to the brave soldier that sent it to me,” Beltramini’s post continued. “I can’t stress this enough: ALWAYS SCREENSHOT SKETCHY SHIT!! This person will be out of a job by the end of the day. If she was trying to help Captain Bone-spurs get reelected, adding to the unemployment numbers isn’t going to help….#DAKimOgg.”

Attorney Nick Poehl, who also focuses on criminal defense, brought attention to the controversial post via Facebook as well–questioning Williford’s record viz. black defendants who went up against the Harris County District Attorney’s Office in the past.

“If you’re wondering who Kaylynn Williford is, she’s a Harris County Assistant District Attorney,” he noted, “in other words, a prosecutor. In this post, she’s comparing removing statues of Confederate traitors to Naziism.I’m going to go out on a limb and say she’s not going to be in that job much longer, but I’m wondering how black defendants have been treated by her now?”

Tom Berg is one of Ogg’s former assistants. He recently left the district attorney’s office. In comments to the Houston Chronicle, he expressed confusion over the Williford’s post.

“Why Kaylynn would share that propaganda I have no idea,” Berg told the outlet. “There are all kinds of cloudy thinking and bad judgment emanating from the DA Office these days.”

“I would not have tolerated this, but I have been gone a year,” he continued. “Given the DA’s efforts to court portions of the black community in an election year, this strikes me as bizarre.”

Several additional posts on various social media websites have juxtaposed Williford’s power with the allegedly racist and antisemitic Facebook post–many of them calling attention to the majority nonwhite character of Houston itself.

“It’s a strikingly bad choice given the circumstances right now,” Beltramini added, in comments to the Chronicle. “This is a high-powered person who has the power to control a lot of cases, what cases can be dismissed and a lot of policy for the trial attorneys, probably for hundreds in the entire office.