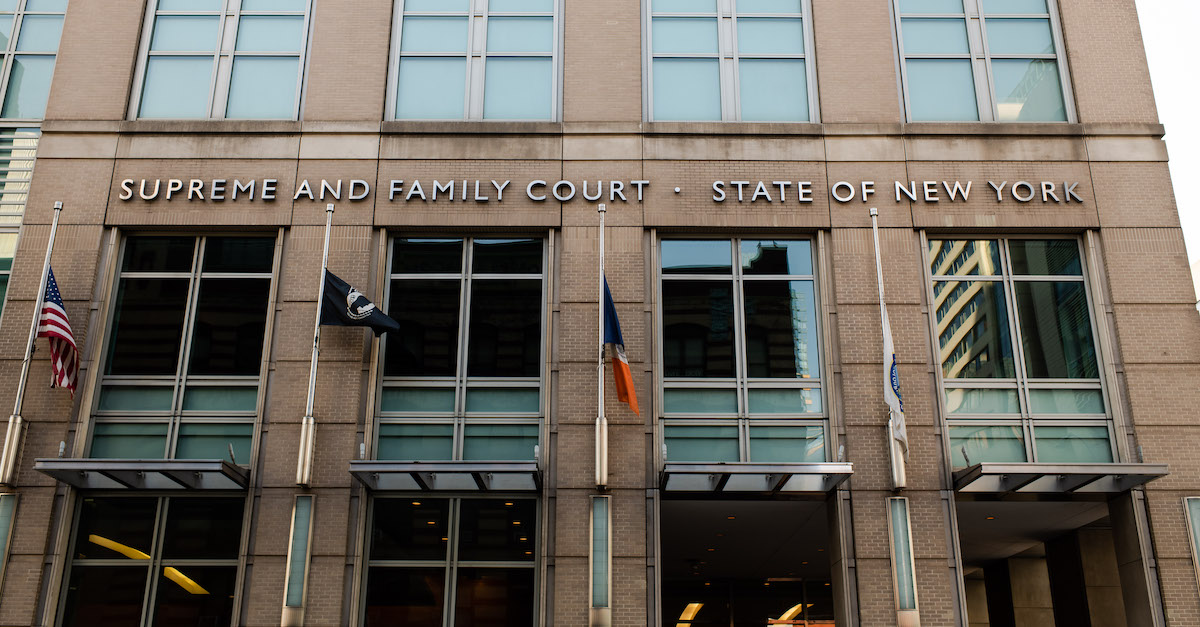 The exterior of the Kings County Supreme Court building is seen in a July 29, 2020 file photo.

A New York State Supreme Court judge on Thursday dismissed an entire lawsuit because a 68-year-old attorney who recently had surgery said he could not wear a face mask without struggling to breathe or becoming too exhausted to do his job. The attorney requested to use a face shield while speaking to socially distanced jurors spread across a large Brooklyn courtroom; the judge refused to allow him to do so.

A terse one-page order shut down the client’s underling personal injury case; it is written in Judge Lawrence Knipel’s own hand: 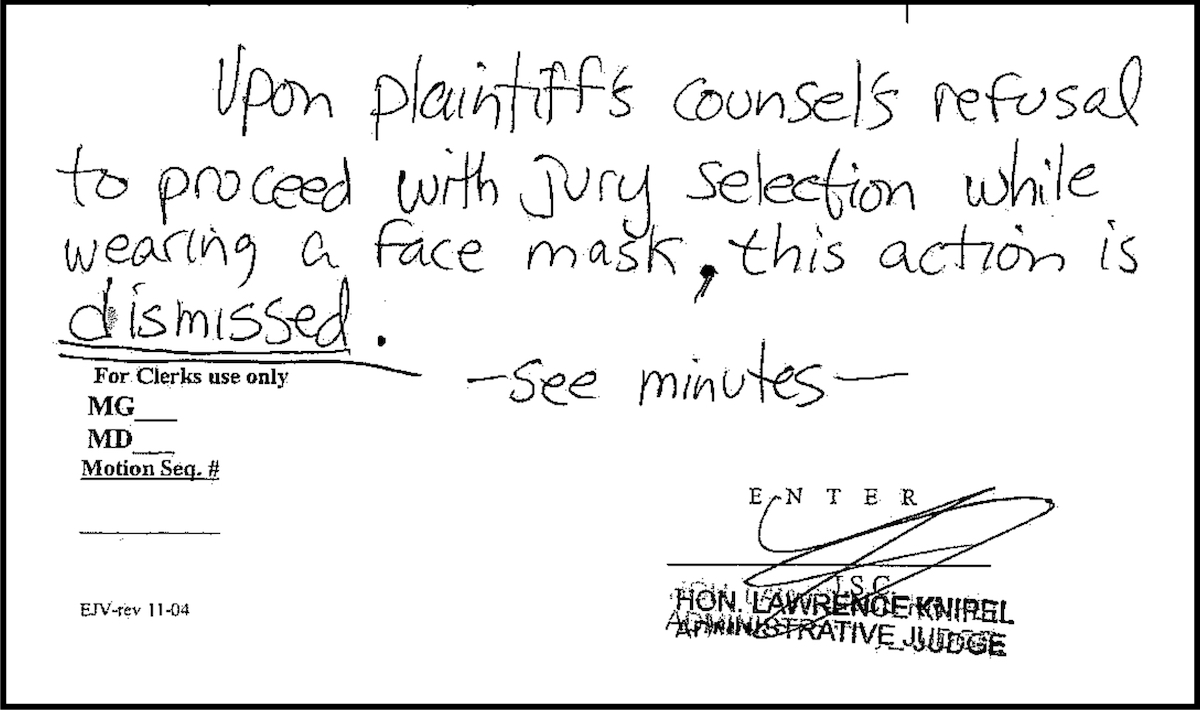 “Upon plaintiff’s counsel’s refusal to proceed with jury selection while wearing a face mask, this action is dismissed,” the order reads.

Attorney Howard Greenwald told the judge that he had been contacted “in the last ten days with reference to the opening up of the courthouse” and that he “needed to come in and pick a jury.”

“I came in. I had on a shield. I began with the shield,” Greenwald said. “I was told that I could not pick a jury unless I had the mask on. I complied with that. I attempted to do this for a couple of minutes. I had particular difficulty. Just talking to your Honor right now with the mask, my nose fills. I can’t breathe.”

He argued that jury selection occurred in a large room with proper social distancing measures in place. As such, he had to “project” his voice some 70 or 80 feet to reach jurors seated “in the back of the room.”

“I had to sit down after two minutes,” Greenwald said. He also said he struggled to respond to points made by his opposing counsel because he could not catch his breath and therefore “could not object.”

“I couldn’t say anything because I was trying to catch my breath from being on my feet and talking,” he continued.

“We came back in the afternoon to begin the jury selection and at that point I knew I could not do it with the mask on. I put the shield on. A court officer after a few minutes came over to me and said either you wear the mask or you have to leave the building. And I said, I cannot speak here, and I made the application . . . to use the shield. It wasn’t that I was bare faced. Just to use the shield. And I was told in no uncertain terms that if I was going to be here in the building I have to have a mask on.”

Greenwald said he was “not physically able to comply with the rule to do [his] job as a lawyer.”

He added that he has been practicing law for 42 years and had tried more than one hundred cases before a jury. He said he had no “reticence to go ahead and pick a jury” but that he was “not physically capable of doing it under these circumstances.” He requested to adjourn jury selection until June.

The opposing attorney, Evan B. Feuerstein, said he personally had been ill with COVID-19 and understood “the issues with the problems of breathing.” He said he had known Greenwald “a long time” and “wouldn’t” make a fuss by “trying to impugn or to question” him.

“If Mr. Greenwald has a medical issue, you know, there is nothing I can do to refute that. You know, I am certainly a human being and I can understand if he is uncomfortable and can’t do it,” Feuerstein told the judge. But he also said he was ready to proceed with his case.

“First of all, Covid is a health emergency disaster unseen in our lifetime,” the judge said. “Well over half a million people died in the United States. Court have been greatly restricted in moving forward for the better part of a year or over a year, even. Now we are starting up again with jury trials.”

The judge quibbled with Greenwald’s claim that he had little notice that the case would be called to proceed. He circled back to the issue involving the mask.

“There is no question that the number one safety measure seems to be wearing masks. Our Court protocols from Buffalo to Riverhead right across the state, masks. Masks must be worn in all courtrooms. I tried to accommodate you, counsel.”

The judge recapped judicial scheduling issues which which plagued the case and said he could accommodate Greenwald by providing a smaller courtroom. He then said Greenwald waited too long to complain about wearing a mask. Next, he cautioned Greenwald that he would “dismiss the case” if Greenwald refused to go forward.

“The problem is, your Honor, I just can’t do this. I am tired, your Honor,” Greenwald said.

He then told the judge he was 68 years old and had undergone surgery earlier in the month.

“I cannot do this physically. I can’t breathe, your Honor. What I am thinking about now is not what I am going to say, your Honor. I am thinking about taking my next breath. I cannot do it and if you are going to force me to say I can’t proceed and you give me a dismissal, then I am going to have to accept that, your Honor, because physically I am unable to proceed. I can’t proceed and I have this plexiglass all around me. I am able to proceed with a plexiglass shield, which I have in my bag.”

The judge was unmoved.

“Well, it is beyond my authority,” the judge said. “These are state-wide protocols about wearing masks in court. Many many millions, tens of millions of people, maybe hundreds of millions of people do proceed with masks. You seem to be, for all appearances, and I don’t know what is going on internally in you, but for all appearances to the world you seem to be proceeding just fine. You seem rather eloquent.”

The judge then gave Greenwald the option of allowing another lawyer at his firm try the case.

Greenwald said that could not happen.

“Your Honor, look at me,” Greenwald implored.  “Look at me.”

“I am dripping wet here, your Honor,” Greenwald said.

“Okay. It hurts me to do it, but case dismissed,” the judge said. “I will give you an order shortly.”

The underlying lawsuit, Gedell v. Vaknin, accused both an individual and a corporate defendant of negligently causing a car crash which resulted in a “severely injured” plaintiff. The plaintiff was “bruised and wounded” and “suffered, still suffers and will continue to suffer for some time physical pain and bodily injuries,” a complaint document indicates. The plaintiff “became sick, sore, lame and disabled and so remained for a considerable length of time,” it concluded.

Other statements by the defense suggested the plaintiff suffered from a hairline fracture.

Read the dismissal and the original complaint below: