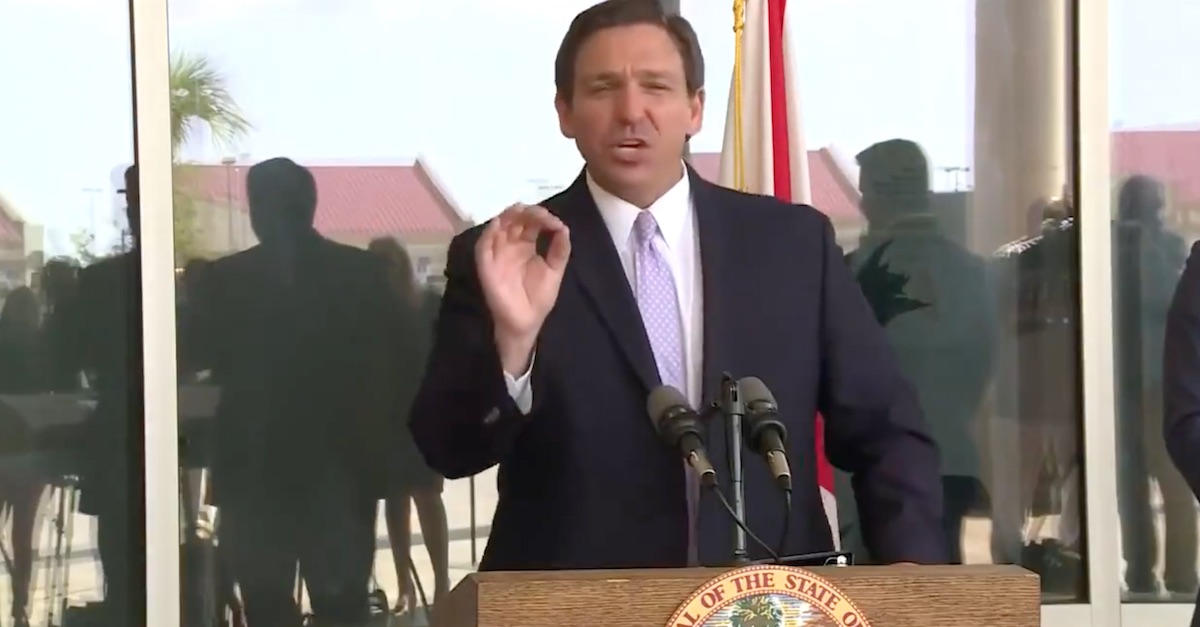 Florida’s Republican Gov. Ron DeSantis (R) on Thursday filed a lawsuit against several federal government agencies and officials in what is likely a longshot bid to get the luxury cruise industry back up and running in his state.

The complaint, filed against the Centers for Disease Control and Prevention (CDC) and the Department of Health and Human Services (HHS) in the U.S. District Court for the Middle District of Florida, accuses the government of needlessly sabotaging cruise lines while other industries, such as airlines, theme parks, and restaurants have been permitted to return to a relative form of regulated normalcy.

“But as these industries begin to restart and rebuild, the cruise industry has been singled out, and unlike the rest of America, prevented from reopening,” the suit stated. “Despite the demonstrated success of reasonable COVID-19 safety protocols in Europe and Asia, the cruise industry in the United States has been subject to a nationwide lockdown since March 2020. As a result, the industry is on the brink of financial ruin.”

The DeSantis lawsuit comes as the governor looks to ban vaccine passports. At least one cruise line has specifically said that part of its plan to get up and running is to “operate with fully vaccinated guests and crew.”

The cruise industry has been shut down since former President Donald Trump announced a halt to outbound sailing from the United States. The CDC has kept those restrictions in place for more than a year, saying the environment aboard the vessels is ideal for transmitting the virus and further precaution protocol testing is needed.

“Current scientific evidence suggest that, absent mitigation measures of the type needed to prevent further transmission, cruise ships would continue to pose a greater risk of COVID-19 transmission than other settings,” the CDC wrote in a paper late last year. “Absent appropriate interventions to mitigate the spread of COVID-19, cruise ship conditions would likely amplify the spread of an already highly transmissible disease.”

While the CDC has said it believes passengers can start returning to cruise liners in July, industry leaders have insisted they’re already prepared to reopen safely.

The decision to keep the massive ships docked has hit Florida particularly hard, as the state maintains three of the busiest cruise ports in the world: Miami, Port Canaveral, located near the Kennedy Space Center, and Port Everglades, which is just outside of Fort Lauderdale.

In the lawsuit, DeSantis argues that the CDC doesn’t have the authority to shutter cruises until July and asserts that there is no rational reason to continue the pause in service.

“The CDC does not have the authority to issue year-and-a-half-long nationwide lockdowns of entire industries,” the suit stated. “And even if it did, its actions here are arbitrary and capricious and otherwise violate the Administrative Procedure Act (APA).”

Unfortunately for the governor, the federal government maintains broad legal authority over U.S. ports, meaning that getting the relief sought will be an extremely steep uphill battle.

Larry Gostin, professor of global health law at Georgetown University and director of the World Health Organization’s center on global health law, told the Miami Herald on Thursday that the suit has a “negligible viability approaching zero.”

“Under no circumstance could I see a judge striking down a regulation that applies to cruise ships and the safety of its passengers because its passengers are going to be introducing infectious diseases back into the U.S. if they get infected on the ship. The U.S. has a very strong interest and power to stop that,” he said.

See below for the filed complaint:

Fla+v+HHS+and+CDC+Complaint by Law&Crime on Scribd