Arkansas Judge Blocks Statewide Ban on Mask Mandates: The Law ‘Cannot Be Enforced in Any Shape, Fashion or Form’ 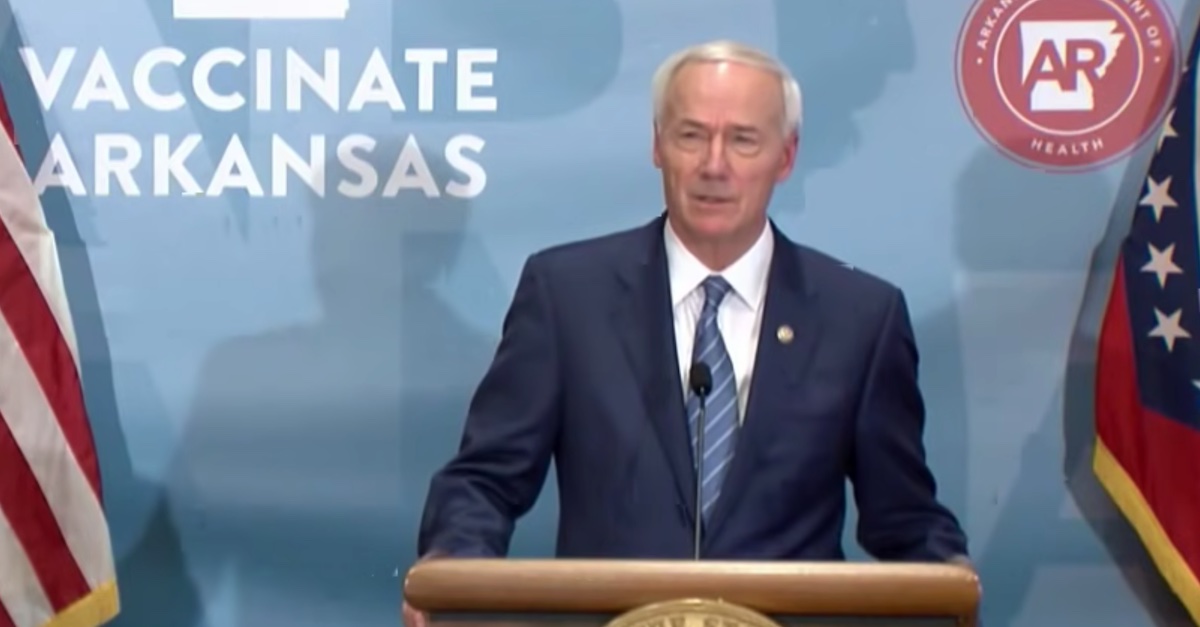 Arkansas Gov. Asa Hutchinson speaks at an August 5, 2021 press conference where he expressed regret for signing a statewide ban on certain mask mandates given the surging delta variant of the novel coronavirus.

The Little Rock School District and the Marion School District are the original plaintiffs. The named defendants are Gov. Asa Hutchinson (R) — who is sued in his official capacity — and the State of Arkansas itself.

“This case presents the question of whether there exists a rational basis for exposing public school students in Little Rock and Marion and throughout Arkansas to the very real threat of serious illness and death,” the lawsuit’s opening salvo bluntly states.  “No rational reason exists for denying public school students, teachers and staff, and the school boards which are obligated to keep them safe, the ability to ensure that all who work and learn in our public schools are as safe as possible.”

The lawsuit cites a worsening COVID-19 pandemic in Arkansas as the reason individuals schools, teachers, and school boards should be able to mandate masks. A motion for a preliminary injunction, which followed the filing of the lawsuit by just a few hours, was similarly harsh:

As set out in their Complaint, Plaintiffs LRSD and MSD are responsible for the safety of their students, teachers and staffs. They are facing the threat of an alarming increase in the number of delta variant Covid-19 cases, especially among school age children. Act 1002 of 2021 deprives Plaintiffs of a simple and effective means of mitigating that threat and protecting their students, teachers, staffs and their families from an unnecessarily increased risk of sickness or death.

Then came the accusations that the ban on mask mandates violates the state constitution:

LRSD and MSD are likely to succeed on the merits. Act 1002 violates the Education Article of the Arkansas Constitution, Article 14, § 1, which requires that “the State shall ever maintain a general, suitable and efficient system of free public schools and shall adopt all suitable means to secure to the people the advantages and opportunities of education.” A suitable and efficient system of public education would not require students to risk their health and their lives to get the education promised to them in the Arkansas Constitution, especially when the State is required to “adopt all suitable means” to provide them “the advantages and opportunities of education”.

On the effective date of this act, all mandatory face covering requirements, including without limitation requirements imposed by executive order of the Governor and the Department of Health under directives issues under § 20-7-109 or § 20-7-110, or both, shall end.

The General Assembly reserves the right to enact legislation regarding the mandatory use of face masks, face shields, or other face coverings.

A state agency or entity, a political subdivision of the state, or local official shall not mandate an individual in this state to mask, face shield, or other face covering.

The use of a face mask, face shield, or other face covering shall not be a condition for entry, education, or services.

The Act does not apply to private businesses, state health care facilities, or jails.

Pulaski County Circuit Judge Tim Fox on Friday issued a preliminary injunction against the Act, according to the Associated Press. The issuance of the injunction was not yet noted on the case docket as it was reviewed by Law&Crime.

The AP said Fox ruled that the Act “discriminated between public and private schools.” He ruled that the law “cannot be enforced in any shape, fashion or form” pending further court action.

Gov. Hutchinson, a Republican, recently said that he regretted signing the Act, but he also noted that the Republican-controlled legislature — backed by constituents angry over mask mandates — easily had the power to override his hypothetical veto. He added that he wished a legislative remedy could be reached.

The lawsuit which led to the preliminary injunction is rife with data about the toll the novel coronavirus has taken on Arkansas, where 37% of the population is currently fully vaccinated. That vaccination rate places Arkansas as tied for the fourth lowest state in terms of vaccination by percentage of population. Alabama, Mississippi, and Wyoming have lower vaccination rates; Louisiana is a tie.

The Marion School District recounted its tales of woe given its inability to enforce mask mandates:

Because MSD cannot mandate that its students, faculty, and staff where masks, the number of individuals who must quarantine is exponentially greater than it has to be. If MSD could issue its own policy requiring students and employees to wear masks, it could more effectively prevent transmission of an exposure to Covid-19 and its variants and avoid the necessity of a school closure.

An affidavit provided by Dr. Glen Fenter, the superintendent of the Marion School District, said that incentives, including gift certificates, groceries, and even big-screen televisions, did not entice many local citizens to take the vaccine. Only one out of every three students in the district has acceptable home internet service, making remote learning difficult; even then, “very few” students who did “participate in the virtual education option last year achieved an acceptable level of academic progress,” the affidavit said.

The superintendent said that his district was forced to “quarantine over 500 students and employees” based on CDC and state health department guidance after the second week of school. The school year in Marion began July 27, 2021.

Elsewhere, the lawsuit notes that the Little Rock School District — where school is scheduled to start in ten days, on Aug. 16th — faces a dilemma:

Arkansas has compulsory school attendance laws which require students to attend
school. Ark. Code Ann. § 6-18-201. This includes, of course, students under the age of twelve for whom no Covid-19 vaccine is currently available.

The broader lawsuit argues that the Act violates an education clause of the state constitution, the equal protection clause of the state constitution, and that certain federal laws preempt the state from enforcing the Act. It also argues that the Act violates separation of powers principles, conflicts with a subsequent state law, and violates the premise of Jacobson v. Commonwealth of Mass., the 1905 U.S. Supreme court case which allowed mandatory vaccination policies — and penalties for those who refused to comply — to stand.

A request for comment from the office of Gov. Hutchinson was not returned by press time.