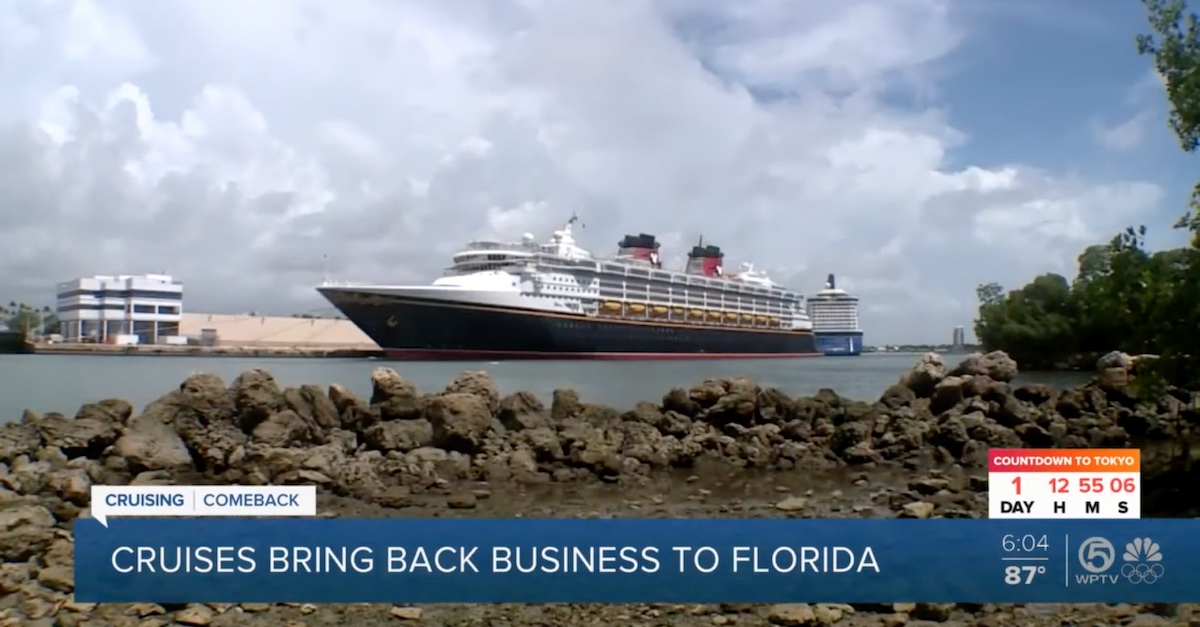 The U.S. Court of Appeals for the Eleventh Circuit just changed its mind and sided with Florida in ongoing drama over cruise ships sailing out of ports in the Sunshine State. The about-face at the circuit court level was almost certainly brought on by Florida’s recent petition to the United States Supreme Court, asking the justices to rule against the CDC’s ongoing “no-sail order.”

The battle between Florida’s Republican Gov. Ron DeSantis and the CDC has been going on for some time now. In April 2021, DeSantis filed a lawsuit challenging the CDC’s open-ended prohibition against cruising; he hoped the move would get the cruise industry back up and running in his state. Florida’s complaint named the CDC and the Department of Health and Human Services (HHS) as defendants. It alleged that they targeted the cruise industry for a superfluous shutdown while leaving other leisure and industries running. It also alleged that the CDC’s legal authority was confined to things like inspections and quarantines and that shutting down an entire industry was far outside the agency’s legal authority.

In a 124-page ruling in June, U.S. District Judge Steven Merryday sided with DeSantis, holding the CDC’s “conditional sail order” exceeded the CDC’s authority.  The court’s order was stayed 30 days, until July 18. After that date, the CDC’s strict rules were to become non-binding recommendations for cruise companies, just as they are for other industries. The CDC appealed the ruling and asked the district court to stay its decision during while the appeal was fought. The district court refused, but a panel of judges on the Eleventh Circuit ruled 2-1 to stay the district court’s order pending the CDC’s full appeal — a big win for the CDC.

Florida responded to the CDC’s win in the Eleventh Circuit by filing an emergency petition with the United States Supreme Court. Florida’s arguments must have been pretty convincing, because the Eleventh Circuit sua sponte reversed the very order Florida appealed to SCOTUS.

The three judge panel of the Eleventh Circuit included Judges Jill Pryor (a Barack Obama appointee), Charles R. Wilson (a Bill Clinton appointee), and Elizabeth L. Branch (a Donald Trump appointee). Although the panel offered no comment or explanation for its about-face, the judges may have realized that SCOTUS was likely to side with Florida on the matter.

In its emergency petition presented before U.S. Supreme Court Justice Clarence Thomas (the justice assigned to the Eleventh Circuit), Florida argued that “the Conditional Sailing Order regulates on an industry-wide, systemic basis, in a manner wholly untethered to any indication that a particular cruise ship may pose a risk of infection.” Calling the CDC’s no-sail order a “breathtaking assertion of authority,” Florida argues that the CDC lacks “authority to refashion an entire industry’s business model simply because, in the CDC’s ‘judgment,’ doing so is ‘necessary’ to prevent disease.”

Florida reminded the SCOTUS justice that cruise ships aren’t the only things the high court has considered in recent days. Specifically, Florida noted that Justice Brett Kavanaugh only agreed to vacate a stay in another case (one invalidating the CDC’s nationwide eviction moratorium) because the moratorium was slated to expire in just a few weeks. By contrast, argues Florida, “there is no indication that the CDC will lift the requirements of the Order before at least November 2021.”

Florida also argued that the cruise industry can be properly motivated by free-market forces to adopt safe COVID-19 protocols. From the brief:

The Eleventh Circuit’s Friday afternoon shifts things into the CDC’s court; the agency can certainly raise an appeal to the Supreme Court on its own behalf. Whether the CDC will pursue the short-term appeal remains to be seen, as the timing of the circuit court’s change of heart suggests the judges may have been swayed by the looming potential of Supreme Court reversal.

This reversal came after FL just petitioned #SCOTUS to reinstate the ban on the CDC rules.