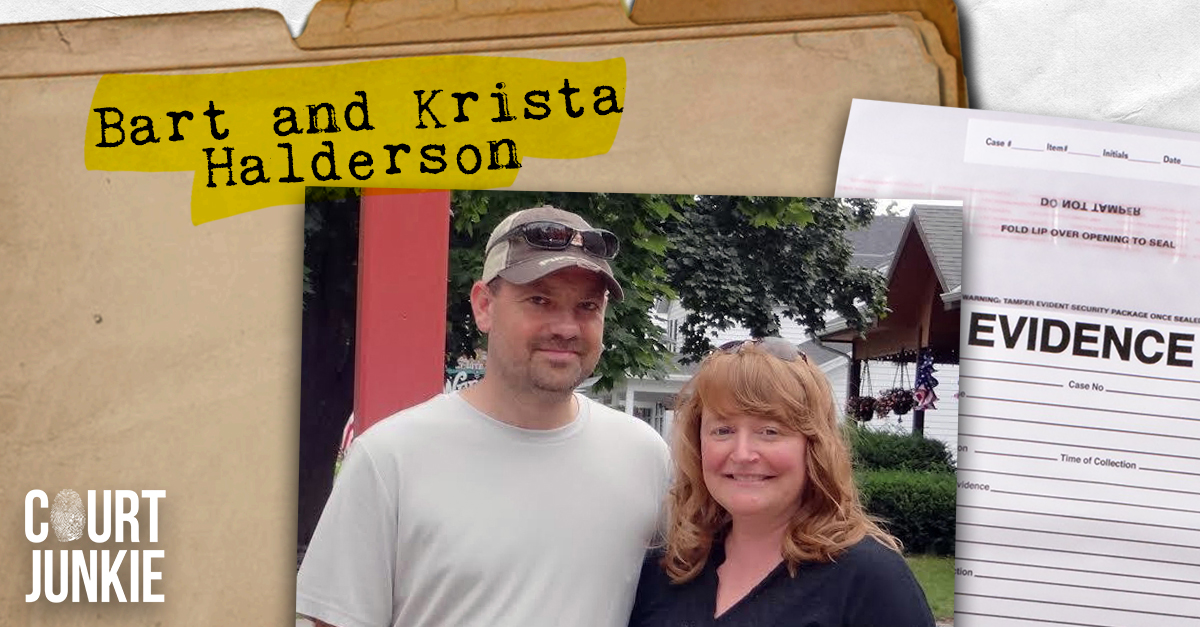 Listen to the full episode of Court Junkie on Apple Podcast, Spotify or wherever else you get your podcasts, and subscribe!

Bart and Krista Halderson were reported missing on July 7th, 2021. They had last been seen by their son Chandler as the couple was preparing to head to their remote cabin in Sawyer Lake, Wisconsin, for the Fourth of July weekend.

They would never return home.

The couple’s older son Mitchell would grow more concerned for their parents as each day passed. So did younger son Chandler, it seemed.

Mitchell lived in nearby Madison, Wisconsin, and worked a good job as a tech rep.

Chandler appeared to have a bright future ahead. He told people he was preparing to graduate college with a Renewable Resource Engineering degree and then heading to Florida to work for Elon Musk’s company SpaceX. He said that in his free time, he volunteered as a scuba diver with the local Madison Police diving squad.

Their parents’ disappearance brought their lives to an abrupt halt.

Chandler told police that they took off early one morning to the cabin, catching a ride with another couple he couldn’t identify. They had plans to repair parts of the cabin that had been damaged during a recent storm and intended to return home the following Monday or Tuesday.

Chandler vowed to help the police in any way.

He wanted his parents home.

Police even spoke with Chandler’s girlfriend, Cathryn, and her family on their farm, to eliminate suspects and continue the vital search for the missing Haldersons.

Cal, the girlfriend of Cathryn’s mom, told an odd story to police that made them question everything they had been told.

Chandler had visited the property by himself several days prior. He had been acting strange and asked to use the family pool for a few hours.

When Cal returned later to check on Chandler, he wasn’t in the pool and the cover was still latched shut. Instead, he appeared, walking out of the forest line behind a nearby shed.

She added one more detail to her police statement before the interview wrapped.

She noted that vultures had been circling the woods on her property in the last few days. That was something, she said, that was completely out of the ordinary.

The persona Chandler Halderson portrayed would soon fall to pieces.

There would be no college graduation in his future because he had stopped attending classes months before.

There was no job with SpaceX, and Madison Police had never heard of Chandler volunteering as a scuba diver. The Halderson’s beloved son quickly turned into a stranger to his friends and family.

Police zeroed in on Chandler as the main suspect in his parents disappearance and what they discover in the woods on his girlfriend’s farm lead police to piece together one of the most gruesome crime scenes in the town’s history.

Listen to the full story, available now, on Court Junkie.