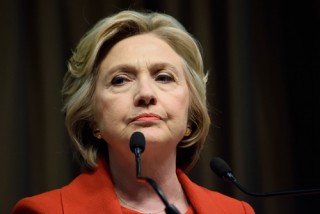 It’s a running joke among journalists that if you file a FOIA (Freedom of Information Act) request for information from the feds, you might be dead before you get your records back. My fastest return was about 13 months from the Transportation Security Administration.  I’m still waiting for some records from a request I filed in 2014 with the Centers for Disease Control and Prevention about the ebola outbreak. But a recent FOIA request by the International Business Times might win in terms of demonstrating the absolute morass of the FOIA process.  David Sirota, senior editor for investigations, filed a request for Clinton’s State Department correspondence regarding the Trans-Pacific Partnership. He made the request back in July 2015. At first, he got a response that the Clinton emails would be ready April 2016.  That’s not bad — less than a year.

That month came and went, no emails. So he followed up, and Sirota recently got an email back from the State Department saying emails would be ready … but not until after the November election. As if that’s not outrageous enough —  we happened to notice while taking a closer look at his response — that the day they promised to return the emails literally doesn’t exist.  There is no such date.

Charlotte W. Duckett, from the U.S. Department of State, replied to Mr. Sirota that his “new estimated completion date for you request is November 31, 2016.” To be clear, November has 30 days (30 days has September, April, June and November.)  That day doesn’t exist. Needless to say, it is not clear when Sirota will get his request back. And, of course, presumptive Republican presidential nominee Donald Trump has already weighed in on this one.

“Hillary Clinton’s TPP emails should absolutely be released, as her support for TPP threatens to permanently undermine U.S. workers and sovereignty,” Stephen Miller, a policy advisor for Trump, said in a statement to IBT.