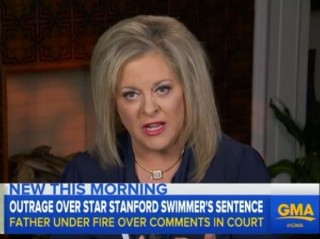 The case of Brock Turner, the Stanford University swimmer who was convicted of sexually assaulting an unconscious, intoxicated young woman outside a fraternity house has drawn a great deal of attention and anger, particularly for what is being viewed as a light sentence. While Turner was convicted of felony sexual assault, Judge Aaron Persky only gave him six months in county jail. Nancy Grace went on Good Morning America Tuesday morning to discuss the sentence, and she was not happy.

Commenting on Judge Persky‘s claim that he was following the county probation department’s recommendation, Grace said, “There is no logical explanation for what he did,” calling for Judge Persky to be removed. “A jury found him guilty of three felony sex attacks,” Grace pointed out. She went on to describe how Turner was aware of the nature of his actions, based on his response to being caught in the act by two witnesses. “He jumps up and runs!” Grace said about Turner’s reaction. “He knew he had done something horribly wrong!”

Discussing the six-month jail sentence that Persky handed down to Turner, “This is the law,” Grace said. “The California Assembly said these felonies are punishable up to 10 years each,” accusing Judge Persky of ignoring the Assembly, the jury, and the woman. “He ignored her!” referring to the letter that the victim read in court that has since gone viral. “This guy’s going to probably do six months in county jail! Really? It’s absurd!” In reality, Turner may only serve three months in jail with good behavior, before being released on probation.