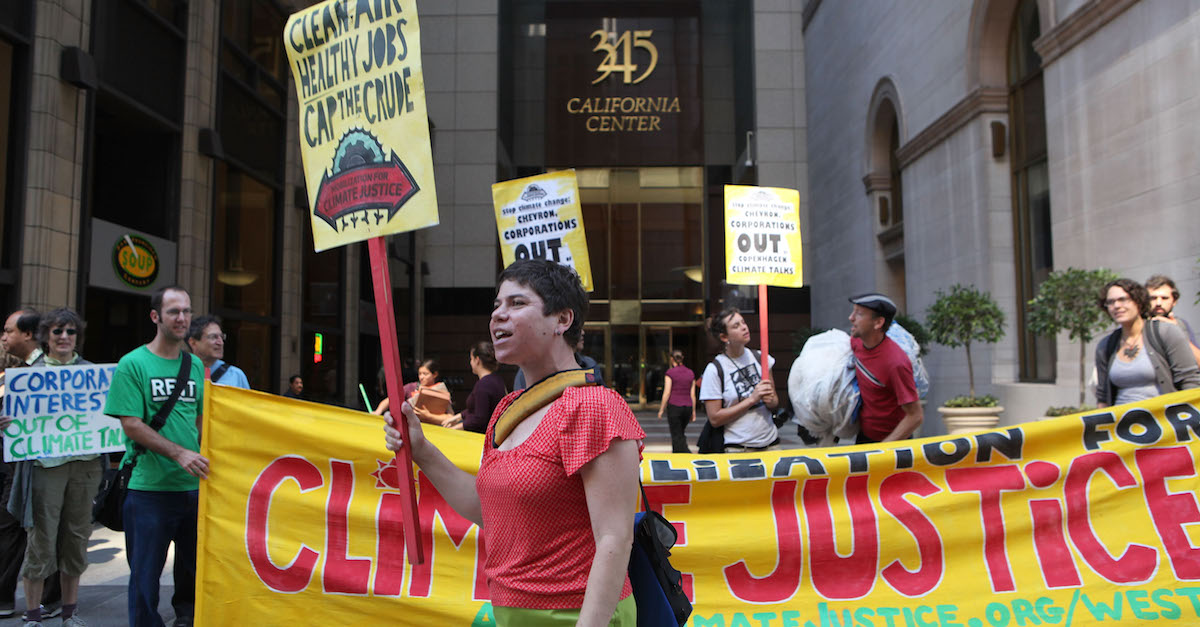 The 21 young Americans who made history and headlines with their groundbreaking climate-change lawsuit aren’t taking the Ninth Circuit’s “no” for an answer. Plaintiffs in Juliana v. United States filed a petition for rehearing en banc on Monday with the Ninth Circuit Court of Appeals. The petition is essentially an appeal of the divided 2-1 decision a panel of the Ninth Circuit handed down in January, dismissing the plaintiffs’ case.

The underlying complaint, which was brought by young plaintiffs between the ages of 12 and 23, alleges that the U.S. government is depriving them of their constitutional rights to life, liberty, and property by creating a national energy system that causes climate change.

In their petition for rehearing, they made their case as follows:

At stake before this honorable Court are the lives and liberties of 21 young Americans, fundamental rights guaranteed to them by the Constitution. The majority places at risk the ability of this Court to decide cases and controversies and uphold the system of checks and balances vital to our separation of powers. When governmental conduct catastrophically harms America’s children, the judiciary must perform its independent role and determine whether the challenged conduct, not exclusively committed to any branch by the Constitution, is unconstitutional.

The petitioners, who now must convince the full Ninth Circuit to review the case, found an ally in Circuit Judge Josephine L. Staton, who agreed with them at the first hearing that the case was appropriate for judicial redress. Staton was passionate right from the outset of her dissent, writing, “It is as if an asteroid were barreling toward Earth and the government decided to shut down our only defenses.”

“Seeking to quash this suit,” Staton continued, “the government bluntly insists that it has the absolute and unreviewable power to destroy the Nation.”

Staton bluntly criticized the two circuit judges who sided against her:

My colleagues throw up their hands, concluding that this case presents nothing fit for the Judiciary. On a fundamental point, we agree: No case can singlehandedly prevent the catastrophic effects of climate change predicted by the government and scientists. But a federal court need not manage all of the delicate foreign relations and regulatory minutiae implicated by climate change to offer real relief, and the mere fact that this suit cannot alone halt climate change does not mean that it presents no claim suitable for judicial resolution.

The Juliana plaintiffs now argue that the full Circuit Court should examine evidence or risk allowing the judiciary to abdicate its responsibility of protecting their rights. The fact that many of the plaintiffs are minors may serve to underscore their argument for judicial intervention. As their brief contends, “While these children cannot vote to secure their fundamental rights, because of the Founders’ foresight, Plaintiffs can invoke the constitutional duty of the federal judiciary to protect them from government-inflicted harm.” One of the plaintiffs, 14-year-old Avery M. said in a press release that the judges “told us we should take our issues to the political branches, but I am too young to vote so that’s not a reasonable request.”

Their brief also invokes Alexander Hamilton, by way of U.S. Supreme Court Justice Neil Gorsuch. Referencing Gorsuch’s quote in A Republic, If You Can Keep It, the petitioners wrote that “Alexander Hamilton explained ‘the job of the judge is to enforce the supreme and enduring law of the Constitution over the current will of the majority.'”

Philip Gregory, co-counsel for the youth plaintiffs, said the lawsuit raised “an issue of exceptional importance to our country.”

“According to the district court, these young Americans should have a trial. In overturning the district court, the majority fundamentally changed the way our branches of our government operate, placing the president and Congress beyond the reach of judicial oversight,” Gregory said in a statement obtained by Law&Crime. “If this opinion stands, there will be no more constitutional checks and balances on government conduct. We hope the entire Ninth Circuit recognizes that this case raises important questions of authority to address constitutional controversies when our government knowingly harms the fundamental rights of America’s children.”

“Our federal judges have both the authority and the duty to confront and resolve this case based on the evidence at trial,” he continued.

Counsel for the young plaintiffs appear hopeful for the fate of their unprecedented case.

“For the last decade, the Ninth Circuit Court of Appeals has always granted en banc review in cases where children’s rights were denied by a three-judge panel,” Julia Olson, co-counsel for the plaintiffs, added. “Given the gravity of the ongoing harm to these children, and the significant flaws in the majority’s decision made clear by the vigorous dissent, this case deserves the same careful review of the full Court.”