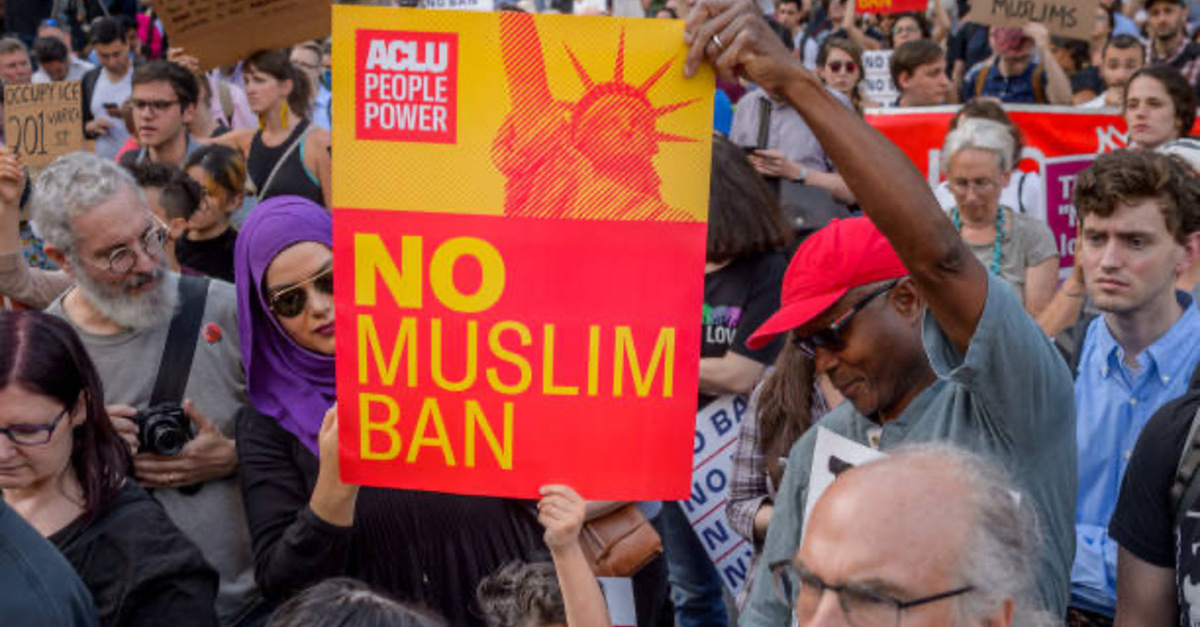 President Donald Trump announced that his administration will extend the controversial travel ban to include an additional seven countries on Tuesday. Civil rights advocates and civil libertarians slammed the announcement—condemning the proposal as a new “Muslim ban” intended to stoke Islamophobia.

The news was originally delivered by way of seemingly offhand comments to the Wall Street Journal while attending the World Economic Forum in Davos, Switzerland where the 45th president was meeting with the global elite to discuss trends in capitalism and development.

Details were initially scarce but Politico later reported the names of the next slate of proposed countries would include: Belarus, Myanmar (formerly Burma), Eritrea, Kyrgyzstan, Nigeria, Sudan and Tanzania.

Of those seven countries, only three—Kyrgyzstan, Nigeria and Sudan—are Muslim-majority.

The list, however, is said to be preliminary—that is, it could shrink or grow—and the reporting comes by way of two anonymous sources only identified as being “familiar with the matter.”

The initial travel ban was, in fact, promised by Trump himself on the campaign trail in 2016–and described by then-candidate Trump as a Muslim ban. The policy was officially announced one week after Trump took office in January 2017–via executive order–and included the Muslim-majority countries of Iran, Iraq, Libya, Somalia, Sudan, Syria, and Yemen.

Iraq was quickly removed from the list after an agreement was reached between the Iraqi government and the Trump administration. Later executive orders and presidential proclamations replaced Sudan and Iraq with Venezuela and North Korea and eventually added Chad to the list of prohibited countries.

Several court battles and nationwide injunctions tied each permutation of the ban up for months at a time. The U.S. Supreme Court, however, ultimately ruled in favor of the administration–finding that Trump’s efforts were a valid exercise of executive branch power under federal statutory authority passed via the Immigration and Nationality Act. The 5-4 decision in the case stylized as Trump v. Hawaii was decided along ideological lines and authored by Chief Justice John Roberts.

In a scathing dissent, Justice Sonia Sotomayor wrote that the majority opinion “redeploys the same dangerous logic underlying Korematsu and merely replaces one ‘gravely wrong’ decision with another,” a reference to the Supreme Court’s prior decision endorsing the racist internment of Japanese-Americans during World War II.

The third anniversary of Trump’s first executive order putting in place those controversial travel restrictions falls on this coming Monday, January 27. Various media outlets have reported that Trump has been planning to “announce a dramatic expansion of the ban on or around that date,” according to Muslim Advocates, a national civil rights organization which is focused on combating Islamophobia in the court system, Congress and local communities.

The group, which describes itself as working to “ensure American Muslims have a seat at the table with expert representation so that all Americans may live free from hate and discrimination,” immediately seized upon Trump’s Davos comments and reiterated their characterization of the soon-to-be-in-effect travel restrictions as just another iteration of the Muslim ban.

President Trump’s plan to expand the Muslim Ban is a cowardly and reckless attempt to distract the country and sow anti-Muslim hate. The Muslim Ban was wrong in 2017 and it is wrong now. Tens of thousands of American families are already hurting and separated because of this bigoted and cruel ban. Doubling down on it won’t make any of us safer but it will allow the president to continue using anti-Muslim hate as a political weapon.

“Congress must stand up to this naked and cynical bigotry by immediately passing the NO BAN Act, a historic civil rights bill that would end this ban and all religious and nationality bans,” Khera continued. “The Muslim Ban is a grave insult to our nation’s founding commitments to religious freedom and equal treatment under the law. Congress must do everything possible to end this cruelty right now.”

Asked about the latest group countries said to be included in the ban, Khera provided the following follow-up statement via email:

If these reports are accurate, this would undeniably be an effort to expand the Muslim Ban. Most of the additional countries have significant or notable Muslim populations. If the past is prologue, we expect the administration to add some non-Muslim majority countries in a transparent attempt to distract us from the fact that Muslim populations would still bear the brunt of this expanded ban and that this cruel policy is rooted in religious bigotry. The facts for almost five years are clear: President Trump is targeting Muslims and using our pain as a weapon for political gain.

Officials within the Trump administration are reportedly reticent to share details but White House spokesperson Hogan Gidley took the opportunity to defend the existing restrictions.

“The travel ban has been profoundly successful in protecting our country and raising the security baseline around the world,” Gidley said in a statement. “While there are no new announcements at this time, common sense and national security both dictate that if a country wants to fully participate in U.S. immigration programs, they should also comply with all security and counter-terrorism measures—because we do not want to import terrorism or any other national security threat into the United States.”