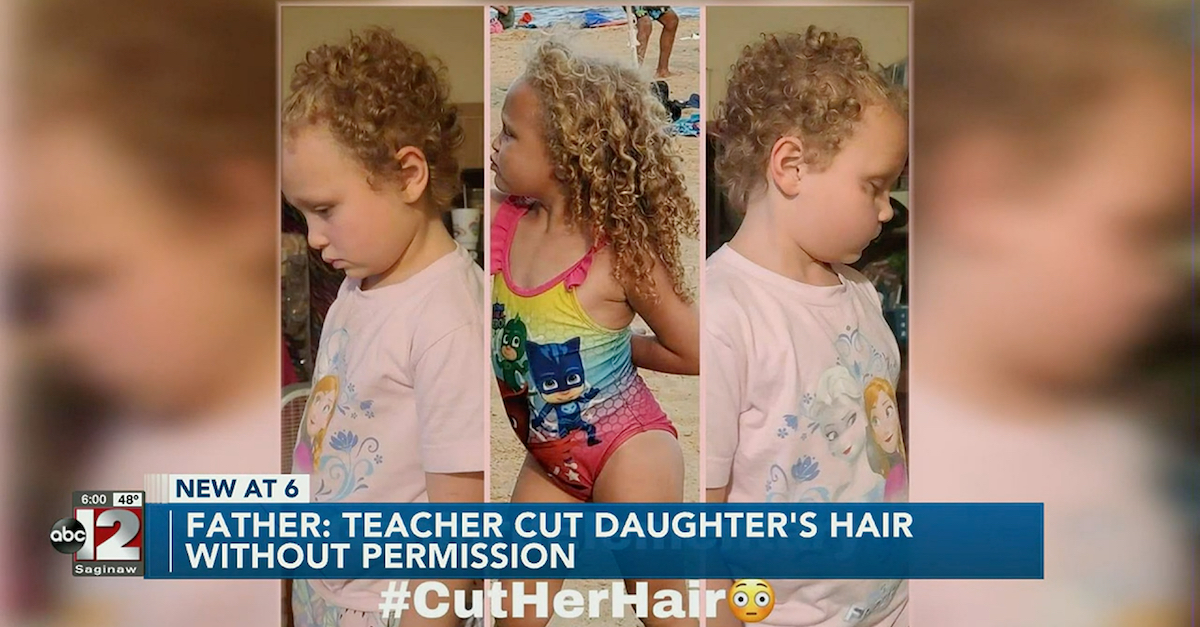 A before photo (middle) and after photos (left and right) show Jurnee Hoffmeyer’s hair cuts.

An elementary school “Library Teacher” who is also a beautician stepped in to “fix” the hair of an African American girl whose locks had been cut by a fellow student on the school bus several days earlier. That librarian is now a named defendant in a $1 million civil rights lawsuit filed by the girl’s father.

Jimmy Hoffmeyer of Michigan filed the case on behalf of his daughter Jurnee Hoffmeyer. The lawsuit claims that the librarian, along with the school district and a teacher’s assistant, violated Jurnee’s civil rights. The lawsuit seeks $1 million in compensatory damages.

A complaint filed in U.S. District Court for the Western District of Michigan describes Jurnee as a “seven-year old African-American girl” enrolled at Ganiard Elementary in the Mt. Pleasant, Mich. Public School District. Prior to the incident that resulted in the lawsuit, Jurnee had long, curly hair. Though the district has not filed a response to the lawsuit, some of the remaining facts appear to be contested. According to the plaintiff, another child in school with Jurnee took scissors from a classroom back in March 2021 and cut Jurnee’s hair — allegedly without permission — while the two girls were on the school bus. Jurnee’s father says he took his daughter to a beautician to style her hair around the allegedly unwanted cut before Jurnee returned to school.

However, the dispute soon widened to involve the entire school district.

“A couple of days later, Jurnee returned home with nearly all of her hair cut off down to a couple of inches from her scalp,” the complaint says. That’s because — as the girl’s father asserts — “Jurnee’s Library Teacher, Ms. Moggs had cut off her remaining hair” with the “assistance and/or acquiescence of” a teacher’s assistant named Ms. Jacobs. (Neither of those two school staffers are identified in the complaint by their first names.)

The court document further alleges that neither Jurnee nor her parents granted permission to Ms. Moggs or to Ms. Jacobs to cut Jurnee’s hair. The complaint goes on to argue that the incident was not just a one-time event. Rather, the “[d]efendants had a policy, practice, or procedure that allowed the Defendants to cut the hair of minor African American children without the child and/or the parent’s consent,” the lawsuit says.

The plaintiff raises claims under both state and federal law. Given that teachers and officials should have known that cutting a child’s hair without permission is illegal, the individuals involved are not entitled to qualified immunity, the plaintiff argues. According to the lawsuit, Jurnee suffered significant damages as a result of the hair-cutting incident. Those damages include “mental and emotional distress, embarrassment, humiliation, anxiety about the future, damage to her reputation, and loss of the ordinary pleasures of everyday life.”

Shortly after the alleged incident (but before the lawsuit was filed), a Twitter user shared a statement by the Mt. Pleasant School District which appears to reference the matter. In the statement, the main facts of the event appear similar those alleged in Hoffmeyer’s complaint — but they add or contradict a few key details.

Mt. Pleasant Public Schools acknowledged on Tuesday that one of its employees cut the hair of a mixed-race child and its superintendent says she’s apologized to the family for it. #JusticeForJurnee pic.twitter.com/9jBkDgnmmu

The statement says a student — presumably Jurnee — asked another student to cut her hair on Tuesday, March 23. The second student removed scissors from a classroom without permission and proceeded to perform the haircut as allegedly requested while the two students were on a bus trip, the statement continues. The district’s telling of the incident thus suggests the initial cutting of hair was done with Jurnee’s consent — even if it was accomplished via an improperly obtained set of shears.

“The student [again, presumably Jurnee] grew unhappy and dissatisfied with the way her hair looked after the other student cut it and asked a school library employee to help fix her hair during a classroom visit to the library,” the statement went on.

The district’s version of the events therefore suggests Jurnee consented to the school staff subsequently cutting her hair. The lawsuit alleges otherwise. Either way, the following paragraph of the district’s statement appears to admit at least some level of wrongdoing by the individuals involved:

The school’s statement says the staff cut Jurnee’s hair on Friday, March 26. That’s three days after the other student cut the girl’s hair on the bus.

“Regardless of their good intentions, these actions are unacceptable and show a lack of good judgement on the part of our two employees,” the statement continues. It later says the individuals involved subsequently apologized and would be disciplined accordingly.

In July, the school district released another statement, this time detailing its investigatory findings. The district concluded that “[c]utting a student’s hair on school grounds either with or without parent permission is a clear violation of school policy.” However, “[t]here is no evidence the incident was motivated by racial bias,” the district said. As a result, the employees involved were formally reprimanded, and the librarian who actually performed the haircut was to be “placed on a ‘last chance’ agreement during which time any future violations will likely result in termination.”

“We believe a last chance agreement is appropriate,” the statement explained, “given that the employee has an outstanding record of conduct and has never once been reprimanded in more than 20 years of work.”

Whether Jurnee did or did not ask Moggs and Jacobs to cut her hair is a factual question for a jury to decide should Hoffmeyer’s case proceed to trial. What, if any, relevance Jurnee’s request would have on the defendants’ liability is a question of law for a judge to settle. Whether any malfeasance by the school was the result of racial bias is a separate question that might be answered by a trial.

The lawsuit argues that the blame for what happened should fall squarely on the district and its staff.

“Defendants purposely and intentionally detained, accosted, assaulted, threatened[,] physically abused, and battered the Plaintiff knowing that such use of force was unreasonable and unnecessary under the circumstances,” the document argues.  “Such actions constitute a violation under color of law of Plaintiff’s fundamental substantive due process rights under 42 U.S.C. § 1983 and the Fourth and Fourteenth Amendments to the United States Constitution” (emphases in original).

The lawsuit also alleges a litany of failures by the school district “pursuant to official policy, custom or practice”:

Exemplifying cognitive dissonance as it relates to African Americans;

Failing to diagnose and treat cognitive dissonance and implicit negative social cognition when being exemplified negatively toward African Americans.

Since Jurnee’s haircut occurred, the incident has been the subject of several online campaigns, including the hashtag campaign #JusticeForJurnee and multiple GoFundMe requests.

hi! none of you are talking about the Jurnee Hoffmeyer assault and you really SHOULD be. a 7 year old biracial girl was assaulted and traumatized not once, but TWICE at school and nothing is happening. PLEASE SPEAK UP!!! #JusticeForJurnee pic.twitter.com/L3JF7nxvuM

Attorneys for the parties did not respond to requests for comment.

Read the full lawsuit for yourself below: