Woman Describes Harvey Weinstein’s ‘Chopped Off’ Penis: ‘Something Wasn’t Right About It’ 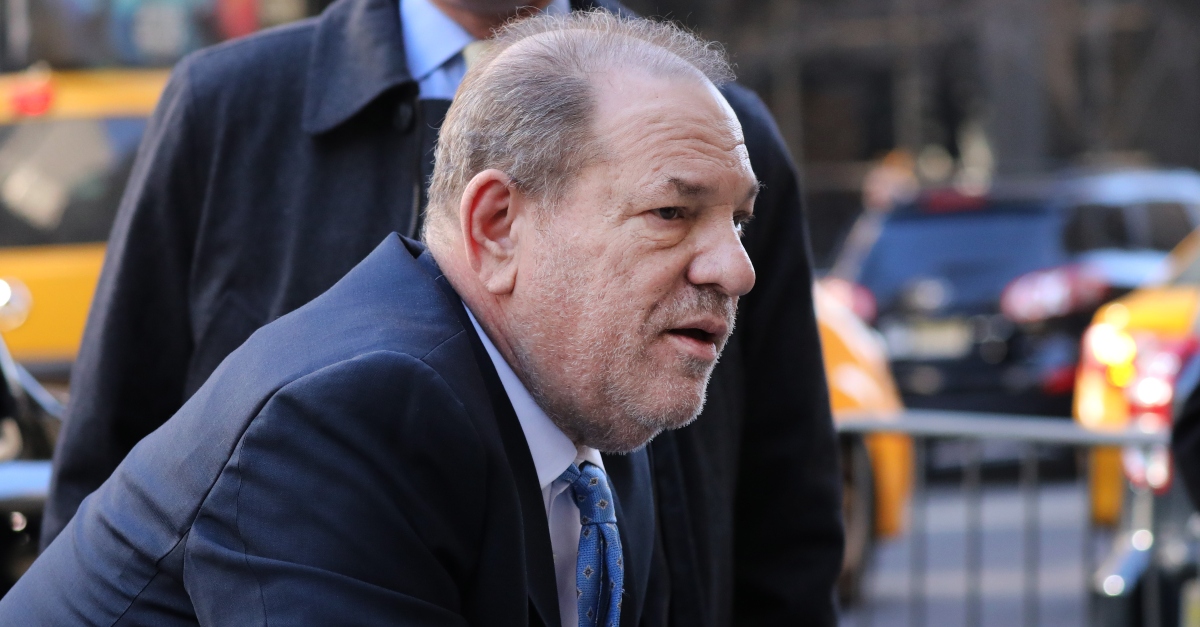 A woman who accuses disgraced movie mogul Harvey Weinstein of sexual assault described his penis deformity in graphic detail Monday, saying it “looked like it had been chopped off and sewn back on, like something wasn’t right about it.”

The appearance of Weinstein’s genitalia is a central part of prosecutors’ case, as they try to show jurors that the accusers’ vivid descriptions of Weinstein’s unusual deformities prove that they had to have seen him naked up close. Weinstein’s lawyers agreed with prosecutors to admit 30 photos of Weinstein’s body as evidence, including close up shots of his penis and the inner thigh area where his testicles were inserted during surgery for Fournier gangrene in 1999.

“I wasn’t trying to look at it, but it was something I hadn’t seen before,” she said.

A New York native who moved to Los Angeles’ Venice Beach area to pursue a career in entertainment, Jane Doe 2 testified in Weinstein’s New York trial as a witness to uncharged conduct. She is a charged victim in the Los Angeles case, with Weinstein facing a single count of sexual battery by restraint for the alleged encounter with her.

Like a woman who testified about being attacked while in Puerto Rico filming Dirty Dancing: Havana Nights in 2003, Jane Doe 2 identified a female Weinstein assistant as a key enabler. In the Puerto Rico testimony, it was Bonnie Hung, who took the stand Friday and said she has no memory of ever meeting the woman or of any events she described in her testimony.

In Jane Doe 2’s testimony, it’s Claudia Salinas, who the woman said Monday was with Weinstein when they went up to his room at the Montage, which is now The Maybourne, after Weinstein said he needed to get ready to give an award to Quentin Tarantino.

At first, the woman said she had thought of Salinas as “my new friend,” but that changed after she left her alone with Weinstein.

“So her giving me this look while she closed the door … I just couldn’t believe that she would do that to me. To another girl. Because there’s a girl code. You don’t do that,” Jane Doe 2 testified Monday.

All of a sudden, she said, Weinstein started the shower and took off his clothes.

“I had never seen someone that big naked so I just couldn’t fathom what was even happening to me right now,” she said. She said she “actually laughed nervously and thought, ‘No, no, no,'” starting to cry as she testified.

“He was just talking about the business and other actresses. And saying, ‘This is what they do. This is how I know you can act,'” she said.

She said she went to the bathroom door as Weinstein “lightly rinsed off,” but “that’s when he came out of the shower in front of me.”

She said Weinstein “was just going on about movie stuff, acting, rambling on” and then “started touching me.” He unzipped the back of her dress and pulled it down to her hips, grabbing her breasts “and jerking off, like squinting at me, not looking at me. Holding me there and talking to me.”

“I was really grossed out by his body and the look he was giving me,” she continued. “I was wondering, ‘How do I get out of here safe? What am I going to do? What are they gonna do to me?'”

She also said she was frozen with fear.

“I was scared of Harvey Weinstein. … that he would hurt me, or send someone to hurt me, or ruin my career, or make my life hell,” she said. She said Weinstein masturbated for a couple minutes, trying to touch her vagina, and she used her hand “as like a shield on top of myself.” He left the bathroom after ejaculating into a towel, and the woman said she pulled up her dress and left, too.

She said Salinas was outside, so “I shot her an evil look.”

“She didn’t say anything. She looked at me. She had this evil look. Like a smirk. Like she roped me in on something,” the woman said. she got into her car and sat and cried while “in complete shock.”

She said she didn’t see Weinstein again, but she ended up seeing Weinstein’s assistant Barbara Schneeweiss from Weinstein Co. at a scheduled meeting the next day, as well as Salinas.

“I told her, ‘Don’t fuckin’ talk to me.’ She didn’t say anything. She stayed there and just was right by me until I went into the office room. She talked to Barbara for a little bit. She talked about job offers that they wanted to give me, I told her I wasn’t really interested in doing reality TV.”

Asked why she went through with the meeting, the woman said she feared retaliation, “that they would call my agency and say, ‘Drop her.'”

“I didn’t know if not going would be worse, so I went because I was scared. I thought he was going to be there and I could have maybe told him off. I didn’t know if it was best to not go,” she said.

She said she received an invitation to a Weinstein Oscar party about a week later but went to an event in San Diego with her best friend instead. She came forward in 2017 or 2018 by calling a police hotline, she said.

“At that point, other people were coming out and I felt safe to do so. I wanted to prevent it from happening to anyone else,” she said. 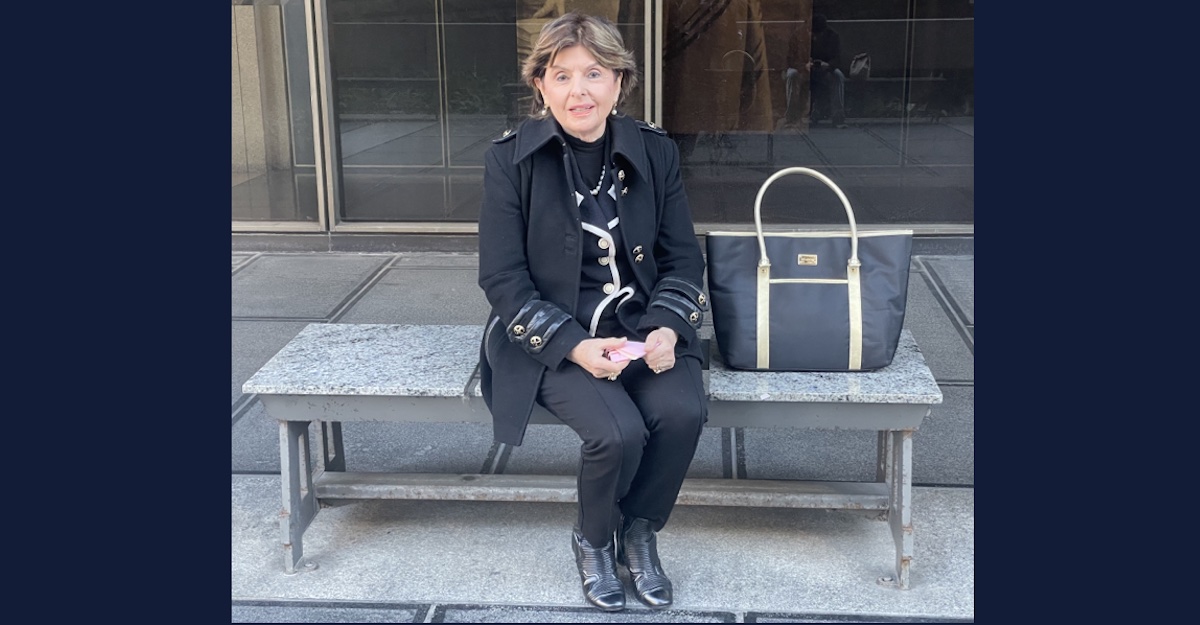 Attorney Gloria Allred speaks with a journalist outside the Clara Shortridge Foltz Criminal Justice Center in downtown Los Angeles on Friday, Nov. 4, 2022. Allred was there representing a woman who is testifying as a victim in Harvey Weinstein’s sexual assault trial. (Photo by Meghann M. Cuniff/Law&Crime)

Jane Doe 2 is one of two women he’s accused of sexually assaulting at a luxury hotel while visiting Los Angeles for the annual L.A. Italia Film Festival that year.

The first woman, an Italian model of Russian descent who was the first trial witness, is identified as Jane Doe 1, while the woman who finished testifying Monday is Jane Doe 2.

Jane Doe 2 is represented by victims rights attorney Gloria Allred, who also represents the fifth victim in the Los Angeles case, identified only as Jane Doe 5. It’s unclear if Jane Doe 5 will testify: Prosecutors did not mention her in their opening, but they told Los Angeles County Superior Court Judge Lisa B. Lench last week they may still call her to the stand, and they’ve refused to dismiss the four criminal charges in which she is the alleged victim.

Besides Jane Doe 5, the other charged accuser still scheduled to testify is Jane Doe 4, who is Jennifer Siebel Newsom, wife of California Gov. Gavin Newsom (D).