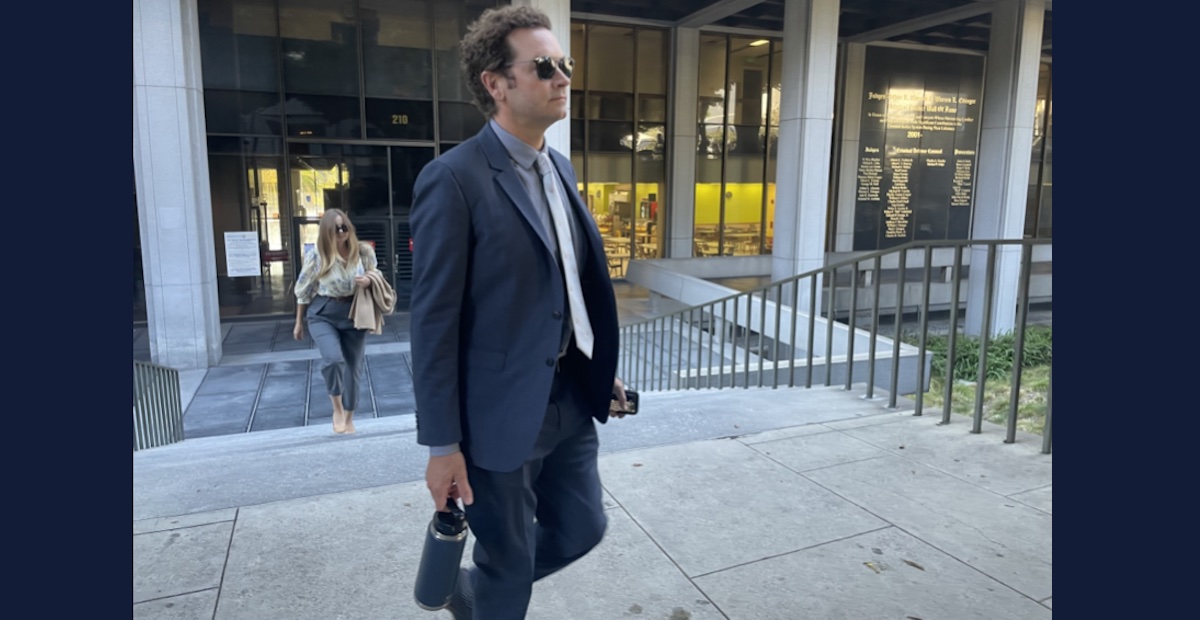 A former girlfriend of That ’70s Show actor Danny Masterson said Thursday that she feared the actor’s ties to the Church of Scientology when she reported he’d raped her, answering questions in a cross-examination partly focused on what she described as Masterson’s aggressive approach to their former sex life.

Christine Carnell-Bixler said she was “terrified” to speak with a Los Angeles police sexual assault detective in 2017 about Masterson’s alleged rape of her in 2001, and it wasn’t because of who the detective was.

She later referenced “the terror campaign that this criminal organization has put upon me and my family,” referring to the Church of Scientology.

“Because it doesn’t matter how many police reports or FBI reports I would file, no one would stop them. No one. And they’re doing it to this day,” Bixler testified Thursday afternoon.

Identified in court as Christina B., Bixler has spoken publicly about her allegations against Masterson using her full name, including in a statement submitted last year to a U.S. House of Representatives committee in which she described herself as “a rape and cult survivor.” She also is suing Masterson in Los Angeles County Superior Court.

She’s one of three women prosecutors have charged the 46-year-old That ’70s Show star with forcibly raping. She took the stand Monday afternoon and was there all of Tuesday, at one point asking Cohen to please stop pacing near Masterson during questioning.

“I don’t want to look over there,” Bixler said, referring to Masterson’s seat at the defense table.

“Ma’am, just tell me where you want me to stand. I’m going to put the podium there,” Cohen said, referring to the lectern. “And as hard as it is, I’m not going to move.”

Cohen has taken a somewhat soft tone in his cross of Bixler while questioning her about highly personal details about her six-year relationship with Masterson, which ended in 2003. He’s also repeatedly ran into problems with Judge Charlaine F. Olmedo, who has cut off questioning for repetitiveness and warned Cohen before Thursday’s lunch break that his questions were too narrative.

“I understand you’re trying to paint a picture and tell a story, but that’s really what argument is for,”  she said.

“Terrified, because of Scientology. I was terrified,” Bixler answered.

“You were not a member of Scientology at that point in time, correct?” Mueller asked.

“I had written them a letter saying that I was no longer a scientologist,” Bixler answered.

Mueller asked if she still had concerns and fears.

“Are you worried about some harassment retaliation as a result of testifying here today?” Mueller asked.

“Since reporting have you experienced harassment and stalking or anything like that?” Mueller asked.

Bixler testified on Tuesday that Scientology ethics officer Miranda Scoggins told her in 2003 “not to use the word rape” to describe what happened with Masterson.

“She explained to me that you can’t rape someone you are in a relationship with,”  Bixler said, recalling her meeting with Scoggins at the Church of Scientology’s Celebrity Centre in Hollywood.

Bixler said she met Masterson when she was 18 and he was 22. She had acting and modeling aspirations, working with Cindy Crawford, earning a spot in a three-month movie shoot and appearing on two network TV shows in 2000 and 2001, Spin City and That ’70s Show. But she’s testified that she’s now realized their relationship was abusive, and that her membership in the Church of Scientology clouded her judgment.

According to a timeline Cohen displayed in court on Thursday, Bixler told her husband, Cedric Bixler-Zavala, about Masterson raping her in 2011. Bixler-Zavala is the lead singer of the progressive rock band The Mars Volta and is expected to testify. Bixler also called a rape hotline about the attack in 2016, according to Cohen’s timeline, then started talking to police. She described the alleged rape on Monday.

“I was sleeping, I woke up and he was having sex with me and I didn’t want to. … I told him I didn’t want to have sex, and he wouldn’t stop. … I felt trapped,” Bixler said, according to Deadline.

On Thursday, Cohen also asked Bixler about consensual sex she had with Masterson, including an incident in New York City after their 2003 breakup in which he took a photo of her without her permission, which she said made her want to stop seeing him.

Bixler confirmed to Cohen that Masterson wanted to have sex more often than she wanted to.

“As your relationship developed or went on in time, my understanding is it’s your position that the sex with you and Masterson became kind of robotic. Would that be a good word to use?” Cohen asked.

“So the sex with Masterson was enver loving?” Cohen asked.

“Even that first-year sex between the two of you was not loving is that correct?” Cohen asked.

“At the time, I didn’t have much to compare it,” Bixler said, saying she don’t know then “what a healthy relationship would be like.”

“Your testimony is that the sex was never intimate?” Cohen asked

“I would say that it was not loving. It was very rough and forceful and he didn’t understand that a woman needs to be prepared. Not just jump on someone and just start doing it their way,” Bixler answered.

“Do you believe he was a bad lover?” Cohen asked.

“Well, you said your way of having sex was to have sex without foreplay, have sex before the woman was ready,” Cohen asked.

“Um, ladies and gentlemen, can you please step into the jury room,” Olmedo asked. She then asked Bixler to leave the courtroom before telling Cohen, “You’re asking basically about how he is as a lover and that’s irrelevant.”

Cohen resumed his exam by asking Bixler if she told detectives that Masterson would ask for sex a million times if she said she wasn’t interested.

“There was no asking; he would just do it?” Cohen asked.

Bixler is listed as Jane Doe 3 in Masterson’s indictment. Jane Doe 2 has not yet testified, but Jane Doe 1, identified in court as Jen B., testified before Bixler, describing an alleged April 2003 violent rape, also at his Hollywood Hills home, that led to a nondisclosure agreement with the actor that paid her $400,000, according to Deadline.