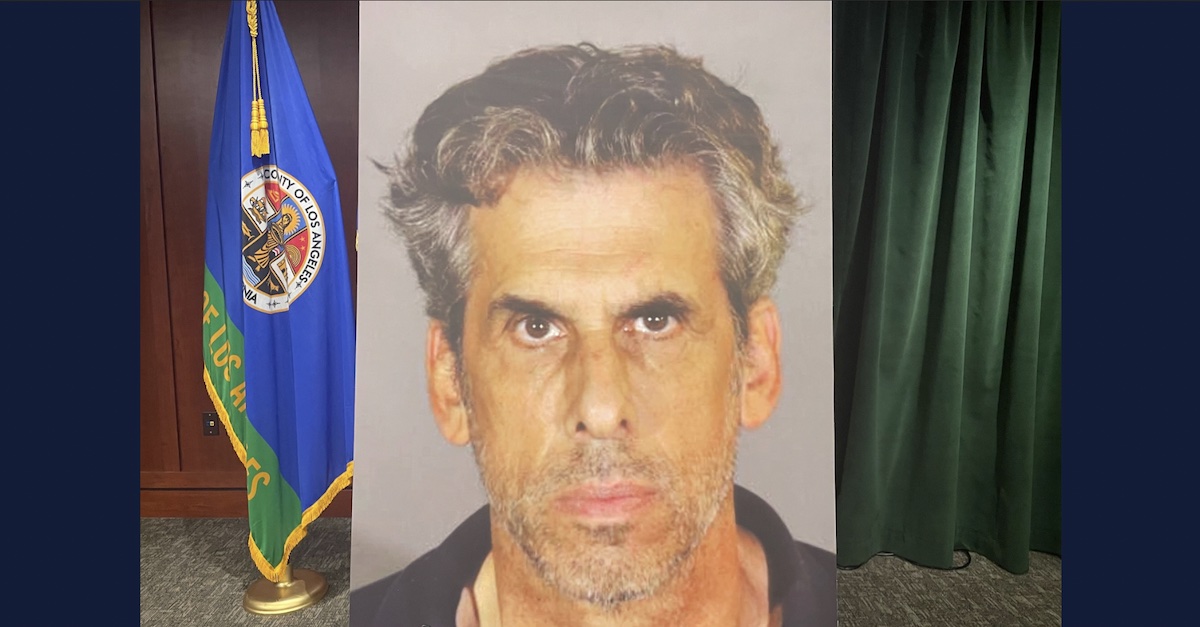 Scrubs co-producer and writer Eric Weinberg is accused of sexually assaulting five women during purported photography sessions between 2014 and 2019 in a new criminal case announced Wednesday.

Prosecutors and police urged anyone who believes they’ve also been victimized by Weinberg to contact them, with Los Angeles police Detective-Supervisor Ryan Lamar describing the investigation as “ongoing, sensitive and confidential.”

“We know that there are many more,” said Los Angeles County District Attorney George Gascón.

Under investigation for years, Weinberg, 62, was arrested Tuesday but is out of jail after posting $5 million bond. Gascón said his office asked a judge to keep Weinberg in jail without bail, but the judge refused.

“Mr. Weinberg was able to commit his crimes using his power and wealth and privilege, and he has now been able to leave custody using his wealth,” Gascón said. “I believe that we all collectively should be angry about a system that allows a person that may be a danger to others to continue to be out there just simply because he can afford to do so.”

Lamar wouldn’t discuss how exactly police are monitoring Weinberg now that’s out of jail but said, “We’re watching him that’s for darn sure.”

The alleged assaults occurred between 2014 and 2019, but police are investigating other assault allegations from years earlier, Lamar said. Lamar said Weinberg was investigated in 2014, and “a recent case in the beginning of this year made us re-look at everything.”

“That’s what kind of reopened the other investigations, and we started digging into all of those,” Lamar said.

Weinberg was initially arrested in July, and investigators have heard from “dozens of additional potential victims” since then, according to a press release.

“On two separate occasions in 2014, Weinberg approached two women at public locations and told them he was a photographer. In each instance, he was in communication with the victims who eventually went to his home where he is accused of sexually assaulting them,” according to the release. “In 2017, the defendant used the same ruse to bring a young woman back to his house where he allegedly sexually assaulted her. Weinberg also is accused of sexually assaulting two women in separate incidents in 2018 and 2019.”

Gascón, other prosecutors and Los Angeles Police Department officials were joined Wednesday by the DA Office’s Bureau of Victim Services director Tanishia Wright, who encouraged people who believed they’ve been victimized by Weinberg to contact her bureau.

“Even if you do not wish to go to through the legal process, you are still entitled to victim services,” Wright said.

Gascón, who recently survived a recall challenge that cast him as soft on crime, said the case underscores the need for society to re-think how sexual assault is treated and how women are expected to act.

“I believe that as a society we must do more to protect women and girls. Socially, for far too long we have accepted the assaults and the sexual assaults as the reality that women must guard against,” Gascón said. “I also believe that we have developed a culture where sexual assault as a crime has not been prioritized, and I want to assure everyone that we in this office will hold sexual assailants accountable no matter who they are.”

“In this particular case, we had a man who believed he could do great harm and yet remain untouchable,” the district attorney continued.

Weinberg is scheduled to be arraigned on Oct. 25. He could not be reached for comment, and no attorney is listed for him in the online court file.

The defendant’s IMDb page also shows producer credits for the shows Californication and Anger Management, among others.