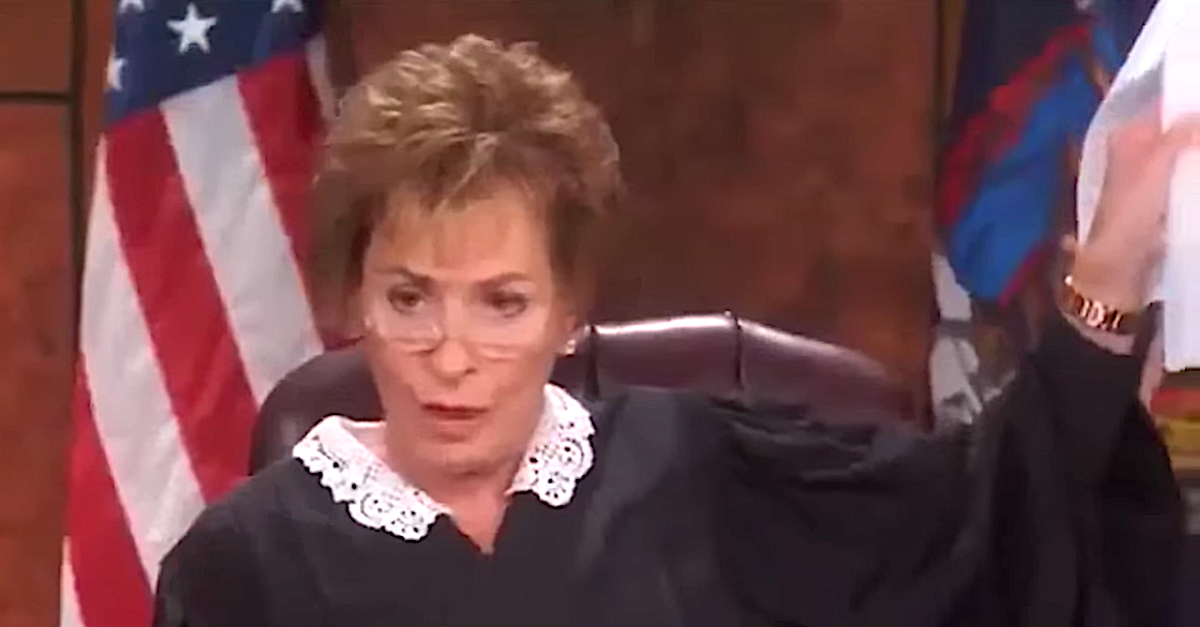 Judge Judy — Judith Sheindlin — is a named defendant in a lawsuit challenging a series of deals which transferred the ownership of her broadcast’s archives. The archives, the suit indicates, are worth millions of dollars.

Among the claims is breach of contract. Sheindlin, when reached by Deadline for comment, seemed to suggest in a less-than-bar-exam-friendly fashion that privity did not exist and, therefore, no contract existed:

“If [breach of contract] is the basis of [the] lawsuit, here is my challenge: If [the plaintiff] can produce a contract, signed by me and Mr. Lawrence on the same page, at any time in history from the beginning of time, I will toast that contract, smear it with cream cheese and eat it on national television.”

Plaintiff Rebel Entertainment Partners, Inc., accuses a series of defendants, including Big Ticket Television, CBS Studios, the CBS Corporation, Her Honor, Inc., and a series of unnamed Does of failing to pay a cut of the sale price of the Judge Judy archive. Rebel Entertainment claims it is “contractually entitled to a percentage of” the sale price, which it noted is a “considerable sum.”

The plaintiff is a successor to Abrams, Rubaloff & Lawrence, the talent firm which in the mid-1990s recruited Judge Judy to become a national star.

The opening paragraph of the lawsuit reads like a soap opera script:

Disgraced media mogul Les Moonves may have been shown the door at CBS in 2018, but not before he conspired with other CBS executives, including former CBS programming chief Armando Nuñez, to avoid embarrassment over his colossal mismanagement of the sale and repurchase of the back-episode catalog for the Judge Judy television program. In 2015, Moonves and his loyal lieutenant Nuñez seriously underestimated the value of the episode library and sold the rights to these episodes to series star Judith Sheindlin for a song. However, Sheindlin understood that she was now sitting on a gold mine and recruited Lisbeth Barron of Barron International Group to help market the Judge Judy episode library to potential buyers. In 2017, when Moonves and Nuñez got wind of the fact that Sheindlin and Barron were shopping these episodes to buyers with an asking price in the neighborhood of $200 million, they realized they had blundered and needed to buy back this valuable asset for CBS. Moonves knew that he would look like an incompetent buffoon if he had to explain to the CBS Board of Directors that he had essentially sold the Judge Judy back catalog for a pittance less than two years prior, but was now proposing to buy it back for tens of millions of dollars. Moonves and Nuñez then realized that they could pull a fast one on the CBS Board. They would require Board approval for any purchase of $100 million or more. Moonves and Nuñez’s solution: pay Sheindlin just under $100 million so they could evade Board scrutiny. CBS thus paid Sheindlin between $95 and $99.99 million for the rights to the Judge Judy episode library that Moonves had sold for virtually nothing.

Rebel Entertainment says it “is entitled to receive five percent (5%) of the Show’s net profits,” which basically boil down to the “gross receipts” of the show after production and distribution fees and expenses are calculated and deducted.  Rebel Entertainment argues that the sale of the episodes by Big Ticket Television, the show’s producer, was only supposed to occur “subject to the rights of Participant” or “including any or all rights of Participant.”  (Rebel says it is the “Participant.”)  “Accordingly, a sale or assignment by Producer subject to the rights of Participant would contractually obligate the purchaser/assignee, in the same manner that Big Ticket had been obligated, to provide Rebel its contractual compensation,” the lawsuit argues.

Here’s how the sale to Sheindlin herself and then to CBS was said to have gone done (Judge Judy’s salary is herein revealed):

That meant Sheindlin, the lawsuit argues, began in 2015 to owe Rebel its cut of the money.

The 2015 Agreement provides . . . that Sheindlin would continue to work as the central talent in the Show for three additional years in exchange for monetary compensation and the transfer of the Library to Sheindlin and HHI. Because Big Ticket, the Producer, exercised its right to sell the Library to Sheindlin in 2015 “subject to the rights of Participant,” Rebel did not receive a contractual percentage share of the proceeds from the sale. However, in the event Sheindlin, who is not defined as Producer under the Agreement, subsequently sold the Library, Rebel would be entitled to immediately receive its percentage share of the proceeds from any such sale.

“Despite the fact that CBS Studios, Big Ticket and Sheindlin agree that Sheindlin, who is not a Producer as defined in the Agreement, sold the Library to CBS Studios in 2017, to date Defendants have refused to compensate Rebel for its portion of the proceeds from that sale,” the lawsuit goes on to say.  “Nothing in any of the contracts at issue would allow for a second sale of the Library to be made “subject to the rights of Participant,” as that provision can only be applied to the Producer, defined as “Big Ticket Pictures, Inc., as subsidiary of Spelling Television Group, Inc.”

The lawsuit alleges two breaches of contract, a breach of the implied covenant of good faith and fair dealing, and a right to an accounting (“which will be used to calculate the amount of money owed to Rebel”).  The lawsuit seeks several awards of compensatory damages “in excess of $5 million” and as is otherwise calculated through an accounting.  It also seeks prejudgment interest, costs, and other relief.  A jury trial is requested.

Sheindlin herself was a defendant in an earlier lawsuit over the show’s profits filed by the show’s creators. Indeed, as is the case with many highly profitable endeavors, the show has been embroiled in litigation for some time.