Body camera and other video released this week shows a confrontation which led to the eventual police shooting of Tyrell Wilson, 32, in Danville, Calif., on March 11. Officer Andrew Hall, a 7-and-a-half-year veteran of the Danville Police Department, confronted Wilson in an intersection, the video shows. When Hall pulled the trigger, his body camera revealed that he appeared to have a sticker of a “Thin Blue Line” flag attached to his service weapon.

Andrew Hall’s gun has what appears to be a sticker of a “Thin Blue Line” flag attached to its grip.

A March 11 press release from the Contra Costa County Sheriff’s Office said Hall was dispatched at 11:48 a.m. after police “received several calls from motorists regarding a person who was throwing rocks off the Sycamore Valley Road overpass onto Highway 680.” (In California, that suspected crime would seem to qualify as both assault with a deadly weapon and battery.) The news release continues:

A Danville Police Officer arrived at the scene and contacted the subject in question in the area of Sycamore Valley Road and Camino Ramon. The officer approached the subject who was standing on the street. As the officer tried to talk to him, the subject pulled out a folding knife and then opened it. The officer ordered him to drop the knife several times. He then advanced toward the officer, who discharged his weapon striking the subject once. The fire department and an ambulance were called and responded to the scene. The subject was taken to a local hospital where he is being treated at this time.

A subsequent release dated March 13 identified both Wilson and Hall. Wilson was described as “a 32-year-old transient who was staying in the area of the Danville Sycamore Valley Park & Ride on Sycamore Valley Road.” He was listed in critical condition. Hall was said to have been placed on “paid administrative leave per department policy.”

A third release dated March 17 indicated that Wilson died at the hospital:

The Office of the Sheriff recognizes the impact an event like this can have on the community and is committed to full transparency of all the facts. Sheriff’s investigators continue to work with the District Attorney’s Office on investigating this incident pursuant to the countywide law enforcement involved fatal incident protocol.

Body camera video of the March 11 incident was released on April 21, about the time Hall was charged with voluntary manslaughter in an unrelated deadly on-duty shooting in 2018.

The body camera video shows Hall exiting his squad car and approaching Wilson at the same intersection where the shooting occurred.

“Who are you?” Wilson repeatedly asked.

Hall called for “cover” on his police radio.

“No,” Wilson continued to say as Hall approached.

“I’m not playing this game, either,” Wilson said.

“And who are you?” Wilson asked.

“Authority of what?”  Wilson appeared to retort several times in response. 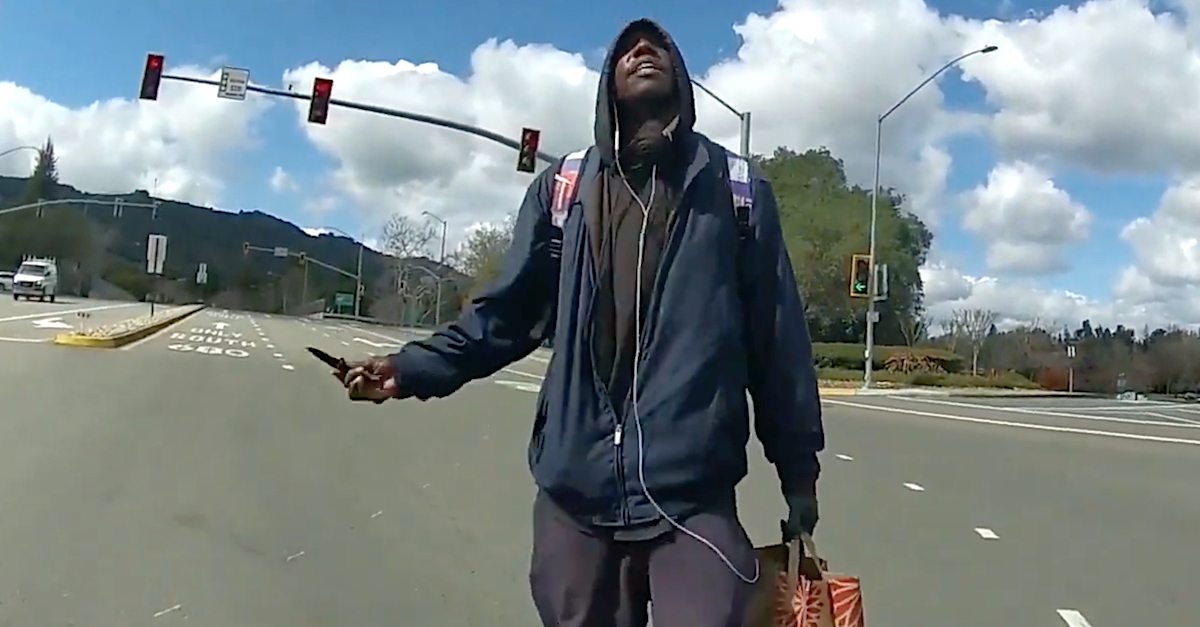 Tyrell Wilson brandished a knife seconds before he was shot.

“Touch me and see what’s up!” Wilson then said at least twice. Wilson produced a knife in his right hand. 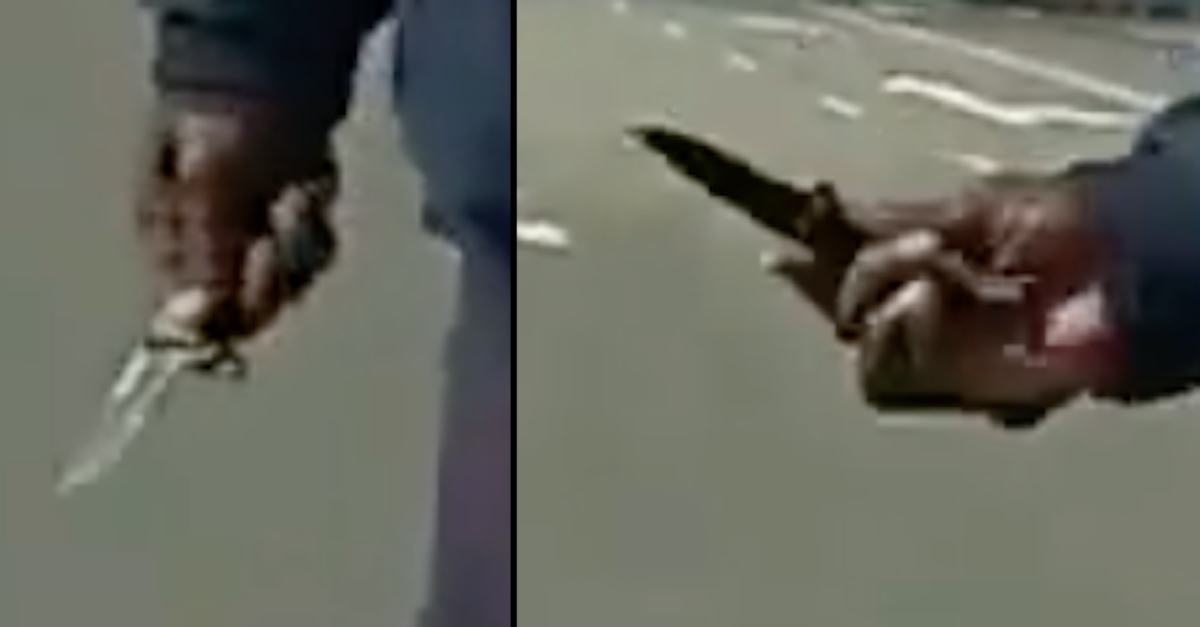 Video from other angles also released by the sheriff’s office shows Hall advancing toward Wilson during most of the encounter as Wilson walked or backed away. After Wilson drew the knife, Wilson took steps toward Hall before Hall pulled the trigger split seconds later. Wilson immediately collapsed to the ground. Video showed that he was bleeding profusely. 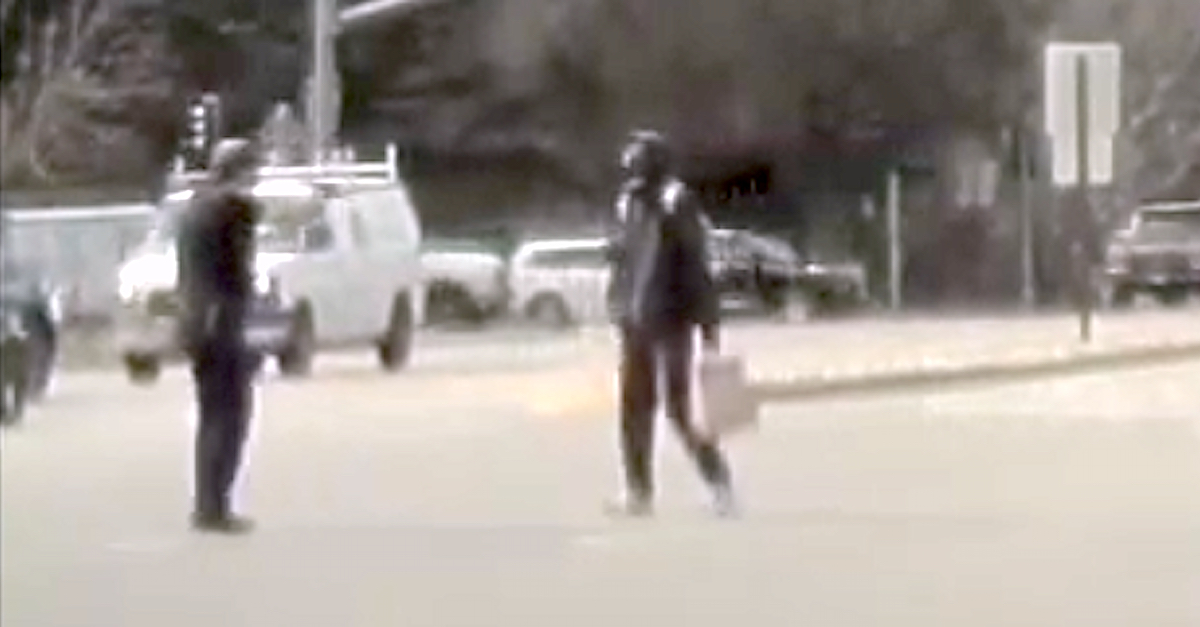 A screen capture from a stopped motorist’s dash cam shows Wilson advance on Hall split seconds before he was shot. Though it is difficult to see due to the white service van in the background, Hall’s arms are outstretched, and he is holding his pistol.

“Hey, why’d you shoot him man?” someone off camera yelled to Hall several times after the shooting.

“I’m fine, just — you know,” Hall later said when a responding officer asked him if he was okay.

Officers who began arriving at the scene donned gloves and tried to help Wilson. None asked Hall what transpired.

Hall eventually moved to a nearby cruiser and shut off his body camera video when another officer told him it was okay to do so.

Around the time of the release of the video, Hall was charged criminally for shooting and killing Laudemere Arboleda during a Nov. 2018 traffic pursuit. Hall shot Arboleda nine times, Contra Costa County District Attorney Diane Becton said during a news conference. Hall’s defense attorney is arguing that shooting qualifies as self-defense and as the defense of another.

“When Officer Hall fired his weapon, he felt not only was his life in the imminent danger by virtue of this car approaching him, but he felt his Sergeant’s life was in danger as well because he saw a sergeant arrive and believed his sergeant was in the path of the car,” Hall’s attorney Michael Rains told San Francisco ABC affiliate KGO-TV.

“Officer Hall used unnecessary and unreasonable force when he responded to the in-progress traffic pursuit involving Laudemere Arboleda, endangering not only Mr. Arboleda’s, life but the lives of fellow officers and citizens in the immediate area,” she said.