‘If I Could Give You Jail Time, I Would’: Michigan Judge Shames 72-Year-Old Cancer Patient for Being Too Weak to Maintain Lawn 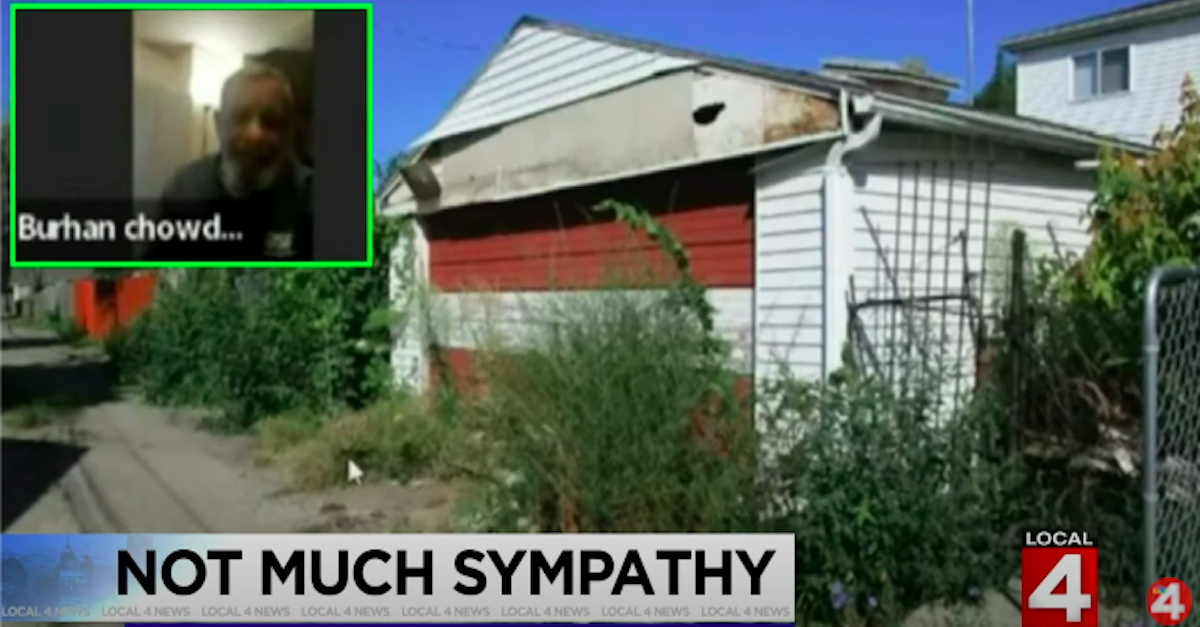 A photo of Burhan Chowdhury’s home during his hearing before Judge Alexis G. Krot

A judge in Michigan has come under fire after she publicly upbraided a 72-year-old cancer patient for failing to properly maintain upkeep on his yard despite medical treatments leaving him frail and weak. Judge Alexis G. Krot on Wednesday told Burhan Chowdhury that he should be “ashamed” that his yard was an eyesore during a video hearing, even saying she would have him put him behind bars if it were within her power, Detroit NBC affiliate WDIV-TV reported.

The hearing centered on a ticket Chowdhury received on Aug. 2, 2021 for the civil infraction of failing to keep his “fence walkway, sidewalk, or alley free of weeds or other nuisance vegetation.” The proceeding was held via Zoom video conference.

Asked how he wanted to plead, Chowdhury said in a thick accent that he was “very old” and “a cancer patient,” and repeatedly says he was “very weak” and unable to take care of the vegetation in the area. Throughout the brief exchange, Chowdhury can be heard struggling to breathe, often pausing and taking deep breaths.

But that did not garner any sympathy from Judge Krot of the 31st District Court, who shamed the elderly man from Hamtramck, Michigan.

“You should be ashamed of yourself,” Krot responds, adding, “If I could give you jail time on this I would.”

She then issued him a fine of $100 to be paid by Feb. 1, and said to Chowdhury, “You’ve got to get that cleaned up. That is totally inappropriate.”

A younger man who had been sitting next to Chowdhury, later identified as his 33-year-old son Shibbir Chowdhury, then stepped in and tried to help better explain the situation.

“Is it forgivable ma’am, because my father is currently very sick and we cleaned it up,” Shibbir can be heard saying before an exasperated sounding Krot cuts him off.

“Have you seen that photo?” she asks.

“Yes,” Shibbir responds as his father can be heard repeating, “I am very sick, ma’am.”

“That is shameful. Shameful,” Krot exclaims. “The neighbors should not have to look at that. You should be ashamed of yourself.”

In an interview with The Washington Post, Shibbir Chowdhury reportedly said that he normally helps his father with upkeep and yard maintenance, but last year when the ticket was issued he had been out of the country in Bangladesh for approximately three months. Upon returning to the U.S., Shibbir reportedly learned about the ticket and they took care of the overgrown vegetation in the walkway. He conceded that his father broke the ordinance but said nothing could prepare him for Judge Krot’s reaction.

“She was telling my father, a sick person, that he should go to jail. That’s ridiculous. You can’t give a 72-year-old person jail time for not cleaning an alley,” Shibbir reportedly said. “I was really shocked by it. I didn’t expect her to yell at us in this kind of a situation.”

Insider reported that court records indicated the fine was paid on Wednesday.

Krot, who was appointed to the bench in 2016 by Republican Gov. Rick Snyder then elected in 2018, was not permitted to comment on the story given that she is a judge, according to WDIV.