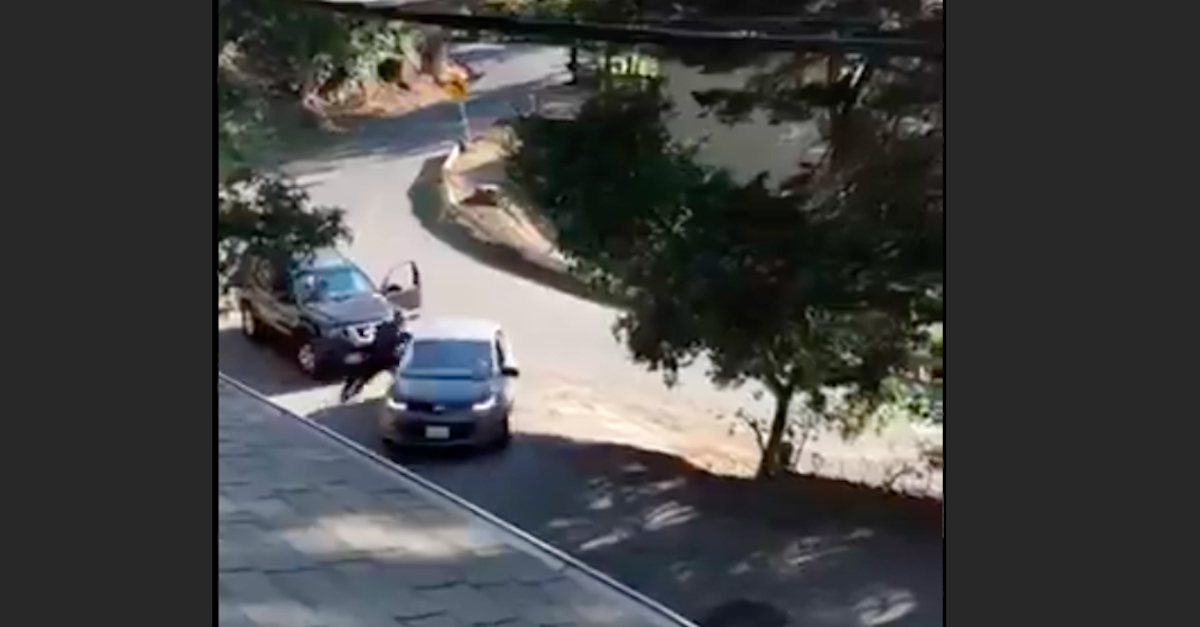 Police in California are reportedly investigating an apparent road rage incident. A driver was caught on video appearing to hit a man on purpose after the man and his family yelled at the individual to slow down in the residential neighborhood.

2/2: In this video, you can see the driver narrowly missing the victim & 2 women before he returns to hit the man on purpose near Doran & Aitken in the Oakland hills. Witness tells me, “This was a very thought-out act & very intentional.” @oaklandpoliceca investigating. Man is OK pic.twitter.com/PO6T6vkz0e

The first clip appears to be filmed from the upstairs window of a house located near Doran Drive and Aitken Drive in the suburbs of Oakland Hills. The video appears to show a family’s car pulled over on the side of the road. The driver and at least one of the passengers are out of the car.

“I don’t want you going out there,” the woman filming the scene says to someone off-camera.

On the street, a female can be heard yelling at the driver, “We reported you. You’re going to jail you stupid fuck.”

Seconds later, the driver, who was reportedly behind the wheel of a Chevy Bolt, can be seen speeding back into the right side of the frame and appears to come within inches of the two family members who were standing in the street in front of their SUV. The driver then continues to speed away out the left side of the frame.

A female member of the family then gets back into the front passenger seat; someone from the house where the person was filming asks the family if anyone was able to get the driver’s license plate number.

“Did you guys get his license plate number,” someone off-camera asks.

“You saw that,” the man on the street says in response as he starts walking towards the house.

“He’s coming back! Careful,” someone shouts at the man as the Chevy Bolt suddenly appears on the left-side of the shot again.

The man steps toward the side of the road, seemingly trying to use his parked SUV as a shield against the other driver.

But the driver of the Chevy Bolt, still appearing to be speeding, drives slightly past the parked SUV and then swerves hard in front of the other vehicle in an apparent attempt to hit the man.

The Chevy Bolt collides with the man, who was facing the fast-approaching vehicle — sending him flying into the air and spinning before the video cuts off.

One of the witnesses on the scene told Lee that the whole ordeal was “a very thought out act and very intentional.” Lee also said that the man who was struck by the vehicle was “OK” and that Oakland Police Department was investigating the incident.

Oakland PD did not immediately respond to an email from Law&Crime seeking additional details about the incident or the status of their investigation.