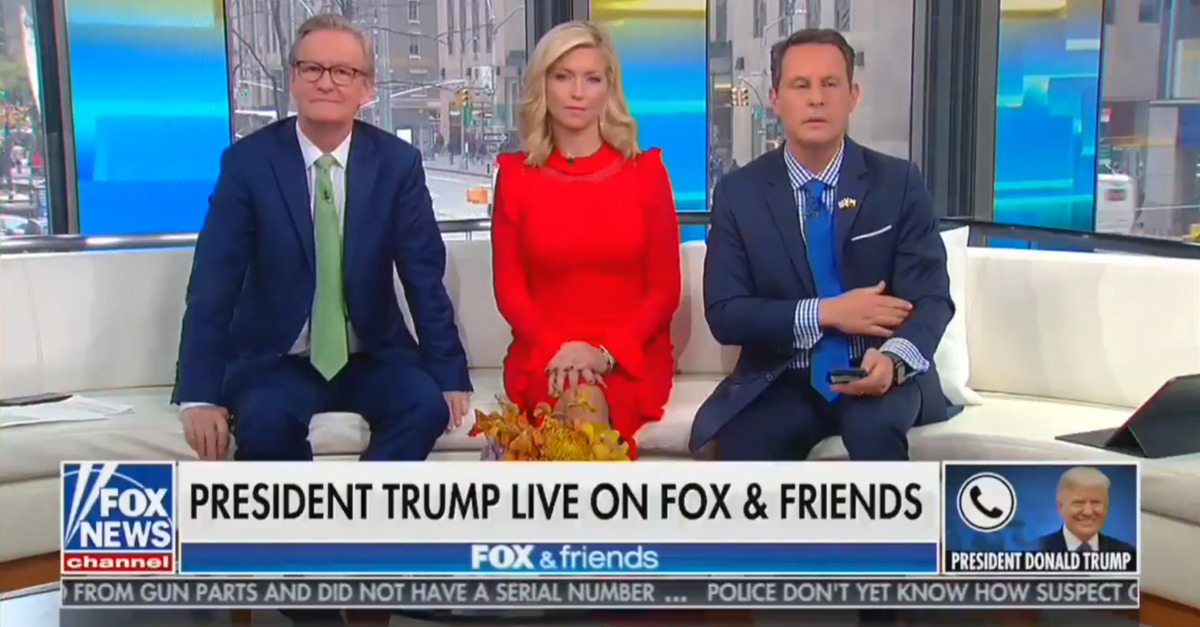 Sometimes you just want to dig a hole.

“By the way, if I didn’t fire Comey, I would have been in some trouble right now,” Trump told the hosts. “Because they were coming after me and I wouldn’t have known that he was a phony. And that Strzok and Page, and all of these people–McCabe–the whole gang of them. We wouldn’t have been able to find it out. Turned out to be the best move I ever made, firing Comey, because they were looking to take down the president of the United States.”

That braggadocio, of course, read something like a confession that the FBI had good reason to be looking into Trump in the first place–and that the president’s subsequent firing of Comey was explicitly keyed toward obstructing the FBI’s investigation.

Denizens of Twitter were quick to offer that interpretation:

Trump just said that if he hadn't fired FBI Director Comey, he'd be in "big trouble" now, because Comey was coming after him.

That description will give ammunition to those arguing an obstruction of justice case.

Trump claims that if he hadn't fired Comey, "I would have been in some trouble right now, because they were coming after me … turned out to be the best move I ever made — firing Comey. Because they were looking to take down the president."

Not quite done with expanding the hole’s depth and width, the 45th president launched into another recitation of some longstanding personal grievances concerning a perceived political plot against him.

“They have the server right? From the DNC–Democratic National Committee,” Trump offered.

“Who has the server?” host Steve Doocy asked.

To which Trump replied:

The FBI went in and they told them “Get out here! You’re not getting it. We’re not giving it to you!” They gave the server to Crowdstrike, or whatever it’s called, which is a company owned by a very wealthy Ukrainian. And I still want to see that server. You know, the FBI has never gotten that server. That’s a big part of this whole thing. Why did they give it to a Ukrainian company?

“Well, that’s what the word is,” Trump admitted. “And that’s what I asked, actually, in my phone call, if you know. I mean, I asked it very point blank. Because we’re looking for corruption. There’s tremendous corruption. We’re looking for–why should we be giving hundreds of millions of dollars to countries when there’s this kind of corruption?”

There is, of course, no such thing as the DNC server and it’s not really missing either–as the Daily Beast’s Kevin Poulsen has detailed:

The “server” Trump is obsessed with is actually 140 servers, most of them cloud-based, which the DNC was forced to decommission in June 2016 while trying to rid its network of the Russian GRU officers working to help Trump win the election, according to the figures in the DNC’s civil lawsuit against Russia and the Trump campaign. Another 180 desktop and laptop computers were also swapped out as the DNC raced to get the organization back on its feet and free of Putin’s surveillance.

Since the DNC’s data was stored on a so-called “cloud” that means the information wasn’t contained in an on-site physical server at the DNC’s headquarters. The DNC’s data was, simply, stored on other people’s computers. The term “cloud” is just a marketing phrase for the old technology previously known as a “network.”

Trump’s recitation of the nefarious Crowdstrike server narrative, however, was also read as another admission of guilt.

“In this call, Trump links foreign aid to Ukraine directly to an investigation of the Crowdstrike conspiracy theory,” noted Vox’s Zack Beauchamp. “He’s basically openly admitting to doing what he’s been accused of! The Fox and Friends hosts seem to know, too. Watch their faces.”

Former White House Russia expert Fiona Hill testified as recently as yesterday that the CrowdStrike conspiracy theory is a “fictional narrative that has been perpetrated and propagated by the Russian security services themselves.”