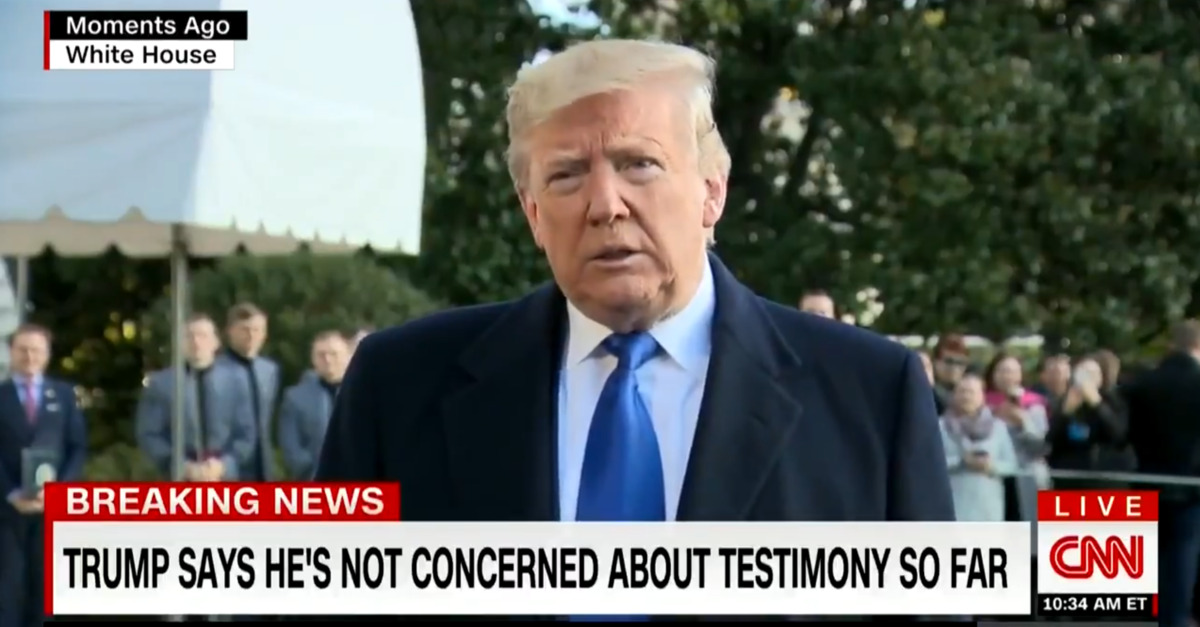 President Donald Trump tried his hand at tort law on Friday by suggesting the intelligence community whistleblower “should be revealed” and that their lawyer should be sued “maybe for treason.”

It appears that Trump was referring to attorney Mark Zaid. The comments were made during a press assemblage on the White House lawn where the president also addressed the closed-door impeachment hearings and the state of the 2020 presidential race.

The suggestion of treason as a civil action, however, quickly sent legal commentators into a tailspin of eyebrow-raising ridicule.

First Amendment attorney and legal commentator Adam Steinbaugh noted: “you… you can’t be sued for treason.”

That’s true. Treason is a criminal charge. Suing someone is an action taken in a civil court. Criminal charges are leveled by the state. Civil actions–which we usually call lawsuits–are usually filed by the state or private individuals in an effort to obtain money or information.

Treason, in other words, is a suggestion that simply makes no sense whatsoever under the present circumstances. This isn’t an issue that’s subject to debate. There’s plainly and clearly no cause of action known as “treason” under any state or federal law in the United States. (And this probably shouldn’t even have to be explained.)

Under the laws of the United States, treason has a very specific and very limited definition. Per the U.S. Constitution, Article III, Section 3:

There’s also a separate codification of treason under at 18 U.S. Code § 2381 which barely tweaks the constitutional definition and also assigns specific penalties for committing the criminal act.

No concept, provision or sleight of legalese that exists in the U.S. legal order would be capable of transmogrifying the above potential crimes into something that anyone could sue anyone else for. The point, now a bit belabored, is basically the end of the story.

Except for maybe the jokes.

you can be sued for anything Adam, that’s what they don’t teach you in law school

On Thursday, it should be noted, one of the intelligence community whistleblower’s attorneys sent White House Counsel Pat Cipollone a cease-and-desist letter demanding that Trump stop calling for their client’s identity to be exposed and to stop using “rhetoric that may endanger their life.”

“I am writing to respectfully request that you counsel your client on the legal and ethical peril in which he is placing himself should anyone be physically harmed as a result of his, or his surrogates’, behavior,” attorney Andrew P. Bakaj wrote.

The whistleblower’s attorney later laid it on the line:

In the best light, such statements seek to intimidate my client–and they have. As I am sure you are aware, my firm was in the process of coordinating with the House Permanent Select Committee on Intelligence to have my client deposed by congressional investigators. However, as a direct consequence of the President’s irresponsible rhetoric and behavior, my client’s physical safety became a significant concern, prompting us to instead state our willingness to only answer written interrogatories [questions].

Trump’s campaign to expose and smear the intelligence community whistleblower has, effectively, given the whistleblower pause about how and whether they should testify. Bakaj says that’s a crime.

Despite this warning, Trump once again called for the whistleblower’s identity to be revealed.

The 45th president is arguably skilled at asymmetric attempts to muddy the waters and that’s as good an explanation as any for what happened on the White House lawn Friday morning. That doesn’t mean necessarily mean any of this is well-advised.

Those most recent attacks on these attorneys and their clients are exactly the sorts of statements cautioned against in the cease-and-desist missive. They’re also the sort of statements that congressional investigators are likely to add to any eventual articles of impeachment.