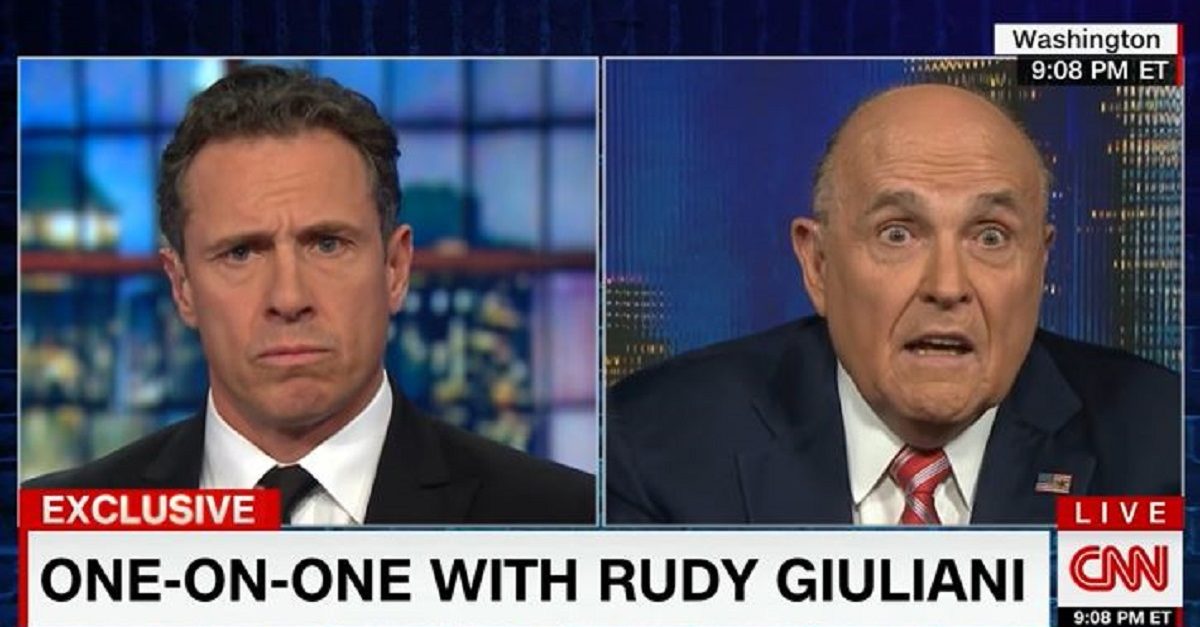 Wednesday night, President Donald Trump‘s lawyer Rudy Giuliani appeared on CNN’s “Cuomo Prime Time,” and discussed the idea of collusion with Russia during the 2016 presidential campaign. While Trump has spent years calling Special Counsel Robert Mueller‘s investigation of this a “hoax” and a “witch hunt,” Giuliani boldly claimed that he never said there was no collusion with the campaign, just that Trump himself didn’t collude with Russia to hack Democratic emails.

“I never said there was no collusion between the campaign, or people in the campaign,” Giuliani said, adding that he has “no idea” if that was the case. He also claimed that Trump never made claims about anyone other than himself.

This went against Trump’s entire “witch hunt” approach to the Mueller probe, which was never about whether Trump himself colluded, but whether his campaign did.

Host Chris Cuomo immediately called Rudy out, stating plainly that the former New York City Mayor had indeed said in the past that there was no collusion. Cuomo was soon joined by a swarm of attorneys on Twitter, who weighed in on Giuliani’s assertion in incredulous, often hilarious fashion.

CNN legal analyst Asha Rangappa was among those who opted to tease Rudy over this.

Ladies and gentlemen, the best lawyer that the President of the United States was able to find: https://t.co/xxSxsZ6hvj

University of Texas Law professor Steve Vladeck pointed out how this is just the latest step in how Team Trump has handled accusations of collusion with Russia.

4. No collusion with the Russians.

5. Even if there was collusion, it’s not illegal.

We’ve officially gone from “no collusion” between the Trump campaign and Russia to “Trump himself didn’t collude, so who cares if someone else did?”

And then there was national security lawyer Brad Moss, who summed it all up with this series of tweet:

There it <expletive deleted> is.

I <expletive deleted> called it.

We are finally to the “well, maybe there was collusion but the president didn’t know about it” portion of this saga. https://t.co/eoB2KyD747

.@RudyGiuliani put a fork in it, old man. You lost.

We are reaching the end, my friends https://t.co/Mvp7TNAOr5

As of Thursday morning, there had been no reaction tweets from President Trump himself.