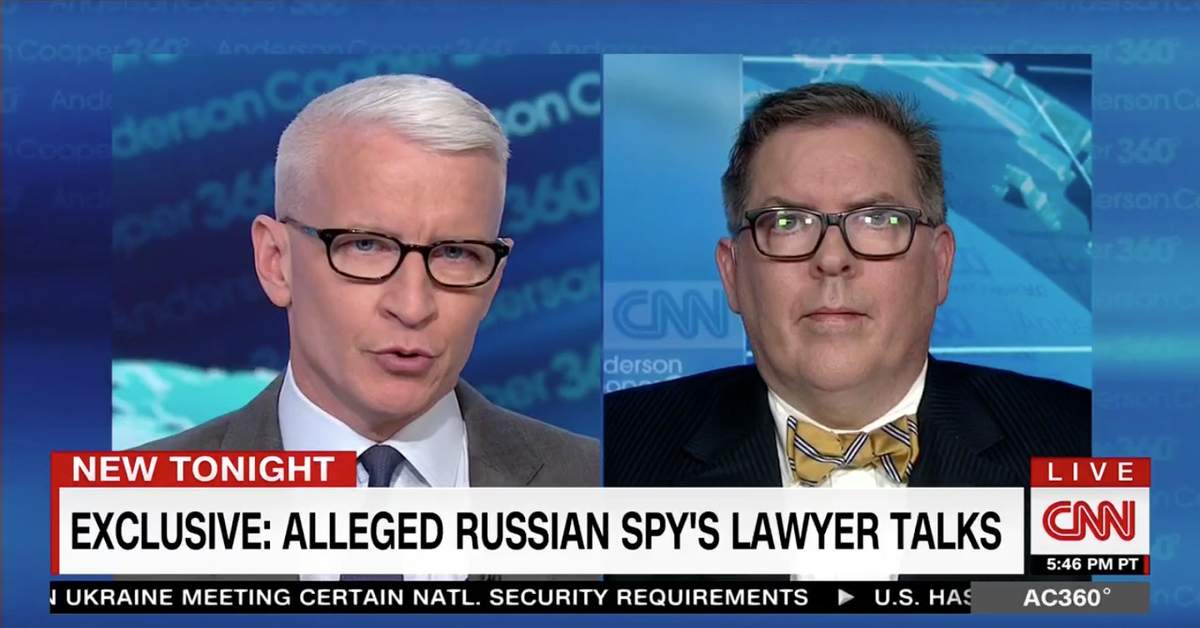 Robert Driscoll, the attorney representing alleged Russian spy Mariia “Maria” Butina, may soon suffer an embarrassing setback by getting off on the wrong foot with the judge in the case.

The government has already prepared an order for U.S. District judge in D.C. Tanya S. Chutkan to sign, this after U.S. Attorney Jessie K. Liu complained about Driscoll’s “extrajudicial statements” about the case.

The prosecution asked that the judge issue an order because Driscoll has “repeatedly made statements and given media
interviews in violation of the applicable Local Rules and in disregard of the Court’s earlier admonition.”

“[These] statements to the media are, at least, substantially likely to interfere with a fair trial and otherwise prejudice the due administration of justice in this case,” they argued.

The prosecution took issue with Driscoll because they maintain that the “offending” comments occurred after the defense had already been “warned […] to abide by the Local Rules.”

Well, it remains to be seen if the judge will agree, but the prosecution has already drawn up a stern rebuke of Driscoll for the judge to sign.

“Pursuant to Local Criminal Rule 57.7(c), and having reviewed carefully the record, including the submissions and arguments of counsel, the Court finds that defense counsel Robert Driscoll has made extrajudicial statements to the media that are substantially likely to have a materially prejudicial effect on the conduct of this case,” the proposed order says. “The Court finds that this proscription is no more restrictive than necessary to address the risk posed by extrajudicial statements about this pending litigation given the current record and the limited ability of the Court to take curative action if prejudicial statements are widely circulated in the media.”

The government’s filing is rife with details about Driscoll’s appearances on CNN and Good Morning America, as well as comments he’s given to outlets like the Washington Post.

As former federal prosecutor Renato Mariotti noted, the government is in essence asking the judge to say Driscoll committed an ethical violation by not refraining from making prejudicial statements to the media or in public.

The government is asking the judge in alleged Russian spy Maria Butina's case that would specifically find that her lawyer committed an ethical violation. https://t.co/6VHZ8LWRXW

The U.S. Department of Justice has stated that Butina was “developing relationships with U.S. persons and infiltrating organizations having influence in American politics, for the purpose of advancing the interests of the Russian Federation.”

Butina is charged with conspiracy to act as a foreign agent, and faces up to five years in prison and a $250,000 fine.