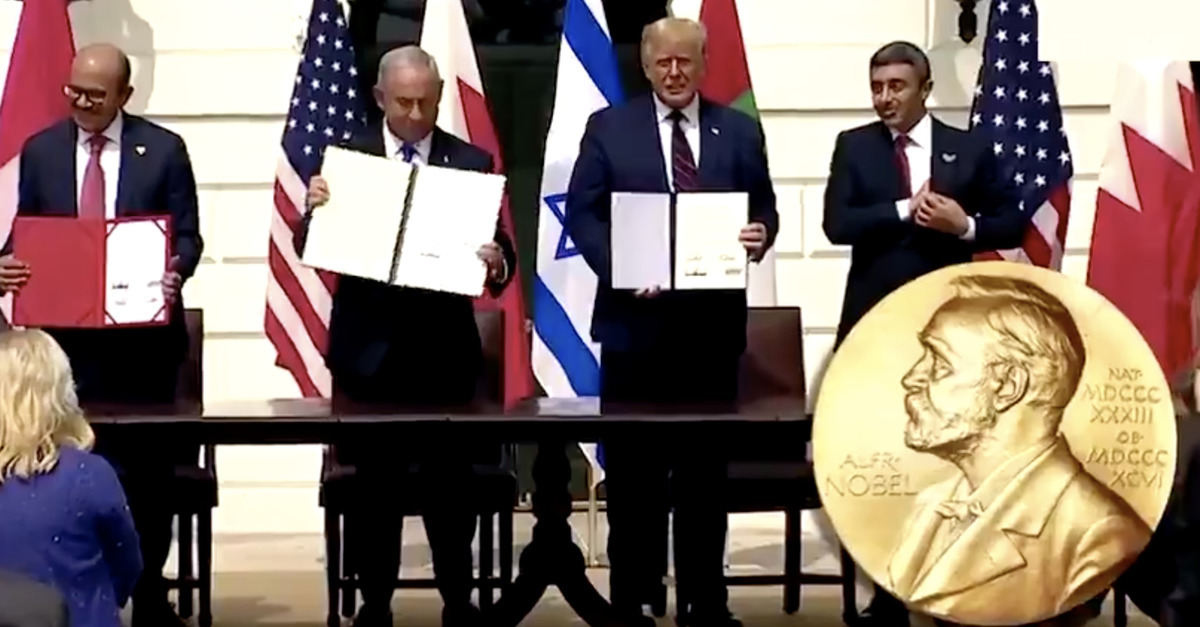 President Donald Trump shared a video late Monday that appears to attempt an awkwardly self-congratulatory montage of Trump’s accomplishments. The video didn’t just tout a prize that was never awarded, it may have violated intellectual property law when doing so.

Forty-two seconds in, the caption “Trump stands for peace” fills the screen; next, the video shows Trump, standing alongside other dignitaries, proudly displaying a document, all while the Nobel Prize graphic plays in the corner.

In other news, President Trump awards himself the Nobel Peace Prize. https://t.co/7QgexcZiAW

A casual observer might well take the images to mean that Trump won the Nobel Peace Prize. Trump did no such thing. Apart from the obvious issue there, there are a couple of potential legal problems with Trump’s video.

First, there’s the potentially unauthorized use of the Nobel Prize image.

This may be of interest to The Nobel Foundation. https://t.co/cQUQPn3cOd pic.twitter.com/O22iJ41L3j

The documents and materials presented at nobelprize.org are generally protected by copyright and related rights or as trademarks and trade names. For use of such material, permission in writing from Nobel Media or the Nobel Foundation is required.

The page continues to explain when such permission might be granted. Specifically, it states that “Permission to use an image or a photo of a Nobel Medal is only granted if the image is going to be used as an illustration to an editorial text about Alfred Nobel, the Nobel Prize or a Nobel Laureate.” Furthermore, it states, “If permission is granted, ‘®© The Nobel Foundation’ must be indicated.”

Law&Crime spoke with intellectual property expert and partner with Leason Ellis Matthew Kaufman, who explained that Trump’s use of the Nobel medal design may constitute copyright and trademark infringement.

“Even if the medal design were not registered with the United States Patent and Trademark Office,” Kaufman explained, “the Nobel Foundation would have common law trademark rights in the image.”

“Beyond a clear misuse of marks for which it apparently has no rights,” he continued, “Trump’s use has the potential to devalue the goodwill associated with such marks by incorrectly associating the Prize with events for which it was not awarded.”

Twitter users picked up quickly on Trump’s use of the image, and some hoped for a lawsuit.

The Nobel Foundation may sue Trump for his unauthorized use of an image of their annual prize medallion. Then he’ll have his new unrestricted PAC funded by working class supporters pay incompetent lawyers to defend him. As usual.

The Nobel Prize folks should sue trump into oblivion. I believe that would a perfect addition to his legacy.

Not to be picky but of all the rules and laws and procedures Trump has bent, broken or destroyed, that one barely registers. And it’s a good bet most of his supporters don’t actually know what the Nobel Prize is. A wrestling thing, maybe? But a fun lawsuit.

Although neither the White House nor the Nobel Foundation responded immediately to a request for comment, it is likely fair to assume that Trump had not been granted permission to use the image of the Nobel Medal, given that he is not a Nobel Laureate.

Furthermore, it’s worth noting that the image used in Trump’s video is not the one that corresponds to the Nobel Peace Prize.

There’s also the question of the music used in video, which is the “Hoe-Down” from Aaron Copland’s ballet “Rodeo.” The piece was composed in 1946, and has not yet entered the public domain. Therefore, Trump would have needed to acquire permission both from the Copland Fund For Music and from the orchestra performing the recording in order to use it in his video.

This isn’t the first time Trump may have used music without artists’ permission. The president has made that something of a habit.

“The campaign repeatedly commits this type of infringement by using copyrighted music in their events and advertising, but there is not any realistic recourse for rightsholders in view of minimal damages, if any, and the one-off use that makes any injunction of TRO fairly useless,” Kaufman said of the president’s use of Copland’s music.

Editor’s Note: This piece was updated from its original version to reflect comment from the Aaron Copland Fund for Music.