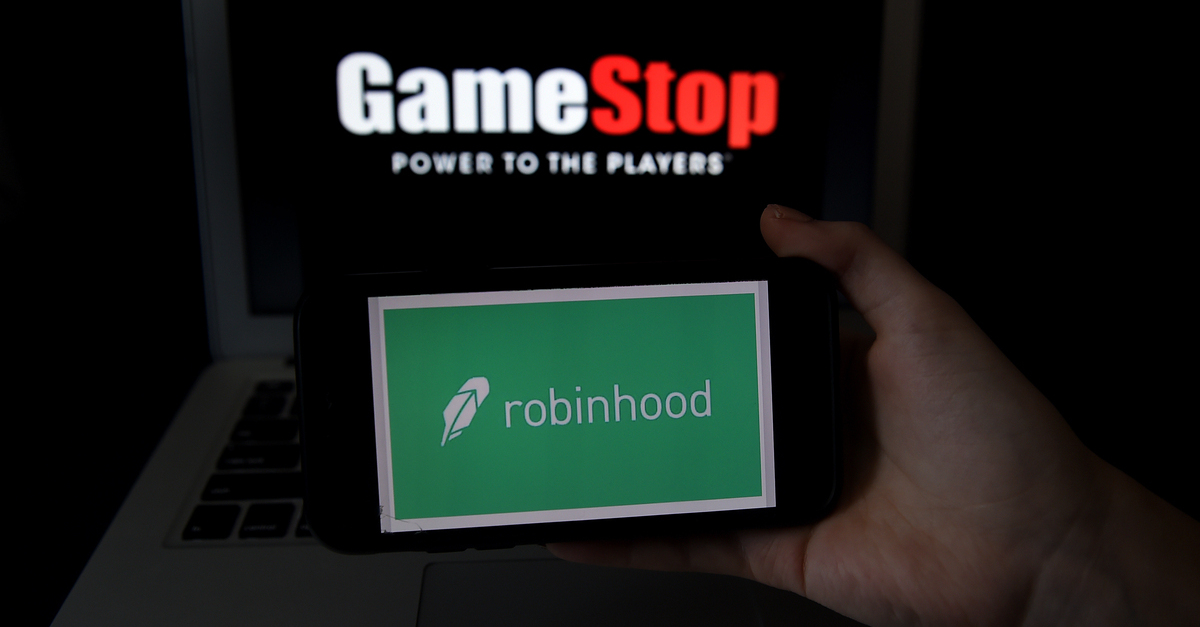 This photo illustration shows the logos of video grame retail store GameStop and trading application Robinhood on a computer and on a mobile phone in Arlington, Virginia on January 28, 2021. – An epic battle is unfolding on Wall Street, with a cast of characters clashing over the fate of GameStop, a struggling chain of video game retail stores. The conflict has sent GameStop on a stomach-churning ride with amateur investors taking on the financial establishment in the mindset of the Occupy Wall Street movement launched a decade ago.

Laws of supply and demand as applied to internet bandwidth are, at the very least, decidedly not uncertain. Especially when dealing with effectively ancient internet architecture.

Unbelievable. ECF in Southern District of New York appears down because people are trying to access the class action against @RobinhoodApp https://t.co/Z3GrqXt51n

As Law&Crime reported earlier on Thursday, lawsuits, at least one of them a class action, were filed against the wildly popular retail brokerage Robinhood over the company’s decision to freeze trading on certain equities favored by the r/WallStreetBets subreddit after several days of intense buying pressure forced multiple hedge funds into billion-dollar losses.

The demand for those court filings might be said to have been commensurate with–or at least somewhat to–the organic demand for the since-frozen stocks themselves.

Law&Crime, notably, was no different from many members of the public–effectively locked out of the PACER system–and only obtaining copies of those federal filings via links posted on Twitter.

In the parlance of Reddit memespeak, collective desire to obtain lawsuits, at least one of which was filed in the Southern District of New York (SDNY), by users on various forums dedicated to boosting GameStop and other similar stocks “hugged [PACER] to death.”

The outage might be compared to a distributed denial-of-service (DDoS) attack–wherein a swarm of online users intentionally overwhelm a server and cause a website not to load.

In this case, however, unheard of hunger for the lawsuits was apparently sparked by genuine outrage over the decisions made early morning Thursday by Robinhood and similarly situated trading portals.

“First of many lawsuits I hope 🤞🏻 out of this bullshit!!!!” a popular post on the subreddit reads. “#DownWithTheHOOD.”

A similar post is titled: “You get what you f**king deserve! UPVOTE!”

Despite the server outage, the lawsuits were heavily reported on and are likely the first of many legal actions.

“Robinhood purposefully, willfully, and knowingly removing the stock ‘GME’ from its trading platform in the midst of an unprecedented stock rise thereby deprived retail investors of the ability to invest in the open-market and manipulating the open-market,” the first complaint, filed by Robinhood user Brendon Nelson, alleges.

[Robinhood] halted trading on its securities exchange platform of Blackberry (BB), Nokia (NOK), and AMC Theatres (AMC) for retail investors. On information and belief, they have continued to allow trading for institutional investors. Richard Joseph Gatz (hereinafter referred to as the “Plaintiff”) owned two (2) options contracts for BB at the time of the trading halt. The value of these options decreased by almost two-hundred percent and the BB stock price fell over ten dollars ($10) from the prior days close. On information and belief, the halting of trading of these stocks was to protect institutional investment at the detriment of retail customers. Furthermore, this appears to be in lock-step with other securities trading platforms, such as Ally Financial, TD Ameritrade and potentially others.

As of this writing, PACER was back up-and-running–if a bit slow to respond.

“We are aware of concerns raised regarding activity on the Robinhood app, including trading related to the GameStop stock. We are reviewing this matter,” the statement said.