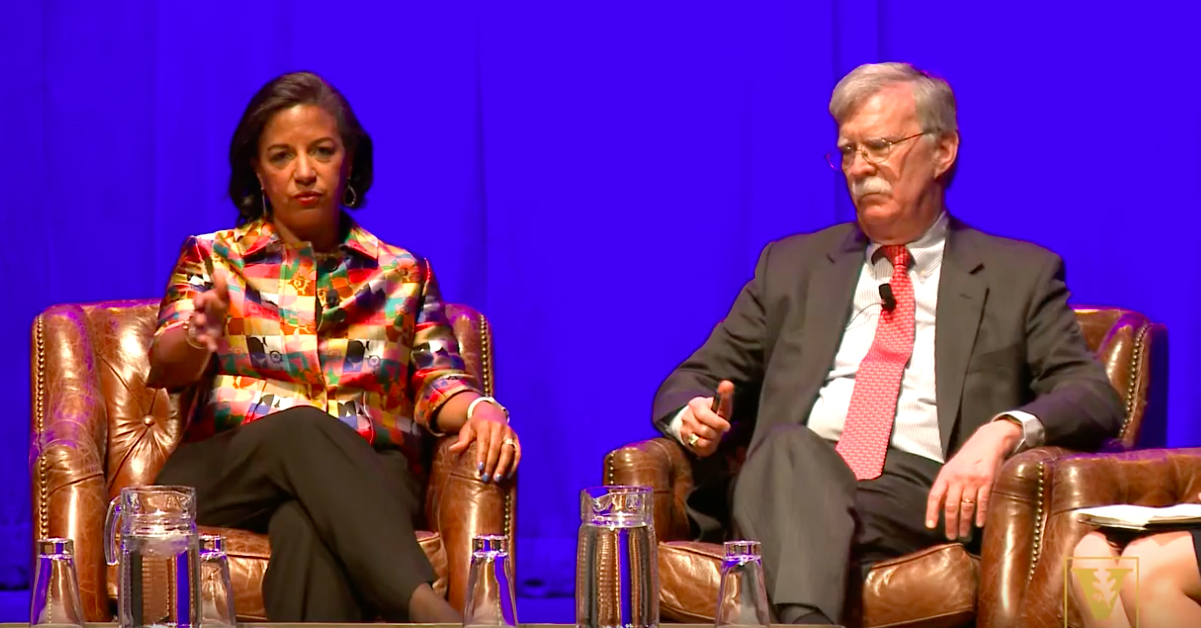 Former Obama administration National Security Advisor Susan Rice levied a series of hard criticisms at one of her successors, suggesting John Bolton breached his constitutional duty by choosing to remain silent during the impeachment of President Donald Trump.

“I thought a lot about if I had been in that position how would I have approached it, and I’ll be honest – it’s inconceivable to me that if I had firsthand knowledge of gross abuse of presidential power that I would withhold my testimony from a constitutional accountability process,” Rice, who was seated alongside Bolton, said Wednesday during a lecture series at Vanderbilt University.

“In no case did I say I would reject a subpoena,” Bolton responded.

“I can’t imagine withholding my testimony with or without a subpoena,” Rice shot back. “I also can’t imagine, frankly, in the absence of being able to provide the information directly to Congress, not having exercised my First Amendment right to speak publicly at a time when my testimony or my experience would be relevant.”

While Bolton may not have explicitly said he would “reject” a subpoena, he did reject the House’s November request to provide voluntary testimony, citing the White House’s directive not to participate in the impeachment investigation. Additionally, Bolton’s attorney vowed to fight a congressional subpoena in court until they received a “definitive judgment from the Judicial Branch” regarding his “Constitutional duty in the face of conflicting demands from the Legislative and Executive Branches.”

Rice consistently returned to the notion that Bolton was obligated not only to come forward with any relevant information pertaining to the impeachment proceedings, but also to defend his subordinates on the National Security Council. She specifically cited to former NSC officials Lt. Col. Alexander Vindman and Fiona Hill, both of whom provided public testimony to Congress and became targets of President Donald Trump and his supporters.

“That, for me, makes it even more difficult, as a former national security adviser, for me to imagine not being willing to come forward,” Rice said. “I would feel like I was shamefully violating the oath that I took to support and defend the Constitution.”

Bolton defended his decision, condemning House Democrats for committing “impeachment malpractice” by making the process such a partisan affair that it “drove Republicans who might have voted for impeachment away.”

“I will bet you a dollar right here and now my testimony would have made no difference to the ultimate outcome,” Bolton said. “If anybody thinks to the contrary, I just don’t think you knew what was going on in Washington.”