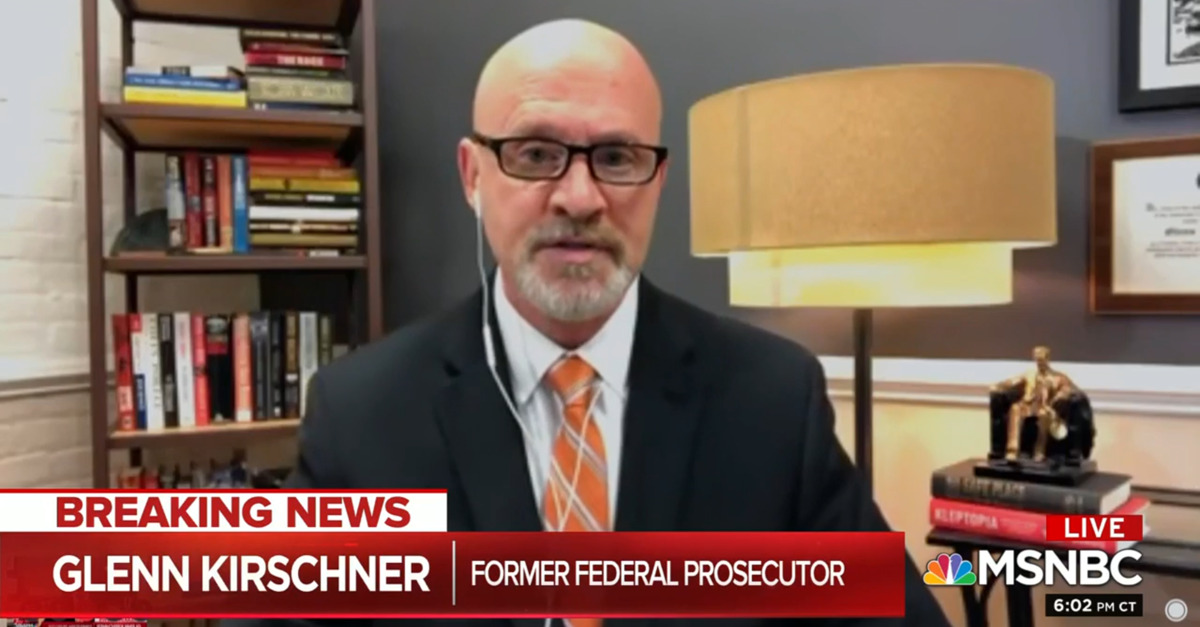 A former federal prosecutor who currently works as an MSNBC legal analyst spread incorrect and false misinformation about federal law and the U.S. Constitution on Wednesday.

“Trump pardons Flynn. No surprise,” Kirschner tweeted. “This is another in what likely will be a steady stream of corrupt pardons. Just as Judge Emmet Sullivan refused to grant [Bill] Barr’s corrupt motion to dismiss, I hope Judge Sullivan sets a hearing on whether this pardon is corrupt [and] hence illegal/void.”

Criticism of Trump pardoning his longtime stalwart, passion play castmember and crony ran rampant, of course, with mindful lawyers castigating the move as “a wild abuse of power.”

Many would-be legal commentators and some lawyers who are apparently unaware of how the law works, however, appeared incapable of not tendering legally baseless opinions vaguely referencing some alleged criminality.

For example, the #Resistance podcast Mueller, She Wrote incorrectly tweeted that Flynn’s pardon is not legal and “can be fought in court” by the incoming Biden administration’s Department of Justice.

For clarification: I do not think the pardon for Flynn is a legal pardon. But my declaration doesn’t make it illegal. A court has to do that, and I hope it does.

None of that is true and was ridiculed by actual legal experts.

“Oh my God, these people are just making it up as they go along,” noted attorney, author and legal analyst Rebecca Kavanagh via Twitter. “No matter how many of these accounts with hundreds of thousands of followers proclaim otherwise, the courts have no authority to review a presidential pardon.”

This is the worst fucking genre of #resistance fan fiction. It’s “the Marshall of the Supreme Court” level.

Kirschner, for his part, was specific about the alleged criminal activity here. The problem is: there’s simply no such thing as an “illegal/void” pardon when it comes to the U.S. president. And, since Kirschner is a lawyer and has a loud public megaphone, commentators apparently expected a bit more.

“PSA: A pardon isn’t ‘void’ because it is ‘corrupt.'” noted University of North Carolina Law Professor Carissa Byrne Hessick via Twitter. “That’s just not a thing.”

“Are federal prosecutors required to attend law school?” he sardonically asked in a tweet. “Between you, Rudy Giuliani, and some other ‘legal analysis’ from former federal prosecutors I am starting get the impression that a strong knowledge of the law is not required.”

“One problem with cable news is that what sells is analysis that makes the audience happy, not analysis that is good,” tweeted journalist Josh Barro. “Glenn will be on MSNBC in the 7pm hour.”

Listening to him will make you dumber. This is true of a *lot* of legal commentators on TV. Legal commentary on TV is worse than other types of expert commentary in part because one thing good lawyers are good at is arguing the bad side of an argument. It’s often their job!

The presidential pardon power is best understood as all-but absolute–when the crimes being absolved are federal.

Article II, Section 2, of the Constitution states that presidents “shall have Power to grant Reprieves and Pardons for Offenses against the United States, except in Cases of Impeachment.” The U.S. Supreme Court has repeatedly held that the power itself is not reviewable.

In the landmark case of United States v. Klein the nation’s high court found that the power to pardon “is granted without limit” and went on to note that “Congress can neither limit the effect of his pardon, nor exclude from its exercise any class of offenders.”

Several decades later, in the case of Ex Parte Grossman, the justices once again rejected the concept of review–this time upbraiding the courts for attempting oversight.

As it turns out, the pardon power is also a check on the judiciary “to ameliorate or avoid particular criminal judgments,” according to the court.

“It is a power entrusted to the executive for special cases,” the majority opinion continues. “To exercise [the presidential pardon power] to the extent of destroying the deterrent effect of judicial punishment would be to pervert it; but whoever is to make it useful must have full discretion to exercise it.”

Kirschner formerly served as an Army JAG prosecutor before eventually joining the the U.S. Attorney’s Office for the District of Columbia as an Assistant U.S. Attorney–where he worked for over two decades under Robert Mueller.

“I regret to inform you that Glenn is doing it again,” tweeted attorney Ken White, summing up the legal community’s response to Kirschner’s “fan fiction” understanding of the U.S. Constitution and pardons.

Kirschner has had the misfortune of being featured by “Bad Legal Takes” a couple of times in a four-day span.