Investor Sues to Get His $2.5 Million Back After Supporting True the Vote’s Flailing Pro-Trump Election Suits 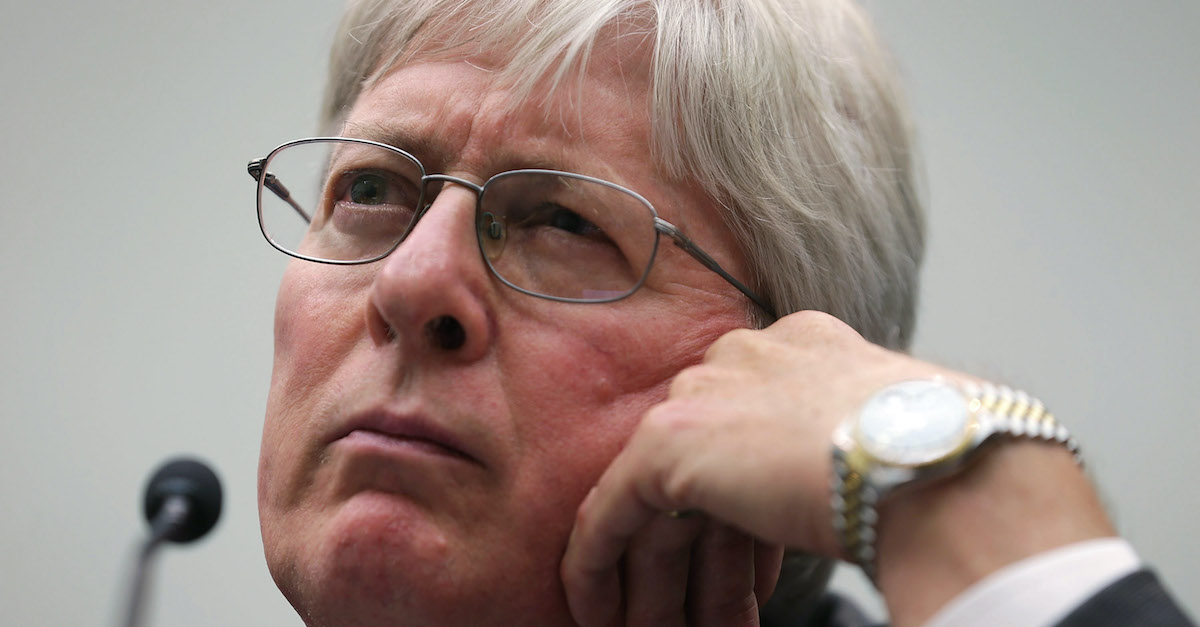 General Counsel for National Right to Life James Bopp testifies during a hearing before House Judiciary Committee September 9, 2015 on Capitol Hill in Washington, DC. Bopp is described in a new lawsuit as True the Vote’s general counsel in since-withdrawn post-election lawsuits for outgoing President Donald Trump.

A venture capitalist sued for the return of his $2.5 million contribution to the non-profit True the Vote’s efforts to overturn the results of the 2020 presidential election through lawsuits that they filed—and precipitously withdrew—in courts around the country.

Fred Eshelman, the owner of the healthcare-focused investment company Eshelman Ventures LLC, claims that he took the Houston-based non-profit at its word when it promised results—or his money back—from his multimillion dollar contribution to hunt for evidence that would support outgoing President Donald Trump’s mass voter fraud narrative.

After a conversation with True the Vote’s president Catherine Engelbrecht, Eshelman says he wired his initial $2 million contribution on Nov. 5, as the tide was turning against the incumbent but before President-elect Joe Biden was declared the winner.

“Based upon Ms. Engelbrecht’s representations regarding defendant’s comprehensive plans to investigate, litigate, and publicize illegal balloting and other election fraud as part of its Validate the Vote 2020 efforts, plaintiff agreed to give an initial gift of $2 million to defendant on the condition that the funds would be used to fund the initial stages of the Validate the Vote project,” the 12-page complaint states, emphasizing the caveat in original. “Specifically, $1 million of that initial pledge was intended to fund efforts to communicate defendant’s findings via the contemplated litigation. Plaintiff advised he would contribute more as the project progressed.”

Eshelman’s contribution was many times larger than the charity typically rakes in annually. True the Vote reported less than $500,000 in total contributions in 2016 and 2017, the last two years for which their tax returns are publicly available.

But Eshelman’s lawsuit says their budget was also relatively modest—”approximately $750,000″—in 2019.

Then, President-elect Biden decisively won by commanding margins in several battleground states. True the Vote hawked an ambitious project giving donors hope in altering those results, and its president Catherine Engelbrecht allegedly estimated that the effort would require a budget far beyond their usual heft.

“Ms. Engelbrecht advised [Eshelman] that the expected cost of the Validate the Vote effort would be $7,325,000,” the lawsuit states.

According to the lawsuit, the plan was to have Republican powerhouse lawyer James Bopp file lawsuits in the seven closest battleground states, serve state election officials with subpoenas, and use the resulting data to flag irregularities. A GOP stalwart, Bopp led party’s Citizens United lawsuit to Supreme Court ruling that opened the floodgates to corporate money in elections through the rise of super PACs.

But the dream team did not attain the results Eshelman says he expected, and their lawsuits collapsed.

True the Vote, Engelbrecht and Bopp did not immediately respond to phone calls and emails requesting comment. Only the charity is listed as a defendant.

Eshelman says that he sought “specific and actionable updates” on the investigation and lawsuit, only to receive nothing but “vague responses, platitudes, and empty promises of follow-up that never occurred.”

“Specifically, in response to requests for specific and data relating to potential whistleblowers and how their allegations fit into an overall narrative, Ms. Engelbrecht would simply respond with vague comments like: ‘We are vetting’ or ‘They are solid,'” the complaint states.

But Eshelman notes that the memos, reporters and whistleblowers never came, and all that he received in their place were four complaints filed in four states: Wisconsin, Michigan, Georgia, and Pennsylvania. All of the complaints were voluntarily dismissed, in a decision the investor claims had been made “in concert with counsel for the Trump campaign.”

In the Wisconsin case, Bopp promised that “evidence will be shortly forthcoming” before withdrawing their complaint without that evidence on the morning of the hearing.

The next day, Eshelman sent the following email to the charity’s president.

“Please wire the balance of my contributions to my account as shown below,” Eshelman wrote in a Nov. 17 email included as an exhibit to the complaint. “Also send a full accounting of all monies spent out of the $2.5M, which should be de minimis since nothing was accomplished over the 10 or so days.”

On Nov. 22, some five days later, Engelbrecht responded: “Since Mr. Eshelman asked for his money back, we have started to put together the costs and expenses of the project that he helped fund,” describing what she characterized as hurdles to meeting that request.

The message did not appear to satisfy Eshelman’s attorney Ron Jacobs, from the Washington, D.C.-based firm Venable LLP.

“If we see the $2 million set to wire, we can hold off on filing the lawsuit in federal district court that we are preparing, which will seek a full refund, plus attorney’s fees and damages,” Jacobs wrote.

Eshelman’s lawyers filed the lawsuit in the Southern District of Texas on Wednesday, in a complaint signed by local counsel Meghan McCaig from the Dallas-based Thompson & Knight, who did not immediately respond to an email requesting comment.

A deep-pocketed Trump supporter, Eshelman maxed out twice with separate $2,700 donations to his campaign and a $100,000 donation to the political action committee Trump Victory in 2017, public records show.

Read the lawsuit and exhibits below: