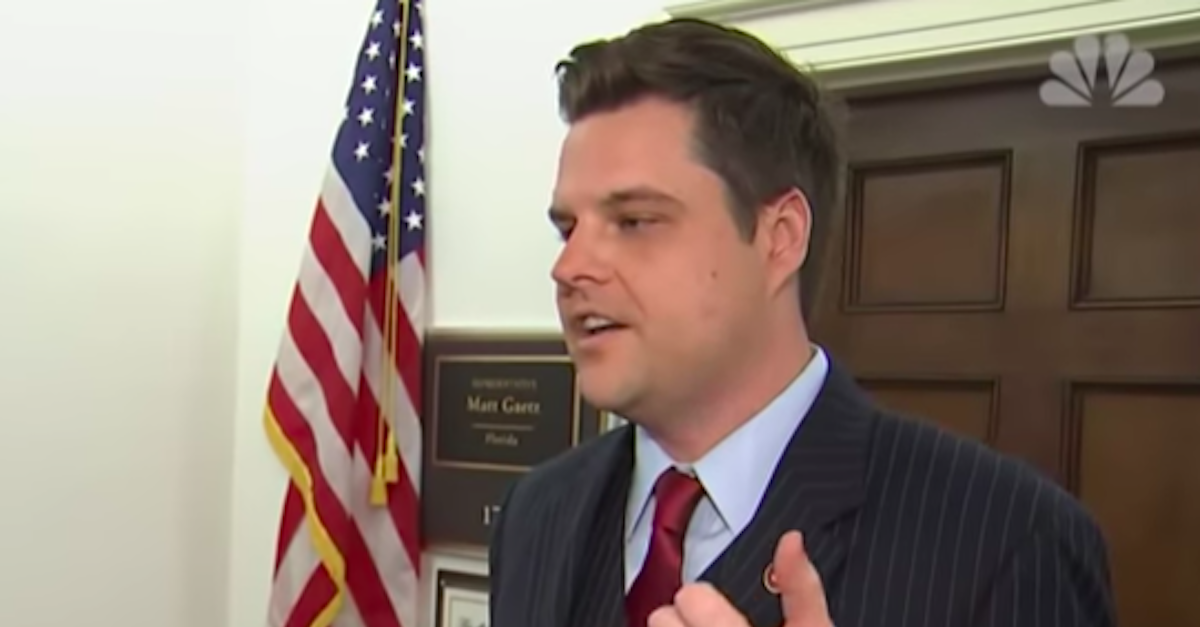 Republican U.S. Rep. Matt Gaetz of Florida on Friday responded to a months-old tweet by Andrew Gillum (D) that featured Gaetz’s DUI mugshot and the words, “There is only one criminal between the two of us…YOU!!!”

Gillum, a CNN contributor and former mayor of Tallahassee, tweeted that on November 22, 2019. Fast forward to early Friday morning and Gillum’s name was included in a Miami Beach police report about a suspected drug overdose. Gillum, a Democratic Party 2018 gubernatorial candidate who lost to Republican Ron DeSantis, was involved in a so-called “crystal meth incident.”

The police report said that Gillum was vomiting and too “inebriated” to communicate with officers while another man in a hotel room was overdosing on methamphetamine. That man was treated for a “possible drug overdose.”  Per the police report:

Officers then made contact with two other males who were inside of the hotel room: Aldo Mejias (complainant) and Andrew Gillum (involved other). Mr. Mejias stated the following to officers: Mr. Mejias provided his credit card information to Travis Dyson to rent a hotel room for the night; Mr. Mejias was to meet Mr. Dyson later in day. Travis Dyson rented the room at approximately 1600 hours on 03/12/2020. Mr. Mejias arrived at the hotel at approximately 2307 hours, where he discovered Travis Dyson and Andrew Gillum inside the room under the influence of an unknown substance. Per Mr. Mejias, Mr. Dyson opened the hotel room door and immediately walked over to the bed and collapsed in a prone position. Mr. Mejias observed Mr. Gillum inside of the bathroom vomiting. Mr. Mejias stated that he observed Mr. Dyson having difficulty breathing, prompting him to wake him up. Mr. Dyson then began vomiting on the bed and immediately collapsed again. Mr. Mejias began conducting chest compressions on Mr. Dyson and proceeded to contact police fire rescue.

Officers then attempted to speak to Mr. Gillum. Mr. Gillum was unable to communicate with officers due to his inebriated state.

In a statement, Gillum denied ever using meth and said he had too much to drink.

“I was in Miami last night for a wedding celebration when first responders were called to assist one of my friends. While I had too much to drink, I want to be clear that I have never used methamphetamines,” he said. “I apologize to the people of Florida for the distraction this has caused our movement. I’m thankful to the incredible Miami Beach EMS team for their efforts. I will spend the next few weeks with my family and appreciate privacy during this time.”

But Gaetz said Gillum was “methed-out.”

There is only one of us who gets methed-out in hotel rooms with guys in Miami…..YOU!!! https://t.co/HgbuMbpEnm

“There is only one of us who gets methed-out in hotel rooms with guys in Miami…..YOU!!!” the recently self-quarantined Republican said.

“Everyone should respect @AndrewGillum’s privacy as he explains why he was one of three men in a hotel room w 3 bags of meth, too impaired to talk to first responders,” Gaetz said in a separate tweet. “I know what you’re all thinking – this is not very COVID-19 hygienic. #GillumSurge”

Everyone should respect @AndrewGillum’s privacy as he explains why he was one of three men in a hotel room w 3 bags of meth, too impaired to talk to first responders.

I know what you’re all thinking – this is not very COVID-19 hygienic. #GillumSurge https://t.co/HVjBDNRlZA

Police said they “observed in plain sight three small clear plastic baggies containing suspected crystal meth on both the bed and floor of the hotel room.”

“Mr. Gillum left the hotel room and returned to his residence without incident,” the police report said.

The incident is not presently being investigated as a criminal matter.