Lisa Page: Trump’s Rally Claim That I Needed Restraining Order Against Strzok Is a Flat-Out ‘Lie’ 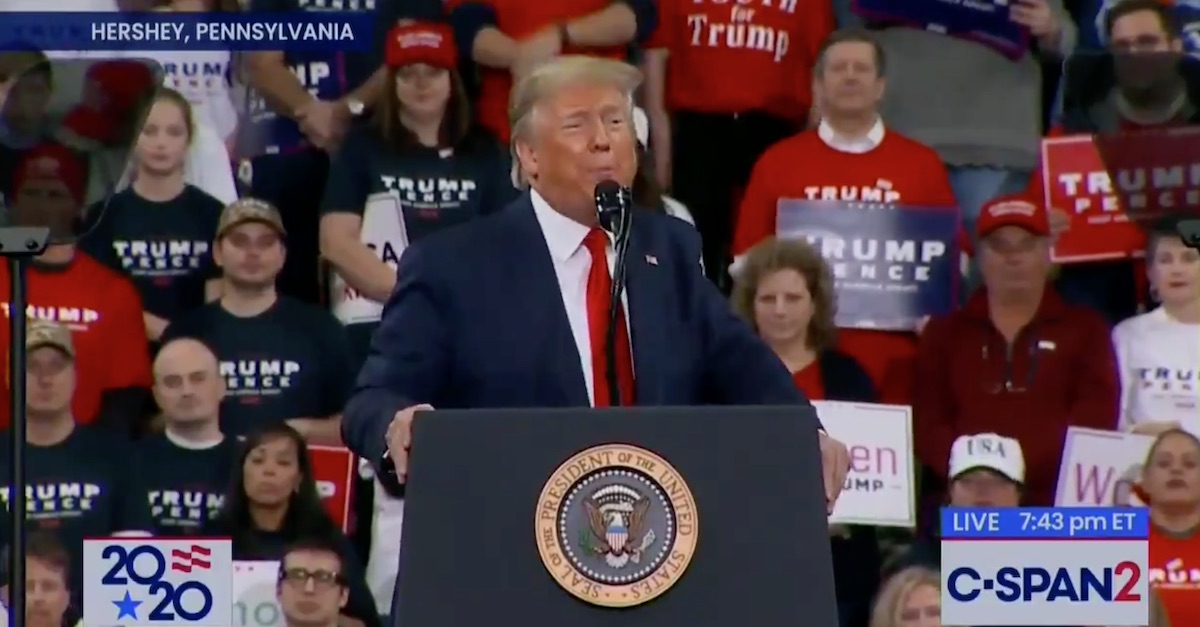 A day after the Department of Justice’s Office of Inspector General released the findings of his review of the FBI’s “Crossfire Hurricane” investigation, President Donald Trump hit the road for a rally in Hershey, Pennsylvania, and once again invoked the names of former FBI lawyer Lisa Page and former FBI agent Peter Strzok.

At one point in the rally, Trump spent about a minute telling a tale of unknowns. He said he heard but wasn’t sure if it was true that Page had to get a restraining order to keep Strzok away from her. The president’s words:

This poor guy. Did I hear he needed a restraining order after this whole thing to keep him away from Lisa? That’s what I heard. I don’t know if it’s true. The fake news will never report it. But it could be true. No, that’s what I heard. I don’t know. I mean, who could believe a thing like that. No, I heard that Peter Strzok needed a restraining order to keep him away from his once lover. Ahh, Lisa I hope you miss him. Lisa, he’ll never be the same.

Page responded to this on Wednesday morning.

This is a lie. Nothing like this ever happened.

I wish we had a president who knew how to act like one. SAD!https://t.co/7YQaQRxWzu

“This is a lie. Nothing like this ever happened,” she said. “I wish we had a president who knew how to act like one. SAD!”

Page, who together with Strzok became household names due to the president’s repeated attacks on them for their anti-Trump texts, fired off a couple of tweets on Monday in response to the OIG report. Page said she was vindicated:

And the President repeatedly accusing me of bias and treason;

Inspector General Michael Horowitz’s report identified numerous failures by the FBI, but did not find evidence that the FBI was motivated by political bias in opening the “Crossfire Hurricane” investigation.

“I’m done being quiet,” she said, linking to the article.

Page said President Trump faking an orgasm while invoking her name at a different rally was the last straw.

“Honestly, his demeaning fake orgasm was really the straw that broke the camel’s back,” Page said.

Page also believes the Trump administration’s release of her text messages with Strzok were an act of political retribution against them.

“Those texts were selected for their political impact. They lack a lot of context. Many of them aren’t even about him or me,” she said.

The DOJ claimed otherwise, but Page filed a lawsuit on Tuesday.