Harvard Law Prof: Dershowitz’s Argument Means Trump Can Round Up Black People to Prevent Them from Voting for a Democrat 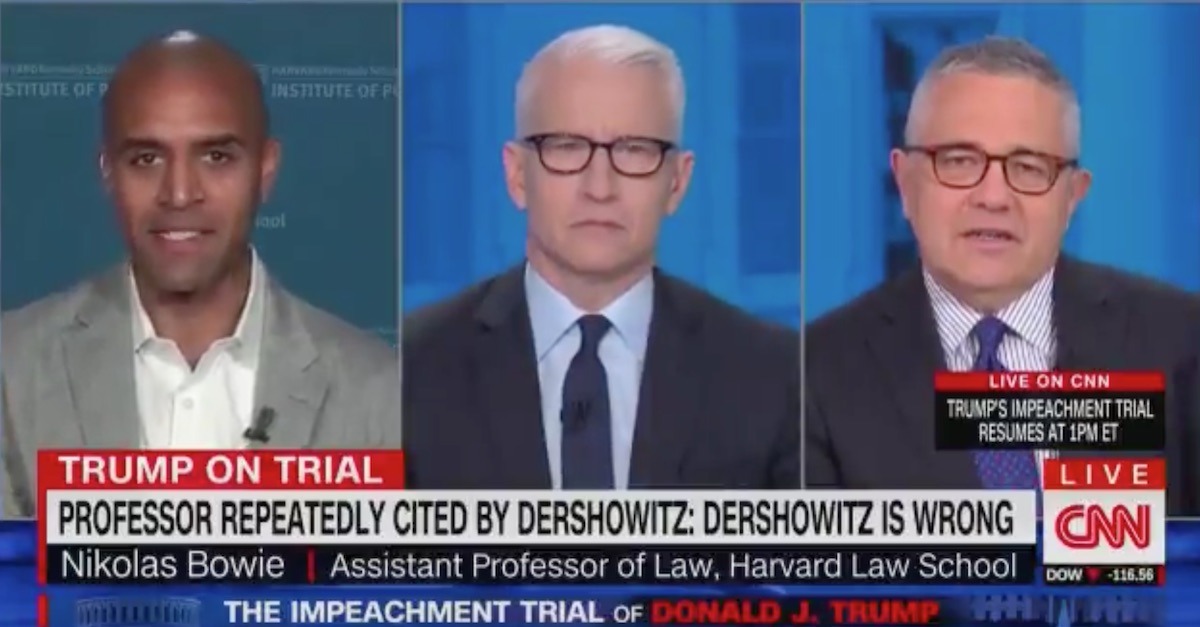 A Harvard Law professor–who Alan Dershowitz cited as helpful to his defense of President Donald Trump–responded on Thursday to Dershowitz’s wild argument that “If a president does something that he thinks will help him get elected, in the public interest, that cannot be the kind of quid pro quo that results in impeachment.”

Professor Nikolas Bowie not only called that argument a “joke” and “irresponsible,” he also came up with an extreme hypothetical to make a point about the logical end of said argument (see 3-minute mark).

Harvard Law assistant professor Nikolas Bowie, who Trump lawyer Alan Dershowitz has repeatedly cited, says that Dershowitz is misconstruing his views. “That is such an irresponsible and ludicrous argument,” Bowie says. https://t.co/vUmzLvc8yX pic.twitter.com/vMVWl1Pp0R

Bowie wrote three days ago, “Don’t Be Confused by Trump’s Defense. What He Is Accused of Are Crimes.” Despite that, Harvard Law professor emeritus Dershowitz cited Bowie’s New York Times op-ed, saying, “He thinks I’m wrong and yet he agrees with me that maladministration, abuse of power and abuse of office are essentially the same. I’m not quoting him for his conclusion. I’m quoting him for the point that you just made saying no scholars think that abuse of power is the same as maladministration.”

“The best you can do is quote a scholar who thinks you’re wrong?” CNN legal analyst Jeffrey Toobin shot back.

The bottom line: Bowie believes that abuse of power is a common law crime and impeachable; Dershowitz takes the position that even if Trump is guilty of what he is accused of, that’s not an impeachable offense.

Dershowitz says his argument is being “willfully distorted.”

They characterized my argument as if I had said that if a president believes that his re-election was in the national interest, he can do anything. I said nothing like that, as anyone who actually heard what I said can attest.

Here was his updated take:

What I said was that there are 3 broad categories of relevant motive:
1) pure national interest ( help the military)
2) pure corrupt motive ( get a kickback) And 3) mixed motive (help the national interest in a way that helps your reelection efforts )
(MTC)

I gave as an example mixed motive President Lindon’s decision to send troops home from the battlefield to Indiana so that they would vote for his party. He genuinely believed that his party’s victory in Indiana was essential to the war effort, but it also helped him politically.