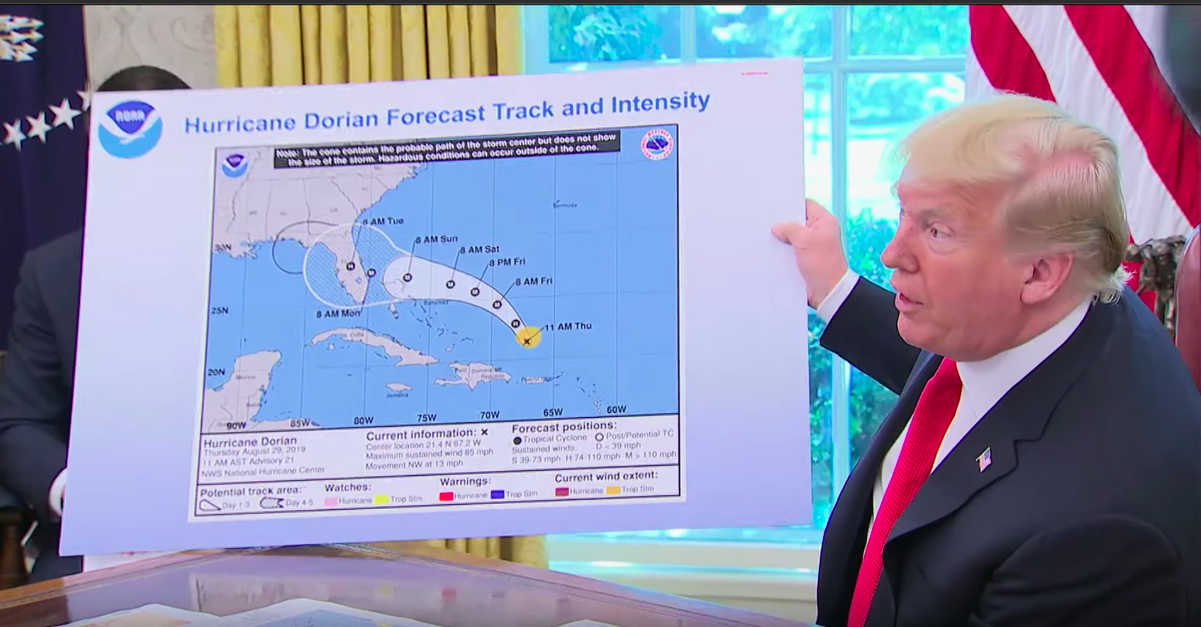 New emails reveal that several of the top scientists at the National Oceanic and Atmospheric Administration (NOAA) were dismayed when political appointees from the Trump administration released an unsigned statement critical of a National Weather Service (NWS) forecast correcting the president’s incorrect assertion regarding Hurricane Dorian.

The emails, obtained through a Freedom of Information Act (FOIA) request, show career scientists expressing extreme frustration at the administration’s decision to intervene and politicize the agency messages in an effort to defend President Donald Trump’s assertion that Alabama would “most likely be hit (much) harder than anticipated.”

The trove of documents appeared to confirm that Trump appointee Julie Roberts, a former campaign official with no science background, approved the unsigned NOAA statement.

FINALLY, some much needed confirmation that the unsigned and widely condemned NOAA statement last September backing Trump on Hurricane Dorian was worked on by Trump appointee Julie Roberts and then acting administrator Neil Jacobs#FOIA pic.twitter.com/EMX13SCvBH

In one of the email exchanges, Ret. Rear Adm. Tim Gallaudet, the second ranking NOAA official, appears to tell NWS chief operating officer John Murphy that he’s seriously contemplating resigning from his post over the incident.

“Thank you John. I track all of NWS on social media, so I see the emotion, but honestly get it. I’m having a hard time not departing the pattern right now,” Gallaudet wrote.

“Hang in there sir,” Murphy replied. “Need you and judgement we make nearly every day since we have pension. Is this battle to die for or better to stay and fight for what’s right,” adding, “we can do more in pattern.”

In another email to NOAA and NWS leaders, NOAA’s acting chief scientist Craig McLean said he was “flabbergasted” and “embarrassed” by the statement defending Trump’s inaccurate forecast.

“What’s next? Climate science is a hoax?” McLean wrote. “Flabbergasted to leave our forecasters hanging in the political wind. Embarrassed.”

"What’s next? Climate science is a hoax?
Flabbergasted to leave our forecasters hanging in the political wind.
Embarrassed" pic.twitter.com/6YlOM6kxER

McLean, who went on to launch a public integrity investigation into the incident, followed up the next day, calling the unsigned statement “unconscionable.”

“For an agency founded upon and recognized for determining scientific truths, trusted by the public, and responsible in law to put forward important science information, I find it unconscionable that an anonymous voice inside of NOAA would be found to castigate a dutiful, correct, and loyal NWS Forecaster who spoke the truth,” he wrote.

The emails also confirmed suspicions that the controversial map displayed by President Trump in the Oval Office to defend his forecast was indeed doctored with a marker.

WOW!! BIG FIND in the NOAA #FOIA document dump tonight by @chrisgeidner re: Hurricane Dorian and the map Trump showed during the WH briefing

"Yes that was doctored" pic.twitter.com/DOUBKl5Vii