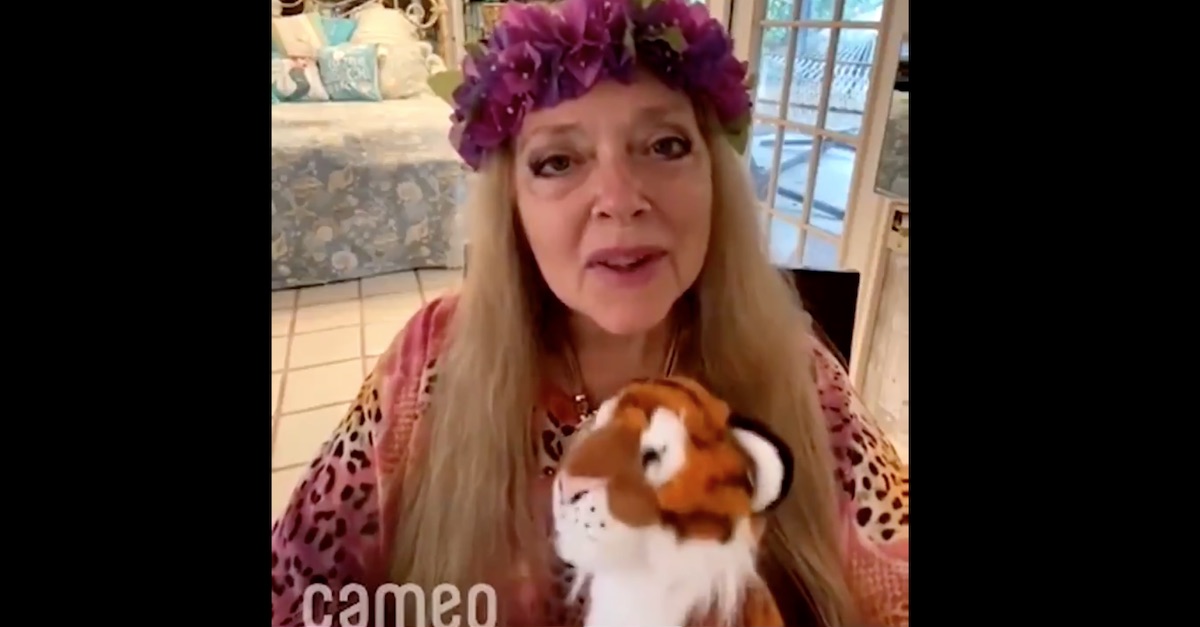 These days, it does seem like the Tiger King part of 2020 happened decades ago. But Carole Baskin just brought it back, for at least one more news cycle. Australian comedian Tom Armstrong pranked Baskin into recording a video birthday message for infamous sex offenders Rolf Harris and Jimmy Savile, and to be honest, it’s the wildest thing we’ve seen since Saff’s unbelievably gracious attitude about having her arm ripped off.

Harris is Australian entertainer whose career came to a quick end when, at age 84, was convicted in 2014 for sexually assaulting underage girls. He is well known in the UK for his songs, “Tie Me Kangaroo Down, Sport” and “Two Little Boys“, for playing the didgeridoo, and inventing the wobble board. Harris was sentenced to five years in prison for assaulting four teenage girls during the 1970s and 80s, and was released in 2017 after serving three years. His disgrace is well-known throughout the UK, and after his conviction, he was stripped of many of the honors he’d received during his career.

Jimmy Savile was an English television and radio personality who died in 2011. After Savile’s death, police investigated some of the hundreds of allegations of sexual abuse against him. They concluded that Savile had been one of Britain’s most prolific sexual predators.

The video, which you can view below, shows Baskin giving one of her, “hey all you cats and kittens” shout-out to Rolf and Harris.  Blissfully unaware of the double-entendres, Baskin said, “Hi Rolf Harris! All your kids wanted to get together and tell you that you have really touched them and that they love all that you have done for them. I hear that there’s a lot of great stories about you and your best friend Jimmy Savile. Can’t wait to hear those! Happy Birthday, Rolf!”

According to Metro.co.uk, Baskin issued a statement saying that she was unfamiliar with both Harris and Saville, and that had she known who they were, she would never have recorded this video.

“I am amazed at the lengths (and expense) people will go to in order to trash my reputation,” Baskin reportedly said.

Reactions to the prank were pretty unsympathetic on a number of fronts:

Apparently Carole Baskin was “tricked”. Yeah, because we’ve hidden the fact that Rolf Harris and “Jimmy Saveel” are child abusers so well and Google doesn’t exist.

#carolebaskin #rolfharris #jimmysaville these three names trending…. i was worried it was the sex tape we all never ever ever want to see

This is simply fantastic.

Rolf Harris and Jimmy Saville and “the great stories with the kids”.

Carole Baskin is an imbecile. Unhinged. A possible murderer. And now the subject of a good old British prank. https://t.co/oH9pt0CvZP

Others found the prank insulting and disrespectful to Harris and Savile’s victims, cruel to Baskin, and hypocritical.

Getting Carole Baskin to read out lines like ‘kids are really touched by you’ in a prank name checking Rolf Harris and Jimmy Saville is vile.
It isn’t funny or ‘comedy’.

So cross by this.
Child abuse is not amusing.

Imagine being a survivor of child SA by Rolf Harris or Jimmy Savile (or frankly anyone) & being the butt of a joke by someone who thinks it’s funny to prank Carole Baskin. If you wanted to prank her you could have got her to say Drew Peacock/Hugh Janus/any made up name. Fuckwits.

"she murdered her husband!!" they yell, based on zero evidence, while two guys are portrayed very transparently as relentless sexual predators throughout the entire series, i wonder what the reason for that realigned focus could be