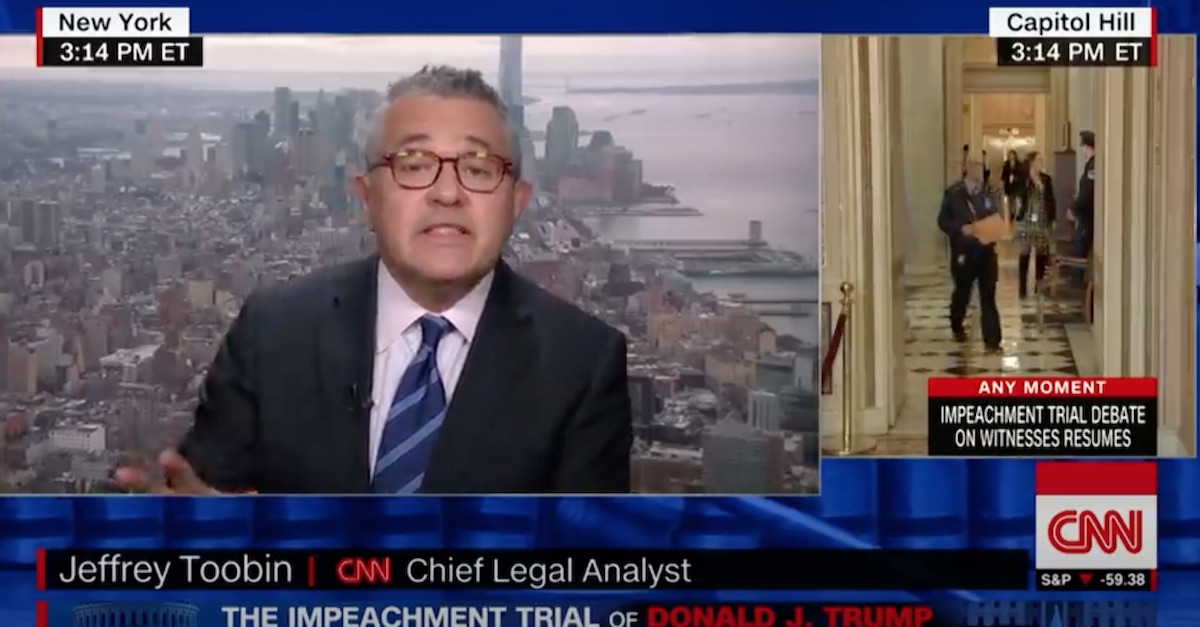 In “Horrified by Jeffrey Toobin’s penis? Put it away, for now,” the Toronto Star’s Vinay Menon insists that the bigger picture concern is that Toobin’s legal analysis is vital to saving America, therefore this peccadillo ought to be forgotten immediately:

Toobin may not grasp streaming technology. He may well be cursed with the hormones of a randy teenager. But he also has one of the sharpest legal minds on the continent. He cuts through the noise. He brings deep context to shallow airwaves. As a writer and broadcaster, he is everything we need, now more than ever: smart, thoughtful, insightful, incisive and knowledgeable.

Toobin has been suspended by the New Yorker pending the outcome of an investigation; a CNN spokesperson told Law&Crime that Toobin has “asked for some time off while he deals with a personal issue, which we have granted.”

Toobin did not deny that the incident occurred. Instead, he apologized to his wife, family, and co-workers.

“I made an embarrassingly stupid mistake, believing I was off-camera. I apologize to my wife, family, friends and co-workers,” Toobin told VICE.  “I thought no one on the Zoom call could see me. I thought I had muted the Zoom video.”

Journalists, whether on Twitter or in news articles, have already predicted that essentially nothing will result from the suspension-cum-leave session.

A CNN “insider,” for example, reportedly said that Toobin would “probably” return to a television screen near you after enough time passes and the narrative shifts to more important things. Others have argued that the Zoom incident should be judged in light of Toobin’s past.

Menon argues Toobin’s “election-simulation-turned-erection-stimulation” harmed only Toobin, and for that reason—combined with an urgent need for Toobin to “service” America—the legal analyst’s “embarrassingly stupid mistake” admission should be the end of this.

“He made an embarrassingly stupid mistake,” the column ended. “Let’s leave it at that and get on with saving America.”